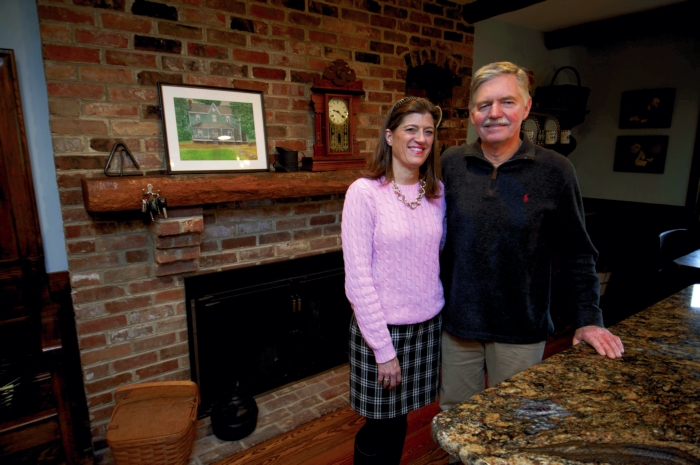 Barbara and Darryl Corriher pose in the kitchen that has a working fireplace. Preparations for the the annual China Grove Tour of homes to benefit the Historical Society of South Rowan are underway. Two of the featured homes are just across the road from each other on Corriher Springs Road. The circa 1901 farmhouse owned by the Corrihers offers a peek into country living with modern convienences, while the home of neighbors Wyatt and Dianne Clark is a stately brick ranch built in 1957 that has been remodeled with many upgrades. Jon C. Lakey/Salisbury Post

Darryl recalls spending summer days eating slices of watermelon at his grandparents’ house. He live just across Corriher Springs Road as a child and remembered receiving a puppy one year for Christmas.

Both houses look a bit different now. They’ve both been recently remodeled, but the Corriher family history remains.

In 1901, Darryl’s grandparents, Moses and Geneva Corriher, purchased 150 acres of land in southeastern Rowan County. Moses and Geneva built a two-story farm house on the land between 1901 and 1905. Darryl’s parents built a house a few hundred yards away in 1957. Both houses’ updated interiors will be on display during the Historical Society of South Rowan’s Christmas Tour of Homes in early December. They’re joined by a Miller Road house that dates back to 1859 and a 2001 house on Weaver Road.

Darryl moved into the early 1900s home in 1980 and remodeled it. Darryl and his wife Barbara officially became the second family to live in the house when they were married eight years later. The latest remodel wrapped up recently. Wyatt and Dianne, who run a contracting business, did the remodel and are in the midst of doing final checks on the house.

“I think one of the reasons we enjoy living in this house is because of its history, connections to the past, and because of its character,” Darryl said. “It’s changed over the years. We didn’t try to keep it completely historically accurate because you change a house so much each time your remodel.”

Besides interior remodeling work, the house has changed significantly since initial construction. Barbara said there are at least four separate additions.

“Even with all the work, we still want the house to show that it’s been here for a long time,” Barbara said. “We want to show the house has a life and it has changed.”

The house interior and exterior characteristics make the Corriher history easy to see.

Large windows in the kitchen and living room provide views to nearby farm fields. Like his grandparents, Darryl is a farmer. He mostly grows corn and soybeans. Like his farming peers in Rowan, the 2015 growing season was rough and provided little rain. The recent deluge, he said, doesn’t provide much benefit for currently growing crops.

Multiple pictures hung inside the house show early days of the Corriher’s life on the 150 acres. In one, a Corriher child is holding a slice of watermelon that’s nearly as large as his body.

One of the dated pictures hanging inside the house is a direct shot of what it looked like shortly after construction. Since then, walls have been added and removed to create new rooms. Some rooms have been repurposed.

A room that contains a piano and pump organ was previously a bedroom. Darryl and Barbara’s bedroom was a “music room.”

“It’s changed a lot actually, but all the time we’ve tried to keep the character of an old house,” Darryl said.

A wall separating the house’s kitchen from the living room is actually exterior wood.

The house contains a number of family antiques, including a handmade quilt and original kitchen table. The christening gown that belonged to Karl Corriher — Darryl’s father — is also on display.

The pump organ is original to the family, but came from just across the street — at the house owned by Wyatt and Dianne Clark.

The Clarks don’t quite have the same lengthy family history on Corriher Springs Road. In fact, Dianne says their move to the area was somewhat of a coincidence.

At the time, Dianne and Wyatt both swear they weren’t looking to purchase a house. Dianne says she wanted to show Wyatt a house she liked in on N.C. Highway 152 in Rowan County.

So they took a Sunday afternoon drive. Wyatt said he didn’t like the house on N.C. 152 because of its location.

At one point, Wyatt said, they simply found themselves driving down a rural road in Rowan County. A small “for sale” sign sat in front of a house on Corriher Springs Road. Dianne and Wyatt pulled into the driveway and called the number on the sign. And just like that, they began the process of purchasing a home.

“Wyatt and I just believe that it was our destiny to find this house,” Dianne said. “We felt very blessed to have found the house and to have Darryl and Barbara’s blessing on the work that we planned to do at the house.”

“Because it all came off of this property, we didn’t want to change anything related to the interior trim,” Dianne said. “All we basically did was put a fresh coat of paint on it.”

The home’s living room is one example of the numerous physical changes to the house. During renovations, the Clarks shortened the living room’s length.

“It was well-maintained, but just a little dated,” Dianne said. “Nothing had been done to it, which was something that appealed to Wyatt. There had been no additions, so it was literally the same as it was in 1957.”

Dianne called the house’s entryway impressive. It’s much the same as original construction.

“When you think about it, it was pretty impressive to have such a large foyer with double coat closets,” she said.

Some of the renovations include changing a feed and fertilizer building into an outdoor pavilion.

The Clarks have also converted the basement into an impressive man cave. In the basement are a number of taxidermied deer and even an alligator. Wyatt, an avid hunter, said the alligator is the product of a Florida hunt with family members.

The basement also contains a full kitchen that previously was used by the Corrihers for canning.

The entirety of both homes will be on display during the Christmas Tour of Homes, which is December 5. Buses leave from the China Grove Roller Mill at 4 p.m. and 6 p.m., when tours start. Dinner will be served at the roller mill.

For information about the Roller Mill or to buy tickets, call Judy Haire at 704-425-5323. Tickets are $30 each and include tour, meal and bus transportation to the homes. Tickets are limited to 100 guests.