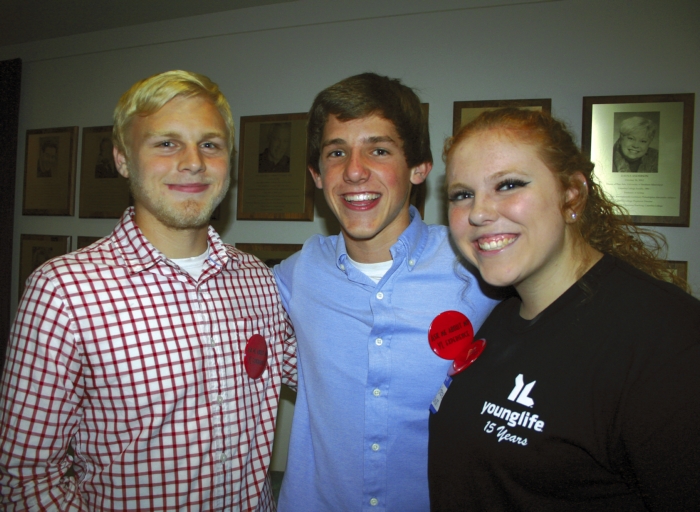 This year, Young Life is celebrating 15 years in Rowan County, and the group’s leaders can’t wait to see what the next 15 years will bring.

The organization sponsors meetings similar to those of church youth groups, but the meetings take place in schools. This year, Young Life has students participating in every Rowan County high school — along with Gray Stone Day School — and has clubs in every high school but North Rowan.

Students from South Rowan High School were especially excited that Young Life started this fall at their school.

“A lot of my friends from other schools go to Young Life,” said junior Hannah Lambert. “It really excited me. I was hoping we could get it at South.”

“He went to camp and just fell in love with Young Life,” said his mom, Laurie. “I don’t think he’s missed a meeting. It’s a good support system for students. They do lift each other up.”

“Everything is so much fun,” Cameron said. “You never have a bad time. I can’t believe how much fun it is. I just wanted all my friends at South to have it.”

Cameron is a member of First Reformed Church in Landis. Young Life, he said, has helped him grow in his faith.

“They never pressure you into anything,” he said. “They always support you. It’s always a great experience to get closer to Jesus.”

Hunter Smith is a sophomore at Carson. His older sister, Katie, was involved in Young Life, and encouraged him to get involved.

“Lauren Gaskill was one of those seniors who took me under her wing,” she said. “She invited me to Young Life. I went once, and I was hooked. It’s contagious!”

“The school administrations are open to Young Life,” Kehoe said. “Our goal is to introduce adolescents to Jesus Christ, and help them grow in their faith. We feel like Young Life is for every kind of kid.”

Clubs typically meet in the evenings, and feature songs, games and skits.

Once a month, clubs from all over Rowan County meet at Life Church. The Rev. Chris Shelton is the church’s lead pastor.

“I remember starting out as a youth pastor over 15 years ago, having no idea how to ‘do’ youth ministry,” he said Wednesday. “It was around that time I became familiar with Young Life, and began joining other leaders for weekly visits to the schools.  I eventually started spending more and more time at the schools, where I was able to have a far greater and more widespread impact in the lives of local teenagers than I ever would by waiting for kids to come to me.

“This is what Young Life is about and why I have been such an admirer and avid supporter of this ministry ever since. Young Life is about taking church to students on their turf, right where they are, just as they are. It’s not about waiting for kids to get their acts together and their lives cleaned-up before they belong — they already do. I don’t know of a better way to represent the ministry of Jesus and have a more positive impact in the lives of our local teens than this.”

Bryan and Meredith Overcash serve on the Young Life committee, and were one of Saturday evening’s main sponsors, along with Dem and Susan Ward.

“We just really believe in Young Life’s mission to reach out to high school kids,” Overcash said. “This reaches out to kids — in a fun way — who are seeking to hear the Good News. We’ve been blessed with great leaders and great staff.”

In 2000, Chris Fowler was hired as Young Life’s first director, and the first club meeting for Salisbury High School took place in the basement of George and Shirley Everhart’s house. Over the years, Young Life has spread throughout the county to the other high schools. Students from North Rowan who attended the banquet said they were eager to have their own club.

Bennett said that the purpose of the banquet was two-fold: to celebrate the impact of Young Life over the past 15 years, and to give the community the change to invest in Young Life for the next 15 years.

The Wards were honored for their involvement in Young Life.

“We wouldn’t be reaching the kids we are reaching without them,” Kehoe said. “They really are the face of Young Life in our community.”

One West Rowan student talked about her struggles with depression after she was sexually abused by a family friend. Her parents had divorced years earlier.

“I just felt alone all the time,” she said. Then she went to Young Life. “You automatically love Young Life. You just feel you’re the best person in the world. I was surrounded by great people, and I went to club every week.”

At summer camp, she said, she discovered all her cabin mates “had their own stuff (they were dealing with). I found out I wasn’t alone.”

She said of Young Life, “This is the best thing that ever happened to me.”

Fowler was Joe Hartsell’s Young Life leader. Now 30, Hartsell recalled, “Life was fun for me. I was popular. I was good at sports. I was incredibly handsome.”

The crowd chuckled before the 6-foot, 4-inch tall Hartsell continued.

“But I struggled like every other high school student struggled,” he said. “I struggled to fill that hole that could only be filled by Jesus.”

Hartsell said that Young Life “was constantly weaving God’s intention into my life that always kept me seeking him.”

He added, “Let’s invest in the next 15 years together.”

Meredith Overcash said Wednesday that the organization was still accepting pledges and donations toward its $60,000 goal.

For more information about Young Life and how to donate, visit rowancounty.younglife.org.