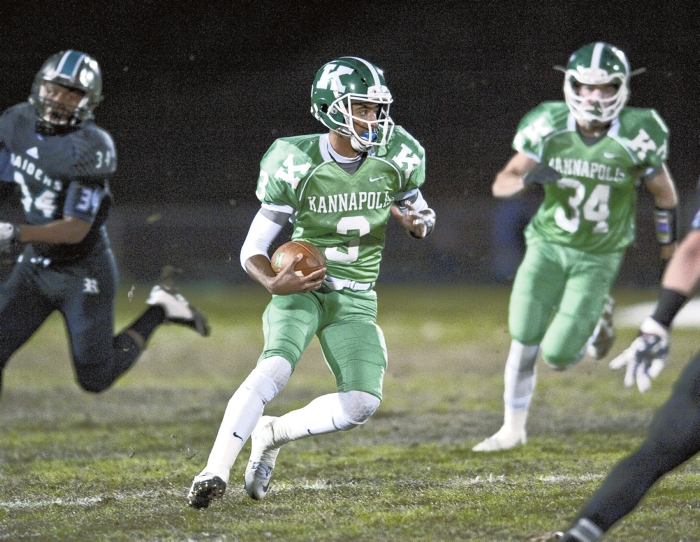 Lauren Carroll/Winston-Salem Journal ... A.L .Brown quarterback Damon Johnson (3) runs the ball during the first-round playoff game at Pfafftown Reagan on Friday night. The Wonders held on for a 35-32 victory.

PFAFFTOWN – Reagan looked down and out early in the fourth quarter, but a last-second 51-

yard field goal attempt by Isaiah Anthony missed wide left to give No. 12 Kannapolis Brown a 35-32

win over No. 5 Reagan in the first round of the NCHSAA Class 4-A playoffs.

“I’m proud of the effort,” coach Josh McGee of Reagan (8-4) said. “It’s what our program stands

for. “We believe in playing with relentless effort and playing for 48 minutes or as long as it takes.

Our guys did that tonight. My heart breaks for these guys, especially our seniors. I’m proud to be

Trey Sullivan, who pitched in for starting quarterback Ben Skradski after Skradski sprained his

ankle with seven minutes left in the fourth quarter, took over with the Raiders down 35-32 at their

own 24 with 1:18 left. Nine plays later, Sullivan threw it 19 yards to Charlie Rhoades to the

Sullivan with 3:30 left. With no timeouts left, Sullivan quickly got to the line and spiked the ball with

“We’re always going to fight because we’re trying to give ourselves a chance,” Anthony said of

the field-goal attempt. “I’m always prepared for something like that.”

McGee said he wouldn’t have wanted to have been in Anthony’s position, trying to tie the game

with a 51-yard field goal attempt.

Sullivan held the ball for Anthony and said he full confidence that he would make the field goal.

“I think he’s the best kicker in the state,” Sullivan said. “I thought he was going to make it, but he

by Nate Williams with 11:39. Running back Sandon McCoy led the Wonders with 243 yards on 23

“No, I did not (think it was going to come down to a field-goal attempt,” McCoy said. “I kept saying

I had to run even harder.”

Coach Mike Newsome of the Wonders said he wasn’t surprised the Raiders came back. Brown

“They score too fast for you not to think that,” Newsome said. “I said the whole time on the

team that scores with the ball as much as they do.”

McGee said the Raiders you have to play your best in the playoffs.

“You’ve got to bring you’re A game in order to advance, and we didn’t quite bring our A game

tonight,” McGee said. “But we brought a game that was full of effort and pride, and again, just

North Rowan loses to Carver in first round