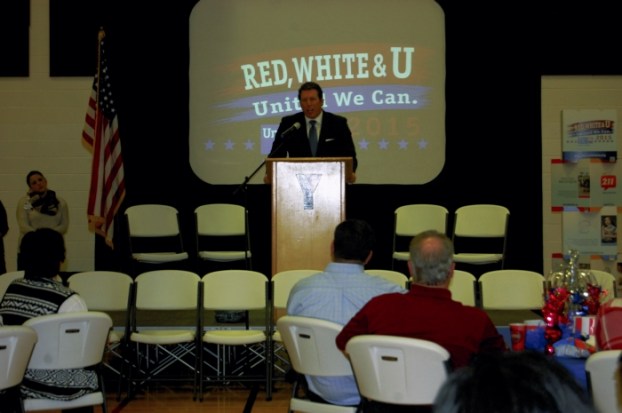 Amanda Raymond/Salisbury Post United Way Board of Directors President Steve Fisher announced the organization's fundraising is going into overtime during Friday's finale after only raising 84 percent of their goal.

The United Way fundraising campaign is going into overtime.

The Rowan County United Way held its finale meeting at the Hurley YMCA on Friday.

“There’s been a lot of work done over the past year, in particular over the last few months,” Greer-Link said. “The executive committee set a goal which we thought was attainable.”

But Greer-Link said the United Way is not done yet.

“Some would say we didn’t win today. I’m going to say otherwise,” she said.

Although the Presidents Division met the least percentage of their goal, only about 54 percent, it did have the heftiest goal — $760,000. The division raised $408,567, the highest total of all the divisions.

“We still have a lot of work to do and we’re going into overtime,” Greer-Link said. “The agencies and the citizens of Rowan County are counting on us to get that second wind.”

President of the Board of Directors Steve Fisher said he and the board did not anticipate coming short of the goal, but they will keep moving forward.

“It’s time for us to step up and keep marching on,” he said. “We can fill this gap.”

The winner of the car drawing was also announced. Greer-Link drew names from a box and the last name to be drawn was the winner. Rhonda Miller, a second grade teacher from Morgan Elementary School, won a car from Ben Mynatt Nissan.

“I am really so beside myself,” Miller said. “I’m glad that I had this opportunity to win and to support a good cause.”

The United Way kept with their patriotic theme with the Kiwanis Club of Salisbury serving hamburgers, hotdogs, potato chips and pie. The tables were decked out in red, white and blue tablecloths and decorations.

“These people have been phenomenal,” Greer-Link said about the cabinet members while tearing up. “I could not have chosen a better group of individuals.”

Fisher assured the crowd that the United Way has not given up on their goal.

“We’re in overtime, folks,” he said. “It’s time to dig deep because our agencies need us.”

Seniors at Rufty-Holmes taking technology by the horns

Seniors at Rufty-Holmes Senior Center are keeping abreast with the Information Age. Throwing off stereotypes, these tech-savvy seniors hold a... read more