To save Paris and the world, defeat ISIS 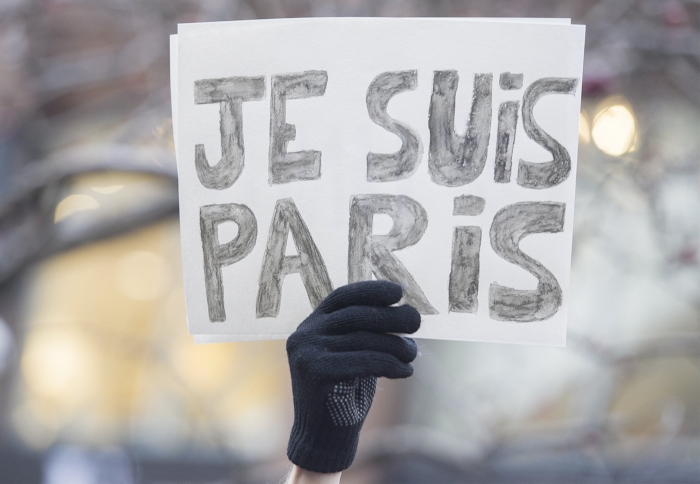 A man holds up a sign which reads, "Je Suis Paris" ("I Am Paris") during a rally of solidarity outside the Consulate of France in Montreal, Quebec, Canada on Saturday. AP photo

Excerpts from editorials and columns around the nation:

Crush ISIS: The Paris slaughter claimed by the Islamic State constitutes, as President François Hollande of France declared, an “act of war.” As such, it demands of all NATO states a collective response under Article 5 of the North Atlantic Treaty. This says that, “An armed attack against one or more of them in Europe or North America shall be considered an attack against them all.”

… The only adequate measure, after the killing of at least 129 people in Paris, is military, and the only objective commensurate with the ongoing threat is the crushing of ISIS and the elimination of its stronghold in Syria and Iraq. The barbaric terrorists exulting on social media at the blood they have spilled cannot be allowed any longer to control territory on which they are able to organize, finance, direct and plan their savagery.

Defiant & united: The coldblooded depravity with which the terrorists gunned down people seated at restaurant tables and picked off hostages in the Bataclan concert hall where more than 80 were killed was horrifying. But Parisians have remained defiant and united. Friday night, as the carnage unfolded, Parisians took to social media, using the hashtag #porteouverte, or “open door,” to offer sanctuary in their homes to people fleeing the mayhem. By morning, hundreds of Paris residents were lining up to donate blood and looking for other ways to help.

This attack will harden the resolve of the French against the savagery of the Islamic State, as it must the world’s.

Barbarians: The jihadist war against France is decades-old. France’s domestic intelligence services have spent years attempting to keep track of an ever-expanding list of radical French Islamists, and nobody should be surprised if Friday’s attackers turn out to be names on that list. Paris would not be out of bounds to consider some combination of preventive detentions and, if necessary, renditions to foreign countries. Civil libertarians will object, but civil liberty is also a function of security, and right now Paris has neither.

These attacks are another dreadful reminder that the West’s collective failure swiftly to defeat ISIS in its Syrian and Iraqi heartland has allowed this jihadist infection to spread—into Afghanistan, Turkey, Sinai and North Africa. …

On Friday France’s freedom of association was under assault, a fresh reminder that what’s ultimately at stake isn’t French Middle East policy. It’s French liberty. What’s needed now is a renewed sense of purpose to destroy the barbarians at the gate.

Destroy source: We should not view the appropriate American and Western response as “bringing these terrorists to justice,” in President Obama’s words. This is not a matter for the criminal law, as many American political and academic leaders, including the President, have insisted, even after the September 11, 2001, attacks.

This is a war, as President Hollande has forthrightly called it, not a slightly enhanced version of thieves knocking over the corner grocery store within an ordered civil society.  And the mechanism of response must be to destroy the source of the threat, not prosecute it, not contain it, not hope that we will “ultimately” destroy it.  “Ultimately” is too far away.

In the terrorists’ decision to target a football stadium and a concert hall, they declare a puritanical hatred for Western pleasures. … This dimension of the Paris attacks seems especially resonant, since for Americans the French capital has long stood for a particular kind of pleasure — the pleasures of civilization, of cosmopolitanism, of the cultivation of grace. …

This is not mere sentimentality, but an accurate reading of the terrorists’ intentions. When terror attacks the sites of such conviviality, rather than military bases or police headquarters, the reason is partly opportunism, but it is also to send a message: it is our pleasure, not just our power, that offends them.