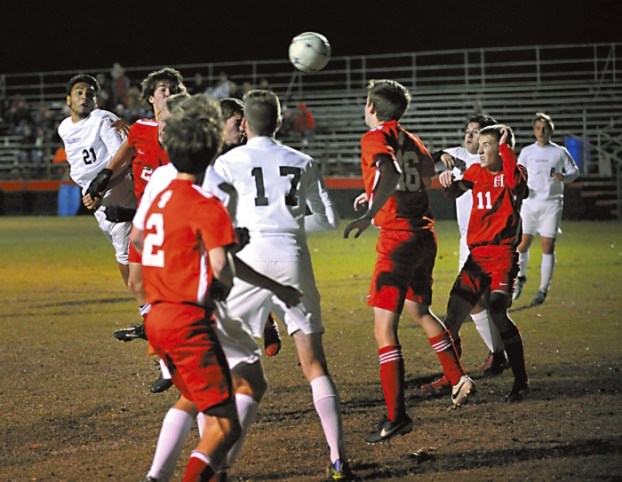 Wayne Hinshaw/for the Salisbury Post ... Salisbury’s Cristian Uribe (21, far left) heads the ball toward the goal. The Hornets improved to 25-0-2.

Salisbury moves into regional final with win over Hendersonville

On a night when prolific goal-scorer Landon Goodman was kept off the scoreboard, the top-seeded Hornets still clobbered visiting Hendersonville, 4-0, in the fourth round of the 2A state playoffs.

“We can’t rely on Landon every game,” winning keeper Arturo Ramirez said after Salisbury (25-0-2) reached the state semifinals. “If two people are marking him, someone else has to step up. But if Landon pulls two or three people, it means others are left open.”

Winning coach Matt Parrish understands you don’t surround the Mona Lisa with canvases from the starving-artist bin. So while the 64-goal scorer was effectively handcuffed by Hendersonville’s swarming defense, Salisbury was propelled by some not-so-usual suspects.

“I liked the fact that it didn’t have to be Landon Goodman,” Parrish said after Salisbury gained its 23rd straight victory. “There is a lot more to this team than Landon Goodman. Everybody knows how strong he is and I would never take anything away from him because he is a beast. But, to have three different guys put the ball in the net tonight shows we’ve got other weapons.”

Salisbury received early goals from defender Cristian Uribe and midfielder Kevin Flores — and a couple of late scores from halfback Ahmedin Salcinovic. It’s defense was paced by Josh Lynch, Reilly Gokey, Pedro Cruz and Uribe. Ramirez made five saves, including a diving stop to his left early in the second half, to help record the Hornets’ 15th shutout. “For me, this is probably the best defense in the state,” Ramirez said.

Salisbury used a signature play to open the scoring before the match was three-minutes old. From deep in the right corner, Lynch muscled a long throw-in to the goal crease that Uribe headed past Hendersonville keeper Martin Zambrano.

“That was a very significant throw-in,” Hendsonville coach Mark Sullivant said after the 13th-seeded Bearcats finished 18-7. “It literally went over the box, right to the far post. What a tremendous weapon.”

Lynch modestly declined credit for the play. “We’ve got this monster in the air,” he said of Uribe. “He wins everything.”

Added Salcinovic, with a smile: “It works every time.”

The Hornets doubled their lead in the 14th minute Flores took picture-perfect feed from Lynch and ripped a 12-yard shot past Zambrano. “That was such a big relief,” Uribe said. “We knew if we could get one more, it would be lights out.”

Instead, Salisbury’s second goal seemed to inspire Hendersonville. The underdogs bit back, forcing the Hornets’ to spend the middle 30 minutes of the match backpedaling more often than attacking.

“That’s the strange part,” Parrish said. “It seemed like a tale of two different games. We came out with a fury, hyped up off the momentum from the CATA game (Thursday’s 3-2 overtime win). In the first 12 minutes we were outstanding. And then, I don’t know if we got complacent or content or were just worn out, but Hendersonville took it to us for a large portion of the middle of the game.”

Salcinovic provided the remedy when he finished a wild, three-shot flurry 11:37 to play. First came a low drive by Flores that was blocked by a defender. The ball pin-balled free to Goodman, who drilled a 15-yard shot off the crossbar. Salcinovic settled the rebound and punched it home from about 20 yards.

Only 8:09 remained when Salisbury salted the match away. This time, Salcinovic took a short pass from freshman Bryan Garcia and rolled a shot into the lower right corner. “Salisbury is ranked No. 1 for a reason,” Sullivant said. “They have maturity. Their guys have been there before. On that play, it showed.”

NOTES: Next up on Salisbury’s dance card is a semifinal match with No. 7 Trinity (20-5-1), a 2-1 fourth-round winner against defending state champion Newton-Conover. Scheduling information is incomplete, but the game likely will be played Tuesday or Wednesday night at Ludwig Stadium. … Salisbury and Trinity played to a 0-0 tie on Aug. 24.

Catawba completes climb to the top with SAC championship

By Mike London mike.london@salisburypost.com SALISBURY — It’s been a season when breaks have fallen Catawba’s way, and Saturday’s 28-14 win... read more