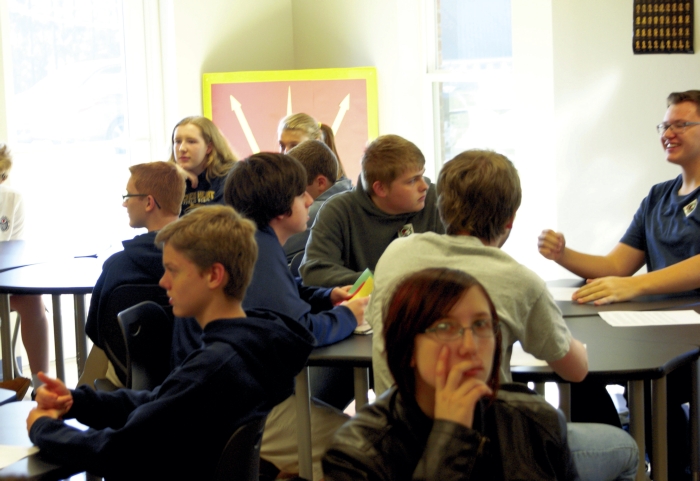 The students toured the school, attended chapel and went to two different classes with North Hills students. The students even had a pizza lunch with the high schoolers.

Maria Lowder, executive director of North Hills, said it was a great opportunity for middle school students to see what high school is like.

“Their families will be making decisions around where their child will go to high school, so we would like for them to choose North Hills to continue their Christian education,” Lowder said.

Lowder said parents may be interested in sending their children to North Hills since the two schools have similar ideologies.

“Their families are, I would think, like-minded about their education because they’re at Sacred Heart,” she said.

“We went to a Bible class and we played games and I learned everybody’s names and I made new friends and it was a lot of fun,” she said.

Marina Mueller, another Sacred Heart student, said she enjoyed the Algebra 2 class she attended and the food they were served.

Caroline Cardlle, a Sacred Heart student, said she liked the new wing of North Hills’ building, as well as the rest of the school’s layout.

“It was fun to walk outside to go to your other classes,” she said.

Constance McGrail, a high school math teacher, said the lesson that day was something that was new to her students, so the playing field was somewhat an even one.

“I told them, ‘You get to do something you’ve never done and (my students are) doing something new,’” she said.

“There was really good interaction, and they participated well and did not seem to be intimidated by the high school students, which was very, very impressive,” she said.

Lowder said it was a great experience for the students and most of them had a good time.

“I think the kids had a lot of fun,” Lowder said. “It’s important for them to know what the experience would be like.”