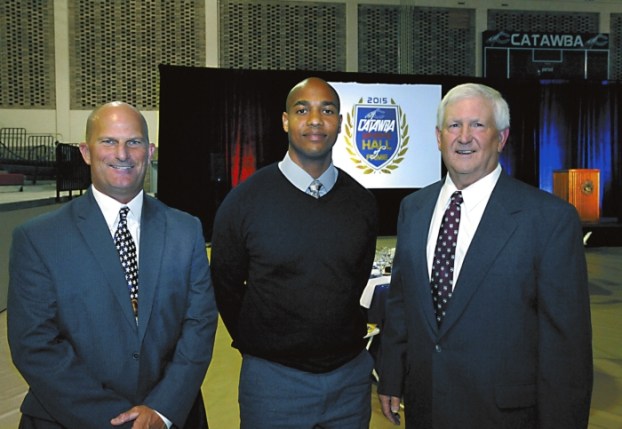 SALISBURY — Catawba College baseball coach Jim Gantt is well known for deflecting attention away from himself and his many achievements but there was no way he could avoid the glare of the spotlight Friday night at Goodman Gymnasium.

Gantt was one of four athletes and coaches to be inducted into the Catawba College Sports Hall of Fame last night and by his own admission, he was humbled and a bit uncomfortable with the singular honor he was about to receive. “I wish they would just mail it to me like they did my diploma,” he said, prior to heading into the banquet. “But it is obviously a great honor.”

About 200 Catawba supporters, Hall of Fame members, administration and staff, turned out for the event in the newly renovated Goodman Gym for the 37th annual induction ceremony that dates back to 1977.

Gantt (class of 1989) was in some elite company as he was inducted along with San Francisco 49ers head coach Jim Tomsula (’90), basketball All-American Art Wade (’98) and two sport star Mike Reynolds (’70). The new class of honorees brings the total number of Hall of Fame members to 179 at the school.

Tomsula, in his first NFL season as head coach for the 49ers was unable to attend the ceremony, but gave a sincere acceptance message by video. It was obvious that Catawba will always have a special place in his heart. “Catawba was not just a place to me,” he said. “It was all of the many great people I encountered there. They cared more about you than you cared about yourself, just like a family.”

He played two seasons at Catawba as a defensive lineman and was part of the Indians’ 1988 South Atlantic Conference championship team. He returned to his alma mater as an assistant football coach under David Bennett in 1996 and was part of four SAC titles and four NCAA playoff berths. From there, Tomsula began coaching in the NFL Europe league before joining the 49ers in 2007 as a defensive line coach. He was named head coach this past January.

“I wish everyone at Catawba continued success and say thank you to all the people who have been such an inspiration in my life.” Tomsula said in his video acceptance.

Reynolds, a native of Williamston, N.J., was a standout catcher in baseball from 1967 to 1970, then was drafted in the 26th round by the Chicago White Sox where he was a three-time minor league all-star, advancing as high as AA. In football, Reynolds was a defensive back and wide receiver for the Indians, earning NAIA All-District honors twice. “Words can’t describe what this means to me,” Reynolds said in his acceptance. “I was fortunate to play with a bunch of great guys in both sports and without them, I would not be here.”

Reynolds also paid a touching tribute to his “hero” John Scott, a teammate at both Williamston High and at Catawba, who passed away earlier this year. He was also surprised when his four adult children — Dan, Elizabeth, Brad and Rebecca — made an unexpected appearance at the banquet, joining his wife Mary Ann.

Wade, a Virginia native, was a three-year starter at guard in basketball for the Indians, scoring 1,492 career points. In his senior season in 1998, he averaged 16.5 points per game in leading Catawba to its first NCAA DII post-season berth.

Wade was named SAC player of the year and an All-American his senior year. Now a coach and athletic director, Wade recalled coming to campus with a huge chip on his shoulder, thinking he was better than everyone. “I was soon very humbled,” he recalled “and learned quickly how much hard work and dedication it takes to be successful. I was humbled again by this honor tonight and will cherish it for the rest of my life.”

The loudest and most enthusiastic response of the evening was reserved for Gantt, the remarkably successful head coach of the Catawba baseball program since 1997. In 19 seasons and 683 wins, his teams have produced eight conference titles, six league tournament titles and nine NCAA Regional berths.

Twice in the last four seasons, the Indians advanced to the NCAA Division II World Series, including a national runner-up finish last May. Gantt is also equally successful as the coach of the Rowan County American Legion baseball team, including a pair of World Series appearances and the state championship this past season. He was inducted into the American Legion Hall of Fame earlier this year.

“It is an extreme honor and flattering” Gantt said of his Catawba induction. “But this is a players’ award. Without the players, none of this would be possible.”

He began by recognizing all of his family members present, including his wife, Adrian, and daughter Blakeley. He then gave a special welcome to all of his current and former players and coaches present.

A native of Newton, Gantt came to Catawba in 1985 and enjoyed a 105-game career as a third baseman in four seasons.  In 1988, he earned all-conference honors, batting .322 and driving in 12 runs as the Indians won their first league championship in 24 years.

But Gantt has clearly excelled as an assistant coach and head coach at Catawba, not only crediting a succession of great players, but also the inspirational influence of former head coaches Jim DeHart and Dick Williams, now both deceased. Still, it is the teams he has coached and the players he has developed that define his philosophy of baseball at the college.

“Our program is built on being humble,” he said, “and being respectful of our school and the name on our jerseys. Through baseball, our players learn life lessons that make them better husbands, better employees and better people. Catawba gave that to us.”

Catawba President Brien Lewis, welcomed the gathering “…to the campus of champions,” noting the recent success of the softball, baseball and current football team that closes out their regular season against rival Lenoir-Rhyne today at 1:30 pm. He indicated before the banquet that the school may hold future Hall of Fame inductions every other year on the eve of the final home football game.