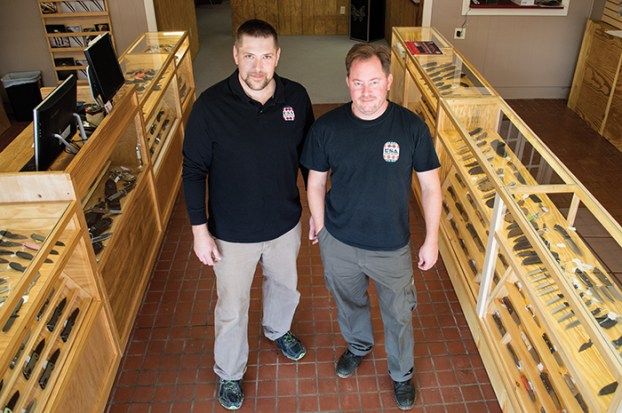 Josh Bergeron / Salisbury Post - Business partners Scott Whittington (left) and Kevin O'Mellan (right) are in the midst of moving their company USA Made Blades into a storefront on North Main Street in downtown Salisbury. The business will have a grand opening on Saturday. Josh Bergeron / Salisbury Post – Scott Whittington, who runs USA Made Blade with his business partner Kevin O’Mellan, sharpens his knife Thursday at the company’s new storefront on North Main Street in Salisbury. USA Made Blade will have a grand opening for its new business on Saturday.

Scott Whittington focused on quality when deciding the singular principle for business.

USA Made Blade, run by Whittington and his business partner Kevin O’Mellan, exclusively sells knives made in America. He said other countries make well-crafted knives, but American ones are routinely the highest quality.

“You wake up in the morning and your pants are made in Vietnam, your shirt is made in China, your hat is made in Korea, your watch is made in Japan and your phone is made in who knows where,” he said. “There’s the occasional piece of clothing you put on yourself that’s made in America, but the last thing I put in my pocket before I leave to head out the door is my pocketknife, and I want it made in the U.S., dammit.”

Whittington’s focus on the quality of American knives is the reason he started the business.

“The short story is I got tired of everything being made overseas,” Whittington said. “There was this knife I bought that I got excited about. I’ll leave the company name out of it, but they typically make all their knives in the U.S. So, when I get it in the mail and open it up, it was made in China. I lost my mind, and that’s honestly how this all came about.”

Initially, USA Made Blade was a business based in Whittington’s basement. For about three years, USA Made Blade only used social media and websites to push its products. Last year, they opened a retail location at 134 N. Lee St. In part, the move to a concrete location was also necessary to purchase certain kinds of knives. Some knife-makers won’t ship to sellers who don’t operate a retail location, Whittington said.

Now, USA Made Blade has moved to one of Salisbury’s busiest roads — Main Street. The store will have a grand opening for its new location — at 320 N. Main St. — on Saturday starting at noon. A number of well-known knife-makers are scheduled to attend, including LT. Wright, Andy Roy, Allen Surls, Dylan Fletcher and Todd Hunt.

The store’s hours are noon to 6 p.m. Tuesday through Friday and noon until 5 p.m. on Saturday.

Though many people may own a pocket knife, Whittington said it’s a tool worth carrying around every day.

“It’s amazing how many times you’ll use a knife in a day if you carry one every day,” he said. “I probably use my knife for a simple, practical purpose 20 times per day.”

By Susan Shinn For The Salisbury Post Terry Holt, Rowan Museum’s board president, has a simple invitation for local residents... read more