Seniors at Rufty-Holmes taking technology by the horns 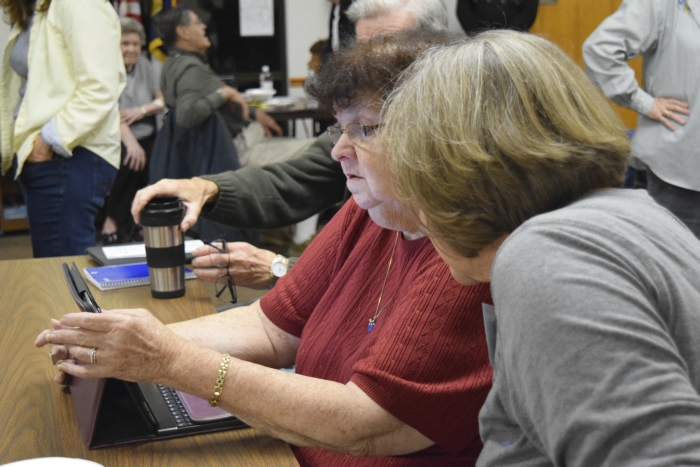 Judi Honbarger, right, walks Mary Coffey through clearing out space on her tablet.

Seniors at Rufty-Holmes Senior Center are keeping abreast with the Information Age. Throwing off stereotypes, these tech-savvy seniors hold a computer club every Thursday morning to keep up to date on the latest gadgets and gizmos.

The club started in the late 1990s after the office at the senior center started using PCs. Executive Director Rick Eldridge said that seniors would stop by and ask the staff to teach them how to use a computer to ask for help untangling a digital problem.

At around the same time, Pat Nelson retired and joined Rufty-Holmes. She’d used a typewriter for years at her office job, and felt there was a void to be filled.

Always the eager learner, Nelson started taking classes at Rowan-Cabarrus Community College. She learned how to use a computer and noticed that other retirees at Rufty-Holmes wanted to learn the skill, as well.

Encouraged by Eldridge, Nelson, Eleanor Qadirah, and a few others got together and started a group to share knowledge and foster growth and learning. Eldridge said that the center used donated PCs to build a computer lab and began partnering with RCCC to hold computer classes once a week. For a while, Nelson taught classes and Qadirah served as club president and helped organize speakers and design curriculum.

It was a move that served several purposes. Eldridge said that many of the seniors benefited from the smaller classes and more individualized teaching style. Nelson, Qadirah said that one of the main goals of the club was to encourage seniors to be active and to keep learning. Qadirah says that older folks have seen a lot of changes in their lives, and the growing inescapability of computers is just one more.

“We’re dealing with it,” she said, “It’s just one more thing we’ve got to learn to deal with. It’s ever-changing.”

And the tech has lots of applications for seniors. Qadirah says she has an app on her phone that helps her remember when to take her prescriptions.

Currently, the club has 22 regular members, Qadirah says. But it’s had as many as 75 — with ages ranging from recent retirees in their 50s and 60s to members pushing 100. The club hasn’t missed a week since its inception, and brings in teachers from Catawba, RCCC and community IT companies.

Now, all of the regular members know computer basics, Nelson said, and are bringing in new problems to puzzle over. They bring tablet computers and smartphones and questions about operating systems. They’ve also figured out ways to apply technology to hobbies.

Inside the Hurley Room at Rufty-Holmes, members who have become proficient set up stations to teach others. They show them how to use digital photography and photo editing software to touch up and restore old photographs, or give lessons in computerized gaming or show others how to digitally create embroidery patterns.

In a corner, Ralph Shuping stands waiting to walk club members through genealogy projects using online resources. Shuping has done a lot of research on his family, and while he enjoys leafing through files at libraries, he’s got to admit that using an online database makes things a little easier.

“There’s a lot of tools available,” he said.

While members are free to use digital technology to pursue their passions, there are a few newcomers who still need some instruction. That’s why there’s usually a younger tech expert from the community there to walk newbies through fraud prevention, dealing with viruses and malware, and protecting their information.

Phil and Mary Coffey may have just moved to Salisbury, but they were ready to jump into the computer club. They just joined the senior center, and Mary thought the club sounded like a good place to ask questions. At home, Mary says, she uses a tablet computer.

“I think it’s great,” she said, “It opens up more windows to the world.”

Her husband, Phil, says he became interested in technology when they signed up for Medicare. As their consultant walked them through plans and options, Phil says he was able to go on the computer and figure out a plan that saved them more than $1,000 in prescriptions.

“It’s also great getting out and meeting people,” he said.

Rufty-Holmes offers more than 30 clubs and classes, Eldridge says. Most of them were started because members are interested in things. The computer club meets every Thursday morning from 10 a.m. at Rufty-Holmes Senior Center, 1120 S. Martin Luther King Jr. Ave.