Not the Mizzou she knew 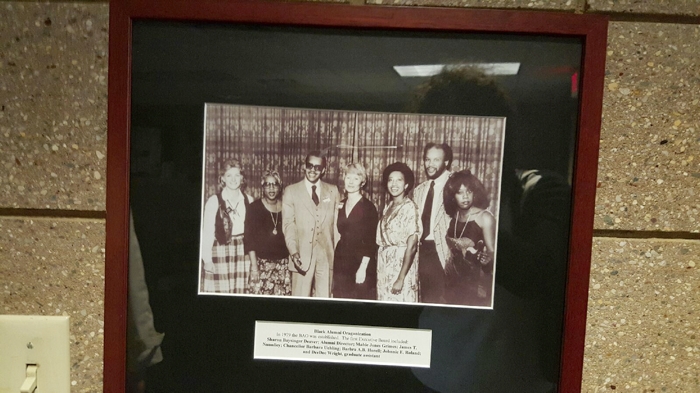 Photo hanging in the Black Cultural Center at the University of Missouri includes DeeDee Wright, now of Salisbury, on the far right. Submitted photo

DeeDee Wright has been an eyewitness to civil rights history.

She was arrested along with a young Jesse Jackson in Greenville, S.C., after a library sit-in in 1960. She worked on Julian Bond’s 1986 congressional campaign.

She has called herself a “civil rights baby,” one who grew up in the movement.

But this week Wright has been remembering a calmer period of her life, 1978-81, spent in a place where racial controversy has erupted in recent weeks — the University of Missouri.

That’s not the way Mizzou was back then, Wright said this week. “I thought we had grown. … I thought the University of Missouri was making great strides in 1979.”

Wright said she was one of 225 blacks in a student body of 26,000, but she did not experience the racial epithets and threats that students say plague the campus today.

“I had a good career at the University of Missouri,” Wright said. “Everybody knew you.”

Born in South Carolina, Wright grew up in New York, earned her undergraduate degree at Clark College in Atlanta and then headed to Missouri to get a master’s degree.

Wright helped organize an alumni group for black students at the request of Chancellor Barbara Uehling, she said. The chancellor was concerned about the difficulty of getting black graduates to participate in the Mizzou Alumni Association.

Recently, a sorority sister from that time texted Wright a photo from Columbia, Mo., with this message: “Look what is hanging in the BCC.”

The framed photo in the university’s Black Cultural Center shows the first executive board of the Black Alumni Organization. It includes Uehling, who is in the center of the seven people, with graduate assistant DeeDee Wright on the far right.

Eventually, Wright’s work in counseling and social work brought her to Salisbury, where she became good friends with Elizabeth Duncan Koontz — the first black woman to head the National Association of Educators and eventually part of Richard Nixon’s administration.

U.S. society has taken a downward turn since her college days, Wright said. The atmosphere throughout the country is such that “people say things on TV they would never say to you,” she said.

But history often repeats itself. This week the Mizzou Alumni Association announced that it will form a Black Alumni Network.

The decision to start — or re-start — a black alumni group came in the wake of the UM system president and chancellor announcing their resignations after they were criticized for their handling of racial tensions on campus.