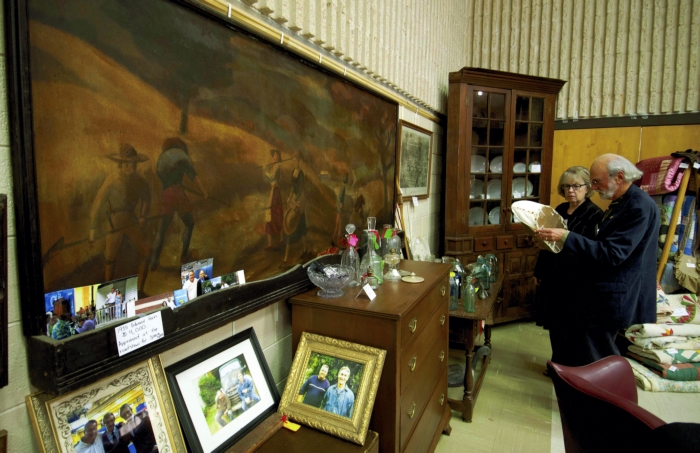 A huge 1935 Edward Fern painting valued on Antiques Roadshow between $3,000 and 5,000 is on display in the Anthony’s Antiques booth. The annual Salisbury Antiques show and Sale kicked off Thursday evening with a reception and meal for the sponsors. Jon C. Lakey/Salisbury Post

Terry Holt, Rowan Museum’s board president, has a simple invitation for local residents for this weekend’s 62nd Annual Antiques Show and Sale: “Come see it all!”

“There’s a little bit of everything for everybody,” Holt said Thursday night during the Patron’s Party. “We have some new folks this year, along with our veteran vendors. It’s a good mix. It really is.”

Rowan County pieces are always a draw, Holt said, and you’ll find that from several vendors this year. The show has some 15 vendors from Rowan County and beyond. The event continues today and tomorrow at the Civic Center. Hours are 10 a.m. to 7 p.m. today and 10 a.m. to 5 p.m. Saturday. A delicious lunch — featuring the show’s famous chicken salad and vegetable soup — is available both days. Tickets are $6 at the door.

As she has for the past 48 years, Barbara Lockert heads up the wait staff.

“If you didn’t have volunteers, you wouldn’t have anything,” she said. “I’ve enjoyed it.”

Davis Cooke, owner of Old Sarum Gallery, is in his 10th year as a vendor.

“It’s a success,” he said, “and I want to support the museum and the show.”

Shows of this format, he says, are now few and far between. “This show is running against the trend. It’s a more elegant affair, and it’s a huge testimony to Kaye.”

He was, of course, referring to Kaye Brown Hirst, the museum’s executive director, who took over the show last year after longtime leaders realized it was time to pass the baton.

That included Trudy Thompson, who for years worked with vendors. She and husband Tommy were in attendance Thursday night.

“This is definitely more relaxing,” she said during dinner, “and I’m so proud of the museum.”

Her husband was in complete agreement, on both counts.

Mimi Carlton and Alice Stanback admired the pieces at D.R. Grissom, a jeweler offering estate jewelry from the 1940s to the 1970s. A 1950 Cartier platinum bracelet with 7 carats worth of diamonds was a standout piece.

“It is stunning,” he said of the ring. “This was made to make a statement.”

Grissom has found a niche is offering vintage, one-of-a-kind jewelry.

“The name brand doesn’t hurt,” he said, “but let the piece itself inspire you first.”

For local attorney John Basinger, the artfully arranged booths were almost too much to take in.

“I’m just here to support my family and the museum,” he said.

Bob Setzer had already made a purchase from Franchot Palmer.

“The thing on the easel?” he said. “Get Franchot to tell you.”

That “thing,” Palmer said, was an 1877 fox hunt print by Arthur Ackermann — “a big name in printing.” But the bigger story may have been the framing, done by famed framer Paul Victorius.

“Lord have mercy,” Palmer thought when he discovered Victorius’ seal on the back. “It’s gotta be real.”

Attorney Mona Lisa Wallace was beside herself with the purchase of an original bound manuscript of “Lion’s Share,” the story of Food Lion. It came from the estate of Mickey Aull, owner of Aull Printing. It was signed by authors Jason Lesley and Mark Wineka, as well as the original founders of Food Town, later Food Lion: Ralph Ketner, the late Brown Ketner, and the late Wilson Smith.

Wallace negotiated a price of $100 from the asking price of $150. She planned to give the manuscript to Ralph Ketner’s family.

“This will be very valuable some day,” Wineka had written on the manuscript’s inside cover. “We can only hope, that is.”

The 62nd Annual Antiques Show and Sale — the oldest of its kind in North Carolina — serves as a fundraiser for the museum’s three sites: Rowan Museum, 202 N. Main St.; Utzman-Chambers House, 116 S. Jackson St., and the Old Stone House in Granite Quarry.