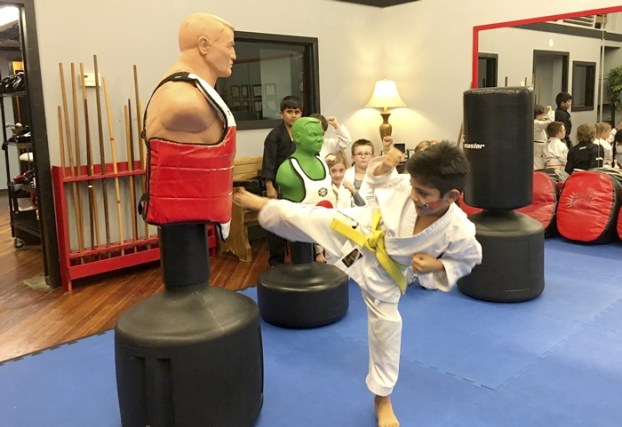 Submitted photo Rafael Caballero, a student of SideKick Karate, demonstrates his skills. A Ninja Survival Course will be held Nov. 21.

The Ninja Survival Course is an obstacle course designed to give the younger kids a fun way to improve their survival skills. It is based on training methods of the ancient Japanese art of ninjutsu, which means, the art of stealth.

It is not just a fitness course of strength and agility like the popular NBC series called “American Ninja Warrior,” but the course also incorporates actual combative drills using basic ninja skills of escaping, kicking, striking and ancient weaponry. And the course includes breaking real boards.

There is a start and finish line with 12-15 stations depending on age division. Boys and girls can participate at 5-12 years of age. Score is based on execution of technique by judges and amount of time it takes to complete the course. No martial arts experience is necessary to compete in the event, says Ricky Smith, owner and head instructor of SideKick Karate of Salisbury.

“The goal of the Ninja Survival Course is to introduce younger kids to the way of martial arts,” says Smith. “Kids this age can definitely learn to defend themselves. Martial arts have a way of building a child’s confidence; therefore, they learn to overcome their fears. It provides a structure of discipline and respect, giving the child a huge advantage of succeeding in life.”

Some of the stations in the obstacle course include crawling under and jumping over obstacles, striking and kicking dummies, walking the plank for balance, hopping and running for agility, striking multiple targets with a wooden sword, throwing rubber ninja stars, and breaking boards for focus and technique.

The survival course is designed by Smith and his twin brother, Randy. “This gives kids a chance to have fun and practice basic survival techniques in a safe and competitive environment, especially since we are living in an increasingly dangerous world with survival and preparation becoming more mainstream,” says Randy Smith.

“What made ninjas such legendary warriors was the fact that they began their training around 5 years old; so it makes sense to start training our children in survival skills early in life so they can protect themselves against a bully or an attacker,” Ricky Smith said.

The competition will begin at 10 a.m. There is no experience necessary for the Ninja Survival Course. There will be a practice run with coaching from 6 p.m. to 7 p.m. on Friday, Nov. 20, at the tournament location. The entry fee is $20. Entry forms are at SideKick Karate of Salisbury, 119 W. Innes St., or call Edie Smith at 704-216-2258 for more information.