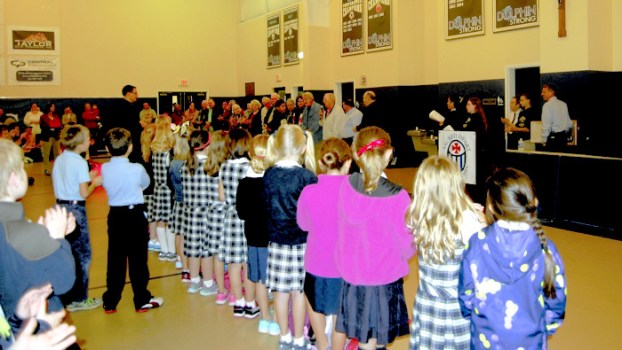 Family members and friends who are currently serving or had previously served in the military were invited to attend.

Sacred Heart was open for school on Wednesday and parents, teachers, staff and students gathered for the morning assembly.

The school has been holding the breakfast and assembly for seven years, and also honored veterans at their old facility.

“We are proud that you are with us and we are grateful to you for your service to our nation and for the sacrifices that you have made on our behalf,” she said to the veterans.

The veterans stood in front of the gym and introduced themselves one by one.

Ed Sullivan, a veteran naval aviator, was the speaker for the event. Sullivan served in the Navy from 1982 to 1995 and became a naval aviator after completing the naval academy and flight school.

Sullivan said when he was 5 years old, he told his mother he wanted to fly planes. He said there were many people around him who helped him achieve his dream.

Sullivan told the students that it was important to ask Jesus for help with the things they wanted to achieve, from washing the dishes to becoming a doctor.

“God is always wanting the absolute best for your life,” he said.

Sullivan told the students to ask parents and teachers for help, as well as working with their friends to help each other achieve great things.

“Whatever it is that you’re believing in your heart right now that you think you want to be one day, you probably will do it,” he said.

Robin Fisher, marketing and communications director, said the assembly was important for the students to attend.

“It puts an importance on Veterans Day,” she said.

After the assembly, the students went to class and the veterans ate a breakfast provided by the school.

Lopez said the event lets the veterans know how thankful the students are for their service.

“I think it’s important because the veterans helped serve our country and helped to keep our country safe from all the bad things that have happened,” she said.

Principal Frank Cardelle told the students that honoring veterans is not just for Veterans Day.