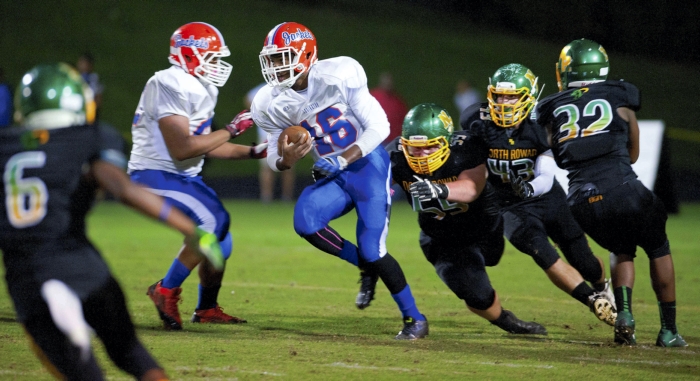 JON C. LAKEY / SALISBURY POST... Lexington quarterback Daniel Reid-Bennett (16) tries to get away from North Rowan’s Steven Thurston (55) and Jake Pritchard (43), during a game on Oct. 8. Thurston, Pritchard, Matthew Hoosier and Javin Goodine will lead North into a state playoff game at Winston-Salem Carver on Friday.

SPENCER — North Rowan nose guard Steven Thurston, tackle Matthew Hoosier and middle linebacker Javin Goodine combined to form a 680-pound roadblock that limited Salisbury’s offense in Friday’s hard-earned, 21-13 CCC victory.
“Those guys make a pretty tough triangle in the interior of our defense,” North coach Ben Hampton said. “They stop the run.”
Salisbury managed 115 rushing yards, netting under 3 yards per carry. Antwond Glenn broke several nice runs, but the Hornets gave some yards back with sacks, including 2.5 sacks by the relentless Thurston.
While North has allowed 125 rushing yards per game for the season, that stat is somewhat misleading. Statesville gashed the Cavaliers for 376 yards on the ground. Throw that game out, and the Cavaliers are allowing right at 100 rushing yards per game.
It’s also worth mentioning that North (5-6) took on five 3A and 4A teams that qualified for the state playoffs, so the Cavaliers’ stingy defensive numbers were built against some legit teams.
Despite missing two games, Goodine is North’s leading tackler with 83. Thirteen of those stops, including 10 primary hits, came on Friday.
“I don’t know that I did anything special,” Goodine said. “It was a good team effort, with all of us equal, really. Our defensive linemen did their jobs like they always do. That frees the linebackers to make tackles.”
Goodine (5-foot-10, 205 pounds) is the son of Catawba Hall of Famer Rodney Goodine, who was in on 392 tackles for the Indians in the late 1980s.
“Javin is his dad’s son,” North defensive coordinator Steven Williams said with a smile. “He’s just that typical middle linebacker. He makes tackles.”
Goodine said there’s always been a certain level of expectations for him because people remember what kind of player his father was.
“I remember in fourth grade when I decided not to play that year,” Goodine said. “Everybody reminded me I was a Goodine and I needed to be playing.”
Goodine was a good player as a sophomore last season, but he’s made strides as a junior.
“He just about killed himself in the weight room in the offseason,” Hampton said. “He always does that extra work and that’s given him a physical edge that’s proving out on the field.”
That’s the same path followed by Thurston (5-11, 255), who has transformed himself from a chunky, spunky kid to a really strong, stocky kid.
“He’s become a poor man’s J.J. Watt,” Williams said. “He can do everything you ask of him and more. He changed his body with workouts over the summer. He worked out twice some days and he lost 15 pounds.”
Thurston has 5.5 sacks, 64 tackles and 26 tackles for loss.
“He’s been an anchor on our defense, holding up two blockers and giving our linebackers a chance to get downhill,” Hampton said. “He’s become one of our strongest, most physical kids and he has a motor that doesn’t stop.”
Thurston, also a junior, is almost always double-teamed, so he doesn’t get many sack opportunities, but he made things happen for North on Friday.
Salisbury ran 16 plays that lost yardage, and Thurston often was at the bottom of the pile. Salisbury QBs Marcus Corry and D.J. Alexander were tackled in the backfield eight times.
“We got them in some third-and-long situations where we knew they were going to have to throw, and that’s when I have a chance to get sacks,” Thurston said. “I was able to split double-teams a few times and put pressure on the quarterback. But D.J. is big and he’s got some wheels on him for a guy that size. He’s the Cam Newton of high school quarterbacks.”
While the Cavaliers expected Goodine and Thurston to be good, Hoosier, only a sophomore, has surprised everyone, including his coaches and teammates.
He thought his sport was basketball until recently, but his body type (6-0, 220) probably makes football a better fit.
“I came out for the first two or three days of football conditioning, but then I didn’t go back,” said Hoosier, who didn’t play football at all as a freshman. “My brother (junior receiver Dakerius Hoosier) told me that I was doing pretty good and I shouldn’t quit. Then my dad sat me down and told me I would probably do better in football than basketball.”
Hoosier became a starter at the 3-technique tackle spot when Terry Cathcart was injured, and the rest may be history. He had nine tackles against Salisbury and was in on two sacks.
“The field was slippery,” Hoosier said. “But the coaches taught us how to put all our weight on our legs, so I wasn’t sliding around too much.”
Hoosier destroyed a couple of Hornet running plays by getting to the quarterback just as he was handing the ball off. He and Thurston met at the quarterback for a shared sack once, and Hoosier was scary throwing around Hornets on kickoff returns.
Against West Davidson recently, there was a kickoff return on which Hoosier flattened a blocker, stared him down briefly, and then pancaked the ballcarrier for good measure.
“Hoosier can be a monster, and his ceiling is practically limitless if he gets in the weight room,” Hampton said. “He’s hitting people in the mouth on running plays and he’s knocking them down on kickoff returns.”
Hoosier admitted that football is starting to be at least as much fun and basketball, and there’s no doubt he’s going to keep getting bigger.
“His nickname is ‘Feet,’ and he answers to it,” Williams said. “He’s got size 16 feet.”
North is young, but the Cavaliers made the playoffs (they’re at Winston-Salem Carver on Friday), and the future is bright.
“The best thing about Goodine, Thurston and Hoosier is they’re all coming back,” Williams said.