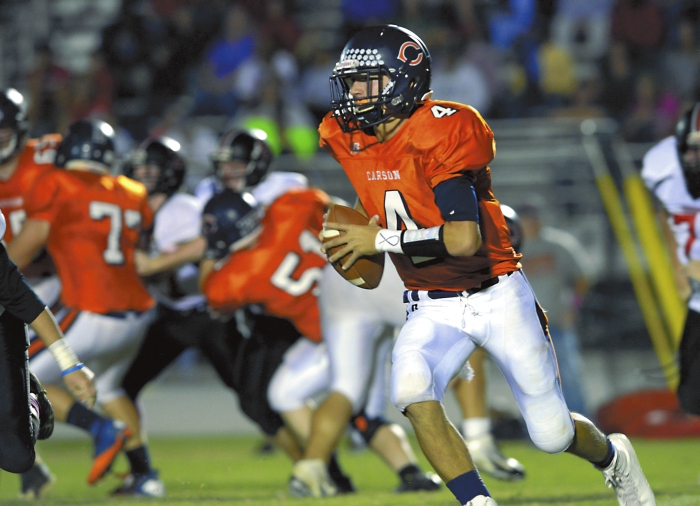 Wayne Hinshaw/for the Salisbury Post ... Carson quarterback Owen White (4) rolls out and looks for a receiver during a game against South Rowan on Oct. 9. White will lead the Cougars’ offense into the state playoffs on Friday at West Rowan.

CHINA GROVE — The old proverb says a leopard can’t change its spots — that no one can ever change his own nature.
But Carson has thrown the football for 573 yards the past three weeks, and it wasn’t in situations where the Cougars (7-4) were behind and had to go to the air in desperation to try to catch up. They won all three of those games, including a surprising upset of Hickory Ridge.
Find a dictionary and look up “triple-option offense” and Carson coach Joe Pinyan’s picture probably is in there. Pinyan is the ultimate wishbone, run-run-run coach, but it appears the old dog has learned a new trick in his 13th season as head coach.
Pinyan is enjoying crossing up everyone’s scouting report and he seems to get a kick out of answering questions about Carson’s sudden transformation from ground-and-pound to throw-it-around. Carson has passed 55 times in the last three weeks, mind-boggling for a Pinyan-coached team. To put that in perspective, the Cougars threw 26 times the first three weeks this season.
“We play in a dang tough league and maybe we’d become too predictable on offense,” Pinyan said. “We’ve got the right combination to pass. We’ve got a quarterback who can throw it and we’ve got receivers and backs who can catch it. We’ve got an explosive receiver (Brandon Huneycutt) who is one of the best players in our league.”
Pinyan is in his third season at Carson. His 10 seasons at Salisbury High produced 100 victories, seven conference championships, one state title and the only two quarterbacks in Rowan County history to rush for 1,000 yards in a single season — John Knox in 2010 and Brian Bauk in 2012.
Pinyan’s current quarterback, sophomore Owen White, isn’t as quick as Knox or as swift as Bauk, but there’s a cannon attached to White’s right shoulder.
You take advantage of the assets you have. Pinyan’s trust in White’s head and arm has grown each week.
“He’s had some really solid games and he’s a very mature sophomore,” Pinyan explained. “As far as football savvy, he’s got it. He understands an awful lot for his age and he soaks in everything you tell him. He makes mistakes, but he doesn’t repeat them. He made a pre-snap read in Friday’s game (a 41-14 win against Cox Mill) where he saw the middle of the field was open, but then they rotated a guy over from the backside to cover the post. He didn’t see him, and he threw a pick. But he learned from it.”
Carson started its passing spree in the second half of a victory at Northwest Cabarrus, continued it against Hickory Ridge on Senior Night. The Cougars kept throwing Friday at Cox Mill.
“We got Hickory Ridge out of sequence,” Pinyan said. “We were throwing it when they expected us to run, and we were running it when they expected us to pass. Then we had to throw it a lot to beat Cox Mill. It was a sloppy field and our running backs aren’t heavy. It was going to be a tough conditions to try to grind it out.”
White threw four TD passes at Cox Mill — all to Huneycutt.
“Huneycutt makes unbelievable catches,” White said. “Nothing he does is shocking. If I can throw it up there, he’ll go get it. We had to sweet-talk Coach a little bit, but now he has a lot of faith in us and we enjoy throwing the ball. It evens out our offense some and we’ve been producing.”
On Friday, White became the second Carson quarterback to throw four touchdown passes in a game. Austin McNeill accomplished the feat against Hickory Ridge in 2012.
For the season, White is completing 54 percent of his passes for 1,172 yards. He has 12 touchdown passes and has thrown only five interceptions.
“Huneycutt made great catches Friday, but Owen also made great throws,” Pinyan said. “He hit him with a long one down the sideline. Huneycutt never had to break stride.”
The son of softball legends Tim White and Casey Lanning White, Owen was a freshman phenom for Carson’s varsity baseball team last spring as a pitcher/shortstop and was a serious candidate for SPC Player of the Year and Rowan County Player of the Year.
White throws 90 mph fastballs and he’s 6-foot-1 and still growing, so his future is probably baseball.
But he’s also a throwback to great athletes of previous generations. He wants to play everything, and whenever football season ends for the Cougars, he’ll be on the basketball floor.
“I love all the games, just love competing as hard as I can with the guys in every sport,” White said.
He competes so hard that he worries Pinyan sometimes.
“He’ll run the option and we’ll all be yelling for him to go down, but he’s out there fighting for that extra yard,” Pinyan said.
White sustained a concussion in Carson’s 28-6 loss to Robinson and sat out the following week when the Cougars lost at home to West Rowan, 28-7.
The NCHSAA’s 3A playoff bracket has provided a first-round Carson vs. West Rowan rematch in Mount Ulla on Friday, so White will get a chance to see what he can do against the Falcons.
“It’s another chance for the whole team, and everyone is excited,” White said. “I’ve got great friends on West’s team, but I guess we won’t be friends Friday — at least not until after the game.”