More than 600 Scouts to camp out at Transportation Museum 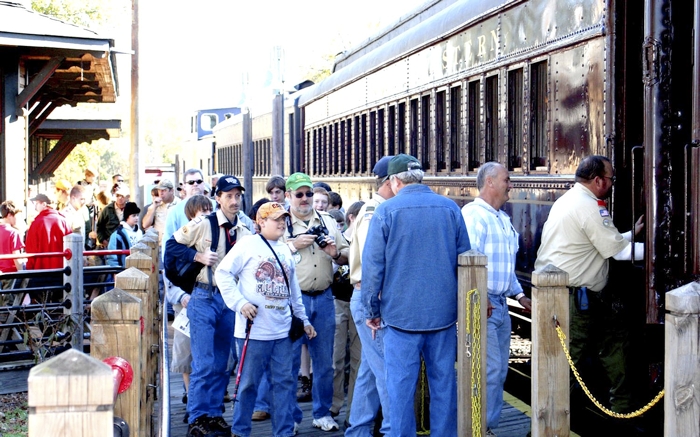 Submitted photo During the 2014 Boy Scout Rail Camp, boys and adult leaders get on the train for a ride around the N.C. Transportation Museum.

SPENCER – The N.C. Transportation Museum will host its largest ever Boy Scout Rail Camp this weekend. Approximately 650 scouts and troop leaders have committed to the 2015 event, with troops traveling from across North Carolina, South Carolina and Virginia.

Troops will gather for a weekend of train rides, exploration, learning and fun, camping out on the museum grounds Friday, Nov. 13 through Sunday, Nov. 15.

The 2015 Boy Scout Rail Camp will be led by Lucas Safrit, an Eagle Scout and recipient of the 2015 Christopher C. Crittenden Internship from the N.C. Department of Cultural Natural and Cultural Resources’ Office of Archives and History.

Safrit has experienced Rail Camp as a Scout, attending in 2006 and 2007, as a museum volunteer since that time, and will be in charge of this year’s event.

“Rail Camp provides Scouts with an appreciation of railroading, it teaches them to be safe around railroading equipment, and they have a lot of fun in the process,” he said.

Scouts will set up camp at the museum Friday evening. Saturday morning, troops will tour the museum before taking a train ride around the museum’s 57-acre property. After a scavenger hunt, Scouts will dedicate the afternoon to earning their Railroading Merit Badge. They will learn how a diesel-electric locomotive develops power, how to identify different types of railcars, the importance of railroad signals and railroad safety.

A new event being added this year is the Railroad Handcar Time Trials. Two Scouts and an adult from each troop will be chosen to compete. With Safrit also on board, team members will pump the handcar as fast as they can from the silver Southern Railway water tanks on the north end of the property to the Flue Shop on the south end of the property. The fastest team wins a special prize.

This represents the second consecutive year that Boy Scout Rail Camp has drawn more than 600 Scouts. Its success may lead to a second campout weekend for Boy Scouts, possibly in the spring of 2016, or splitting the fall event into two separate weekends.

Boy Scout troop leaders wishing to be a part of future events may be added to the event contact list by emailing nctrans@nctrans.org.