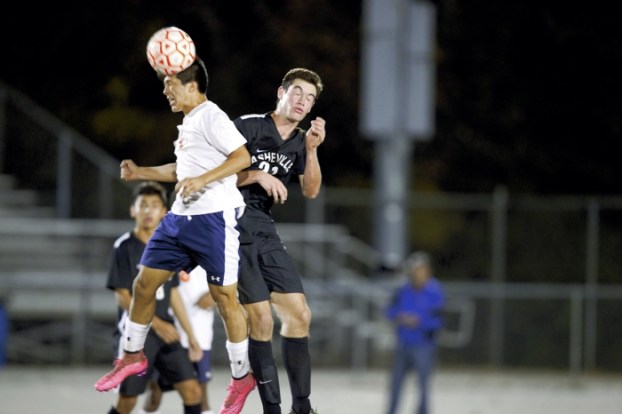 CHINA GROVE — There couldn’t be a more sudden death than the one Carson’s boys soccer team experienced Thursday night.

With a chance to make program history, the third-seeded Cougars allowed a season-ending goal with 2.4 seconds left in regulation and fell, 3-2, to visiting Asheville.

“That’s as tough as it gets,” first-year coach Ryan Winchip said after Carson (20-2) coughed up a 2-0 halftime lead and suffered a third-round loss. “That’s a heartbreaker. I wouldn’t wish it upon anyone. These boys deserved better. It just didn’t happen for them.”

Instead, it happened for No. 6 Asheville (19-3-2) and its all-state midfielder Will Jones — who scored all three goals, including two in the final 5:27.

“After the second goal, some of the guys said they didn’t want to play for a tie. They wanted to play for the win,” said Jones, who beat Carson keeper Grayson Owens on a breakout play as the clock ticked down. “I was surrounded by their backs, but somehow the ball ended up on my foot and I just knocked it past (Owens). A buzzer-beater, that’s always pretty exciting.”

Carson players were stunned by the drastic change-of-fortune. Leading scorer Brandon Flores, one of nine seniors who played their final high school match, tried to stretch a smile across his broken heart. “It was right there for us,” he said. “It’s just not the way we wanted it to end.”

Teammate Ricky Maldonado, who scored in the eighth and 19th minutes to give Carson a two-goal edge, seemed frozen by disappointment. “In the first half, that’s how we imagined it would be,” he said. “That was our plan, to have a dream start.”

Indeed, but even Gladys Knight and the Pips know dreams don’t always come true. And this one began to unravel early in the second half when Jones approached from the right side and scored off a pop-up in front of the cage.

“I was the front post-runner,” he explained. “I just beat the keeper to the near post.”

For the next half-hour the match transformed into and old-fashioned street fight, with two dogs scrapping over one bone. There were yellow cards, hard fouls, aggressive plays and even an Asheville goal nullified by an offsides call with 6:12 to play.

“Nobody cracked mentally,” said winning coach Mike Flowe. “They never cracked and we never cracked. Nobody quit. You know what it was? We believed in ourselves.”

Just when Carson’s season began feeling like the equivalent of a best-seller, Jones netted the tying goal less than a minute later. There was heavy congestion in front of the Carson cage when he charged forward and slipped a shot past Owens. “I took it off my thigh,” he said with a 150-watt smile. “It just squeaked through everyone.”

Carson spent the remaining minutes trying to penetrate Asheville’s midfield and defensive wall, finishing with nine shots in each half. But backup keeper Luca Cordovez, who spelled injured starter Evan Delucca late in the opening half, was master of his domain.

“We left it on the field,” said Flores. “They just had that little bit more of energy that we didn’t bring in the second half.”

Asheville’s final spark came with the clock winding down and Carson — perhaps anticipating overtime — on the defensive. Jones seized the moment and collected the game-winner, leaving Carson players capsized in a sea of reality. Several fell to their knees, others were inconsolable.

“Before the game I told them this is a chance to do something special,” Winchip said. “Early on we capitalized on opportunities. Down the stretch we couldn’t finish.”

Instead, a season that included a pair of 10-game winning streaks and two playoff victories is finished, leaving only a chill in the air.

“I lose nine irreplaceable seniors,” Winchip said. “They’re great kids. We’ve had our quarrels, but I love them like sons or brothers. It’s going to be hard to see them go.”

From staff reports The Sam Moir Christmas Classic is set for Dec. 28, 29 and 30 at Catawba’s Goodman Gym.... read more