‘Because of them’: Rowan celebrates, thanks veterans 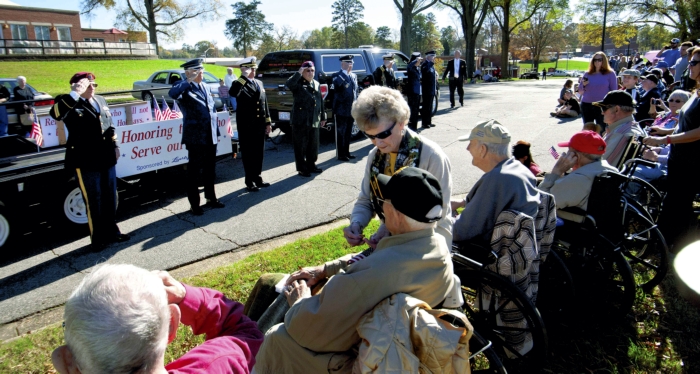 Veterans riding on a trailer sponsored by Lyerly Funeral Home in Wednesday’s Veterans Day parade got off the trailer and jointly saluted a row of veterans in wheelchairs who live at the N.C. State Veterans Home. The annual parade started on the campus of the W.G. (Bill) Hefner VA Medical Center then reformed on South Main Street and marched north through downtown Salisbury. Jon C. Lakey/Salisbury Post

Flags were flying high at the Veterans Day Parade in downtown Salisbury on Wednesday.

Charles Moody is from Salisbury, but says this is the first time he’s ever attended the Veterans Day Parade. Moody comes from a family of Navy veterans–his father and father-in-law served in World War II–and is a Vietnam himself. But for a long time the negativity a lot of veterans received, particularly after the Vietnam War, left a sour taste.

“It’s tough when your country doesn’t want to recognize you,” Moody said.

But over the years, he’s been happy to see that change. His son-in-law is a Navy veteran of Desert Storm, and Moody says he’s been pleased with the support and recognition recent veterans are receiving.

This may be the first year Moody attended the parade, but he says his wife and daughter never miss it.

On the sidelines, Leon Kent, 86, kept a steady salute for the full parade. He says it’s hard to let events like this pass.

Kent served in the Marines in the Korean War, and Leonard says that for her and her mother, Veterans Day is a family day.

“We try to share this event every year,” she said.

After Kent was honorably discharged in 1953, he spent his time working at the Veterans Hospital.

As the parade started up with marching chants from JROTC groups and Boy Scouts and Girl Scouts troops, Shirley VanSlyke sat on the sidewalk with her daughter, Heather Marley, and grandsons Andrew, 2, and Luke, 6.

Normally, she says, she’s working and isn’t able to attend the parade — so this was her first time watching it. Andrew and Luke’s grandfather was a Vietnam War veteran, she said, as was her brother.

VanSlyke says it’s thanks to veterans that she’s able to enjoy a parade like this on a clear fall day — peacefully, freely, and with her family

“We’re here because of them,” she said.