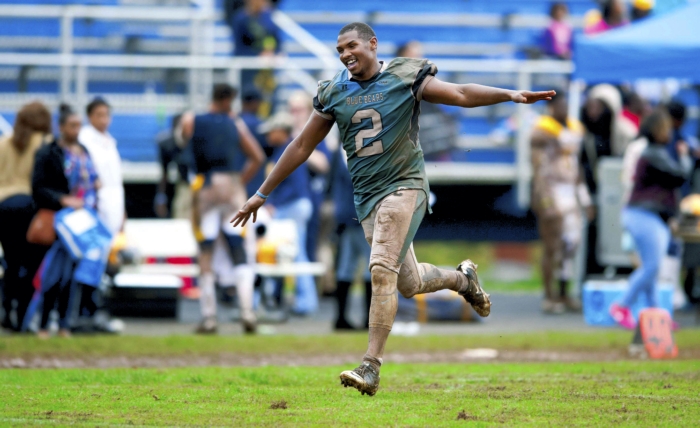 JON C. LAKEY / SALISBURY POST ... Livingstone quarterback Drew Powell celebrates the big win over Johnson C. Smith last Saturday at Alumni Memorial Stadium. The Blue Bears defeated the Golden Bulls, 35-12, in what was supposed to have been the team’s last game of the season. However, yesterday, Livingstone accepted a Friday night contest this week at North Greenville University in Tigerville, S.C.

SALISBURY — As Lee Corso on ESPN’s College Gameday says, “Not so fast my friend!”

Livingstone’s season finale last Saturday at home is suddenly not so final. The college announced on Wednesday that it has added a game, to be played on Friday.

A day after cleaning out their lockers, the players found out on Tuesday that they would play again.

The Blue Bears will travel to Tigerville, S.C., to play North Greenville, another NCAA Division II school with an open date on its schedule. Game time is 7 p.m. at Younts Stadium, across from the main entrance of the NGU campus.

The Crusaders, 6-3 overall, is independent in football and plays a lot of the schools in the South Atlantic Conference. North Greenville has played Catawba six times, the last being in 2014. Catawba replaced North Greenville with Limestone this season.

NGU initiated the possibility of playing, as the Crusaders still have hopes for the Division II playoffs, which start on Nov. 21. NGU needs another D2 game in order to help their case for the post-season.

Livingstone, a member of the CIAA, had to leave this weekend’s date open, in case it advanced to the conference’s championship game. Since the Blue Bears finished a game behind Southern Division leader Winston-Salem State, they have a spot on the schedule in which to play North Greenville.

Livingstone defeated Virginia-Lynchburg (48-19) and Central International (40-0) in September, but those wins are not reflected on its won-loss record. North Greenville had one “non-counter,” a 69-0 win against the University of God’s Chosen.

Coach Daryl Williams’ squad has a modest two-game winning streak, having beaten Fayetteville State, 42-35, in overtime on Oct. 31. Also, Livingstone has won four of its last five games, and narrowly lost to Winston-Salem State, 23-21, on Oct. 24. A stretch like that hasn’t happened at Livingstone in a long time.

“We’re excited about playing again,” said Williams. “We spoke to the kids and 100 percent of them wanted to play this game. They were pumped up at practice today (Wednesday).

Williams in concerned about NGU’s Ashton Heard, a running back who has eclipsed 1,000 yards this season in nine games (117.3 yards per game).

“We’ve got to stop him, but we’ll be ready,” said Williams. “We’ve got some threats on offense, too.”

Some of those threats are seniors who probably never imagined that they would get to play again. The Blue Bears’ large senior class includes stars such as quarterback Drew Powell, receivers Jalen Hendricks, Arthur Bowden and William Tate. In addition, kicker-punter Leo Manzo, safety Billy Moore and tackle Eric Horne, are seniors who’ll get to suit up one more time.

Livingstone’s offensive line, led by Shaquelle Sharperson, Michael Green, Ekanem Ekanem and T.J. Jefferson, seemed to have jelled during the last month. Powell has had time to pass and run, and running backs Jarius Richardson, Latrell Flowers and Marcus Baisey has benefitted from the excellent blocking at the point of attack.