Kenerly on three who died: ‘Our most precious asset’ 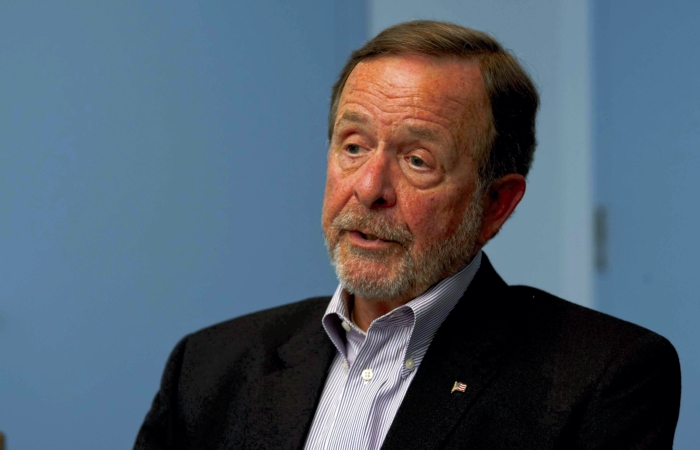 Retired district attorney Bill Kenerly has spoken on the topic of the Vietnam War. Kenerly served in the US Marine Corps, stationed along the Vietnamese Demilitarized Zone during his tour in Vietnam. This year marks the official 50th anniversary of U.S. entry into the conflict. Jon C. Lakey/Salisbury Post

War leaves veterans with memories — some they cannot shake and some they hold tightly.

Bill Kenerly says he thinks of three friends he lost in the Vietnam War all the time.

Kenerly has had a lifetime of experiences since the war, graduating from law school, raising three sons with wife Toni, serving as Rowan County’s district attorney for 20 years, enjoying retirement.

But these three men stay with him, and he wants others to remember them, too. They heard their nation’s call and responded. They gave their all when they could have taken an easier way out.

First, Forrest Hollifield. Forrest and Kenerly grew up across the street from each other. Kenerly remembers him as a happy-go-lucky kid who never smoked, drank or even uttered a cuss word in his presence.

Hollifield’s father had been a conscientious objector during World War II, and Forrest could have been draft-exempt if he wanted to do the same, most likely. But he signed up for Army ROTC while at Wake Forest University and went to Vietnam as an observer in single engine aircraft, spotting for artillery and airstrikes — “a back seat guy,” as Kenerly said.

He died when his plane crashed in Vietnam in 1971.

A dormitory at Catawba College was named in his honor in 1992, Hollifield Hall.

Second, Joe Hearne Rufty. The oldest son of Archie Rufty, Joe was named after an uncle who was killed in World War II. Joe’s brother, Bruce, was named for another uncle who died in the war. So their family had already given two family members to war.

Kenerly and Joe were the same age and went through Boyden High School together. Joe went on to graduate from the University of North Carolina at Chapel Hill. He was commissioned as an Army second lieutenant in March 1969 after graduating from Officer Candidate School.

Joe’s father was a well-known attorney; stepmother Frances had served as clerk of court. The Ruftys were involved in local politics, Kenerly said. Many families with such connections — and such past war losses — found a way for their sons to avoid dangerous assignments in Vietnam.

But not the Ruftys. And not Joe.

Sent to Vietnam on Nov. 10, 1969, Rufty went beyond just serving. He was “the point of the spear,” Kenerly said, commanding a platoon of about 40 men.

It was while he was leading that platoon that he was shot in the chest and died on Jan. 31, 1970. Kenerly was still in the Marine Corps. Joe’s widow, Jane — now Jane Rowland — asked Kenerly to be Joe’s body escort officer. He met Joe’s remains in Dover, Del., and flew home with him.

Joe was buried in Chestnut Hill Cemetery in Salisbury.

“Again, in my mind, a guy who could honorably — and I guess that’s the key for me — could honorably have avoided being in the position that he was in,” Kenerly said. But Joe volunteered — and lost his life.

Third, Charles Lee. He was one of Kenerly’s troopers in Vietnam, someone no one else from Salisbury would know.

Kenerly, a second lieutenant in the Marines, had three squads of about 13 riflemen each. Lee was one of the squad leaders.

Lee had dropped out of the University of Maryland to join the Marines. He and Kenerly wound up serving together in Vietnam. They were about the same age, in their early 20s, and got to be close.

“We were supposed to go into this area that no one had been in for awhile. We expected to meet fire, because we had taken fire from the area,” Kenerly said.

Lee was near the end of his tour of duty and had a bad case of ringworm, a skin infection. “I told him to stay behind,” Kenerly said.

“And of course he got killed that day,” Kenerly says.

Lee had been in combat 11 months before Kenerly even met him; he had only 40 days to go. “He’d paid his dues.”

But he wound up paying more.

Kenerly was wounded a month later. A bullet went through his left arm and into his chest. It was one of those million-dollar wounds, the kind that send a Marine home without a permanent disability.

Kenerly had gotten his assignment on Jan. 5 and had been  shot on April 5, 1968. In that three months, four of his men were killed and 15 were seriously wounded.

He had led a group of men who were 18, 19, 20 — a level of youth he didn’t quite recognize at the time, being only 22. They were the ones pulling triggers in the war in Vietnam.

“Other than my family, the thing in my life I’m most proud of is the three months I spent with those Marines in Vietnam,” Kenerly said.

People have an image of U.S. forces in Vietnam being made up of all draftees, smoking dope and getting in trouble, he said. “That just wasn’t true.”

“I still think the last sentence hasn’t been written about  Vietnam,” Kenerly said. “Eventually it will be put into some sort of historic perspective.”

But his personal perspective on war was forever shaped by three young men, good people whom he misses to this day.

Kenerly, now 70, sees the necessity of war; he believes the U.S. and its allies will have to go after ISIS. But he wants people to remember the human costs.

“Every time there’s an armed conflict, there are going to be some damned fine people that step up to do what they think their country wants them to do, and they’re going to get killed,” Kenerly said. “I think those people are our most precious asset, and that we should not waste them.”