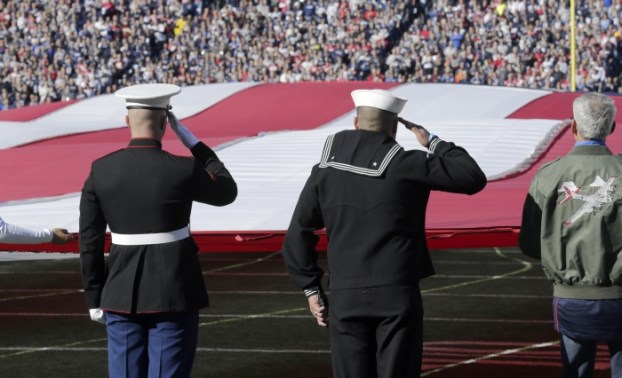 Members of the U.S. military salute as a giant American flag is unfurled on the field to mark the Salute to Service military appreciation campaign before an NFL football game between the New England Patriots and the Washington Redskins on Sunday. AP photo

The United States holds its military and veterans in high regard. A 2013 survey by the Pew Research Center about professions that do the most good found the military at the top of the list, followed by teachers and medical doctors.

Respect for the military comes into sharp focus today, on Veterans Day, a holiday that began as Armistice Day after World War I and was expanded to include all veterans in 1947. The nation takes a break from routine to thank those who have served our country.

Thanks are not enough, though. If we were honest with ourselves and our veterans, we would also extend them an apology for allowing the gap between the military and the civilian population to become so vast. Since the draft ended in 1973 at the end of the Vietnam War, the American public has steadily distanced itself from the military.

“The reliance since then on a professional military and enlisted volunteers has meant that only about 0.5 percent of the American public has served on active duty at any given time in the period since 9/11,” says a Pew report. Nearly 9 percent of Americans served in World War II, according to Pew. Compare that to the public’s military participation in the 1990-91 Gulf war — .8 percent (note the decimal).

That may be all the more reason we should value the sacrifices made by the men and women of the military. So few of us are willing to serve. We pay homage with special tributes during NFL games and Veterans Day parades. But it’s not enough.

The presidential proclamation for Veterans Day 2015 puts it well:

“Our veterans left everything they knew and loved and served with exemplary dedication and courage so we could all know a safer America and a more just world. They have been tested in ways the rest of us may never fully understand, and it is our duty to fulfill our sacred obligation to our veterans and their families. On Veterans Day, and every day, let us show them the extraordinary gratitude they so rightly deserve, and let us recommit to pledging our full support for them in all they do.”

Editorial: Give to United Way

The United Way of Rowan County is nearing the end of its 2015 fundraising campaign, having reached only 77 percent... read more