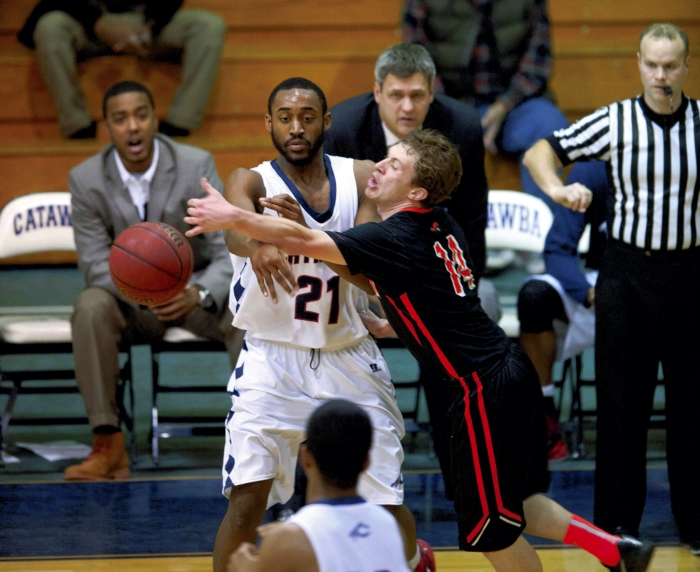 SALISBURY — Catawba men’s basketball coach Rob Perron is adept at handling X’s and O’s, but ACLs are providing more of a challenge.
An ACL injury to dynamic guard Rakeen “Rock” Brown altered the course of Catawba’s 2014-15 season, Perron’s first at the helm.
The latest ACL injury has knocked first-team All-SAC forward K.J. “Swish” Arrington out for the upcoming season.
“Injuries happen, and you just try to keep the most positive outlook that you can,” Perron said. “The injury to Rock last year meant a lot of guys got valuable minutes and gained valuable experience. K.J.’s injury is tough, but we’re much better equipped now than we were a year ago to compensate for an injury to a key player.”
Arrington is working to return for the 2016-17 season. That’s when Catawba should be a handful.
As far as this season, like their head coach, the Indians are determined to maintain a positive outlook at refurbished Goodman Gym.
Without Arrington’s 17.7 points per game and vigorous rebounding, it’s unlikely any championship banners will be hung, but Arrington is the only one of the team’s top 10 scorers who isn’t back in uniform.
Perron sees perennial beast Lincoln Memorial, talented Queens and Carson-Newman, which has the league’s top performer in Carson Brooks, as the South Atlantic Conference’s big three, but Catawba could be one of the contenders right behind them.
“It’s not like we’re looking past this year to the year when K.J. returns, by any means,” Perron said. “We can have a very competitive team. We’ve got a good mix of young and old.”
This Catawba team will start with electrifying guard Jerrin Morrison, last season’s SAC Freshman of the Year. The 6-foot-3 Morrison averaged 15.5 points and 5.1 rebounds and provided major excitement with dazzling dunks. His reputation as a high-flying finisher was well-earned, but he also shot 41 percent on 3-pointers. He scored 20 or more six times, including a 39-point outburst against Newberry.
Morrison is strongly built at 200 pounds, so he can defend small forwards as well as guards. He’s got a lot going for him and was named to the preseason All-SAC second team.
“Jerrin can score in bunches,” Perron said. “We’re expecting him to be a more complete player as a sophomore — fewer turnovers, more assists, more efficient scoring.”
Jameel Taylor would’ve gotten more attention last season if he hadn’t been sharing the floor with Morrison. Taylor also made the All-SAC Freshman squad. The 6-3 Taylor isn’t flashy, but he averaged 10.5 points and 4.8 rebounds and dished out a team-high 84 assists. He played both guard positions and some small forward. He’s an exceptional defender and is the glue for the Indians. None of the Indians are selfish, but Taylor defines the team-before-me concept.
“You could make a case that he was our team MVP as a freshman,” Perron said. “He can play three positions depending on the matchup and he always defends the best perimeter scorer.”
Brown was averaging 15.4 points per game when he went down last season. He’s still not quite 100 percent, but he’s getting close enough to a clean bill of health that he will be one of Catawba’s key players. At his best, he’s a penetrating, draw-and-kick guard, and that’s a commodity Catawba lacked after he was hurt.
“He’s getting better every day,” Perron said.
Catawba returns battle-tested post players Troy Warren, Vismantas Marijosius and Julian Sampah. That three-headed monster usually combined for 15 points and 15 rebounds a year ago.
The 6-9 Warren had a startling, 25-point, 18-rebound effort against Queens, but he’s primarily a defensive presence and shot-blocker. The 6-6 Marijosius is a fearless banger, but he can also shoot with 3-point range. Sampah, 6-7, is active and springy.
Usually, at least one of that trio is on. When two of them are on, Catawba is really good.
Also back in action will be guards Reggie Perkins and Ben Sealey, both of whom have enjoyed their clutch moments. Also returning is smooth small forward Andrew Ingram, who performed admirably when Arrington missed some time last season.
Former Carson High star Nick Houston, a floor-stretching shooter, is back from an ACL injury, while Gregory Childress, a gym-rat guard who redshirted as a freshman, adds backcourt depth.
As far as new faces, forward Malik Constantine, a 6-6 freshman from Charlotte’s Olympic High, is the best bet to make an immediate impact.
“He’s thin and guys in our league are going to try to rough him up,” Perron said. “But he’s an exceptional athlete and he can score. In our two scrimmage games, he shot 16-for-23.”
Jeremy McLaughlin, a 6-7 redshirt freshman, will help inside.
“He’ll have some nights with five points, five rebounds and five fouls,” Perron said with a smile.
Freshman guards Jordan Barber (Weddington) and R.J. Robinson (Durham Hillside) have been impressive and have a bright future. If everyone stays healthy, one of them may be redshirted.
“It’s going to be different guys getting it done for us on different nights, Perron said. “Offensively, we’ll need to recognize who has the hot hand and who has the favorable matchup. Defensively, we can put a good pressing team on the floor or we can put a long team on the floor and play some zone.”
Catawba was 14-15 last season and 11-11 in the SAC. That doesn’t sound inspiring, but it actually was the Indians’ best season since they won 20 games in 2009-10. Catawba improved dramatically from a 7-19 effort in 2013-14.
“We were picked 11th (in a 12-team league) prior to last season and we’re picked a good bit higher (tied for fifth) this year, so we’ve earned some respect around the league,” Perron said.
JoJo English, who starred at South Carolina and played professionally, and volunteer Ben Veshi are Perron’s assistants.
Catawba travels to Florence, S.C., on Friday and will play Francis Marion in an unusual 11:30 a.m. game that is part of the Peach Belt Conference-South Atlantic Conference Challenge. Catawba will play UNC Pembroke in Florence on Saturday at 5:30 p.m.
The first SAC game is at Lenoir-Rhyne on Nov. 21.
The first game at Goodman Gym is Nov. 24 vs. Coker.