Carson advances to third round with shutout of South Iredell 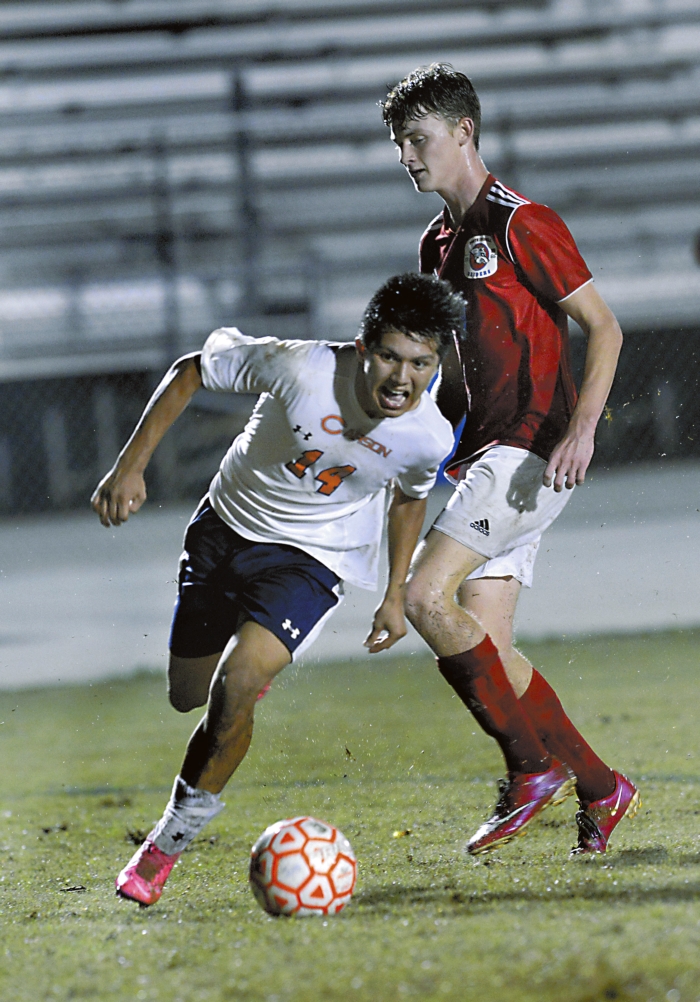 CONCORD — Carson’s soccer team spent much of the first half working the body against heavyweight South Iredell in Tuesday’s second-round state playoff match.

In the second half, the Cougars landed a haymaker.

“We have one of the best offensive teams in the playoffs,” coach Ryan Winchip said at Central Cabarrus High School, where the Cougars scored four late goals and rolled to a 6-0 victory. “And they were a good defensive team, so it was going to be a battle of wills. The thing is we can rack them up. If one of our shots goes in, the confidence builds and we get going. We’re capable of putting a lot on a team quick.”

Third-seeded Carson (20-1) got up to speed midway through the second half and never slowed down. “They made us look sluggish,” SI coach Dave Basinger said after the Vikings (16-7) had a six-game winning streak snapped. “Their speed of play with the ball was so much faster than ours. We weren’t bad tonight, but they were way faster.”

Playing on the built-for-speed turf field at Central, Carson received three goals and two assists from Brandon Flores and a goal and a assist from senior workhorse Colton Correll. Still, the Cougars spent much of the first half launching shots that sailed wide left, wide right and clear over the South cage.

“In the first half we weren’t really hitting them good,” Correll acknowledged. “We weren’t finishing what we should have been finishing.”

It took nearly 29 minutes before Carson was able to beat SI keeper John Pike. The Cougars took a 1-0 first-half lead when Correll fought off a couple of defenders before sliding a well-placed pass to the elusive Flores, who rifled a 15-yard shot into the net.

“Those two work so well together,” Winchip said. “Brandon’s got the finesse, Colton supplies the power — and they’re both really unselfish. We’re lucky to have two strikers like them.”

It was signature play by Correll, now a 22-goal scorer. “I like to use my body on the field,” he said. “You’ve got to be strong on the ball, especially against these defenders. They are some big people.”

Carson nourished its lead 15 minutes into the second half. This time Flores sent a crossing pass from the right side to junior Ranuel Vasquez, who settled the ball and blasted a left-footed shot past Pike for a 2-0 lead.

“Khalid (Myers) played it to me and I didn’t know what to do with it,” said Flores. “Everybody was marked. (Vasquez) was just sitting on the top of the box.”

Winchip offered an interesting aside. “It was funny because I had just gotten on Ranuel for not challenging hard on a tackle,” he explained. “And two minutes later he scores and everyone throws their hands up and goes, ‘See coach, there you go.’ He kind of showed me up a little bit. If he shows me up that way I’m completely OK with it.”

Carson’s high-octane offense showed up moments later. The Cougars scored four goals in a 5:24 span to bust the match open, beginning when Correll headed a feed from Flores off a defender and into the South net with 20:51 to play. Flores scored on a comical play with 19:10 remaining when he headed a high-bouncing ball over Pike’s head from 20 yards out. Next came Flores’ 29th goal of the season off a pass from Ricky Maldonado, who closed the scoring with a corner-kick conversion with 15:07 to go.

Defensively, the Cougars were hardly challenged. South was outshot, 19-4, and winning keeper Grayson Owens made three saves to secure Carson’s eighth shutout. “In our last game, we were just kicking it out of there,” senior defender Daniel Nava said. “Tonight we tried to possess the ball more.”

Carson will bring a 10-game winning streak into its third-round match against No. 6 Asheville (18-3-2) at home Thursday night. Game time is 6 p.m.

“That was our first complete game of the season,” Winchip concluded. “Everyone on the field played 100 percent. When we play like that it’s tough for anyone to beat us.”