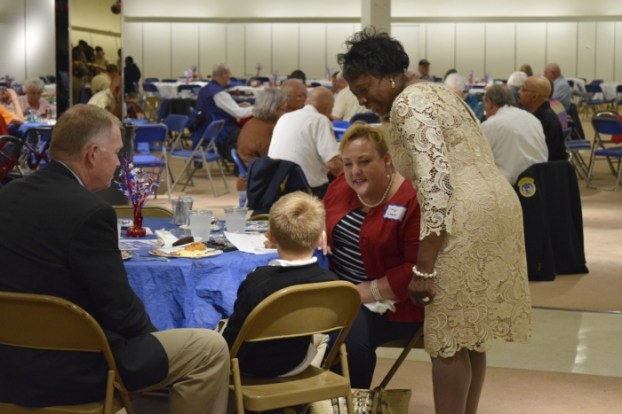 Thelma Luckey of Thelma’s Down Home Cooking says that Saturday’s veterans appreciation dinner is her way of giving back.

A retired staff sergeant from Operation Desert Storm, Luckey is a veteran herself, but she calls herself a “baby vet.” Many veterans at Saturday night’s dinner fought in the Vietnam War, the Korean War and even World War II.

“They were the ones that paved the way before me,” she said.

The dinner, held at the old J.C. Penney’s store at West End Plaza, was free for veterans and their families. Luckey says she feels like many veterans are down on their luck, and might not be able to afford attending an event like this if they had to pay. But that doesn’t mean they don’t deserve the recognition.

Luckey states that many veterans, especially those of the Vietnam War, never received any appreciation for their service and the years they sacrificed.

“This is something I can do to give them a thank you and a welcome home,” Luckey said.

Luckey hosted a similar dinner last year and got so much positive feedback from the event that she’s decided to make it a yearly celebration.

“It’s been such a great turnout and people were so excited about it,” she said.

This year’s dinner drew an estimated 700 people, Luckey said. Tables were crowded and full, and the lines for the warm food provided by Thelma’s Down Home Cooking stretched around the walls of the building.

While veterans waited in line, the Salisbury Swing Band set the mood with a little music from every era. The dinner also featured a presentation of the colors by the Rowan Honor Guard and speeches by Luckey, County Commissioners Chairman Greg Edds and Director of the W.G. Hefner VA Kaye Greene.

By Wayne Hinshaw For the Salisbury Post On days when the weather is rainy, on days when it is easier... read more