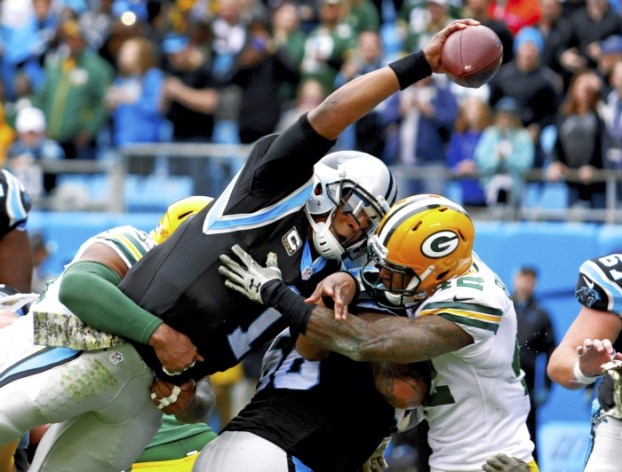 Carolina Panthers' Cam Newton (1) reaches the ball over the goal line for a touchdown against the Green Bay Packers in the first half of an NFL football game in Charlotte, N.C., Sunday, Nov. 8, 2015. (AP Photo/Bob Leverone)

CHARLOTTE (AP) — Cam Newton was determined to protect the Carolina Panthers’ house on Sunday at all costs.

That meant the fifth-year quarterback tearing down a large Green Bay Packers banner before the game that was hanging over the inside wall of the stadium — and later taking down the Packers by throwing for three touchdowns and running for another in a 37-29 win.

Newton threw for 297 yards as the Panthers (8-0) took an important step toward securing home-field advantage throughout the NFC playoffs. Every other NFC team has at least two losses, including the Packers (6-2).

Carolina led by 23 points in the fourth quarter before Aaron Rodgers rallied Green Bay and nearly gave the Packers a chance to extend the game into overtime.

Rodgers threw for 369 yards and four TDs, but couldn’t take advantage of one of Newton’s few mistakes: an interception with 3:38 left in the game that gave the Packers the ball at the Carolina 22. Down by 8, Rodgers fourth-and-goal pass from the Carolina 4 was intercepted by linebacker Thomas Davis.

It capped a frustrating day for the Packers. Rodgers was so annoyed he threw his tablet on the ground on the sideline after watching the replay.

“We had an opportunity for a pitch-and-catch touchdown, and I got scared by something,” Rodgers said. “I can’t explain. It was a mistake for me, and something I’ll think about on the ride home. I don’t know who was in my face; all I know is I had Randall (Cobb) wide open for a touchdown.”

Earlier in the game, Julius Peppers refused to give the ball back to Newton after the quarterback scored a touchdown, instead electing to toss the ball down the field in the opposite direction. Newton retrieved the ball and gave it to a fan.

And, down by 37-14 in the fourth quarter, Ha Ha Clinton-Dix began jawing at Peppers, who was seated on the bench. Peppers stood up and talked back before B.J. Raji stepped in, shoving Clinton-Dix backward.

“It doesn’t concern me,” Packers coach Mike McCarthy said. “It’s football. Things happen on the sidelines. It’s a product of us not playing to our standard. Sometimes things like that happen. I have no concerns.”

It was the second straight game the Panthers nearly surrendered a commanding fourth quarter lead. Carolina lost a 17-point lead on Monday night to Indianapolis before rallying to win 29-26 in overtime.

“We make it tough, I don’t know why,” Panthers tight end Greg Olsen said. “It’s almost like we like torturing ourselves.”

Coach Ron Rivera said the Panthers can’t put themselves in that position.

“When you have somebody down you have to make plays and put them away,” Rivera said.

The dual-threat quarterback was dominant in the first half, throwing for 209 yards and two touchdowns and rushing for 37 yards and another score.

The Packers opened the game in man coverage and Newton made them pay right away by finding huge holes to run through for big gains.

Carolina also had a bevy of big plays in the passing game.

Carolina’s first score was set up by a 59-yard pass to Jerricho Cotchery. Newton gave Carolina the lead for good at 10-7 with a 52-yard pass to rookie Devin Funchess leading to a 7-yard TD pass to Greg Olsen. Later, he came back with a 39-yard touchdown strike to Philly Brown with 41 seconds left in the half.

He also scored his 38th career TD rushing in the first half, moving into a tie for second place all-time among quarterbacks with Kordell Stewart. Only Steve Young (43) has more.

Still, Rodgers wouldn’t give in.

His 29-yard TD pass to James Starks and a 2-point conversion toss to Davante Adams cut the lead to 15. Then, on fourth-and-14, Rodgers rolled to his left evading three pass rushers and fired over the middle on the run to James Jones for a 36-yard completion to keep Green Bay’s hopes alive. Rodgers completed the drive with 3-yard pass to Richard Rodgers, his second touchdown of the game, to cut the lead to 37-29.

“He is a first ballot Hall of Fame quarterback who doesn’t quit,” Rivera said.

Notes: The Panthers sacked Rodgers five times. … The Panthers ran for 130 yards, marking the 19th straight game they have gained at least 100 yards on the ground. … Eddie Lacy was a nonfactor and left with an ankle injury. He had 10 yards on five carries.

By Dennis Davidson dennis.davidson@salisburypost.com SALISBURY —That pesky monkey is finally off the backs of the Blue Bears. That’s right, Livingstone’s... read more