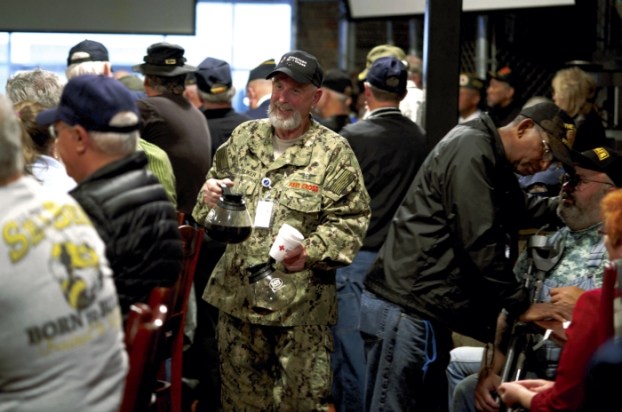 They’re places where veterans can pull up a chair, munch on a donut, sip a cup of coffee and talk — about anything.

Tilley’s provides free coffee and pastries for veterans on the first Monday of every month. It’s a place for veterans to gather together and talk with each other about their experiences.

“Nobody who’s not a veteran can know what they’ve gone through,” Rummage said.

The coffee shops give veterans a chance to clear the air and talk about their service — or anything that they need to.

Thelma Luckey, a retired staff sergeant who served in Desert Storm and is owner and operator of Thelma’s Down Home Cooking, says it’s not unusual for veterans who attend her Frontier Coffee Shop on Tuesday mornings to break a decades long silence about their tours of duty.

The coffee shops are free of alcohol, and show-runners like Luckey try to keep the talk equal and to steer people clear of arguments. It’s meant to be a healing place, Luckey says.

“I think it’s just awesome to just see all the vets fellowshipping together,” she said.

The Frontier Coffee Shop started up in April 2014 and is modeled after Richard’s Coffee Shop in Mooresville.

Richard’s is named in honor of Vietnam veteran Richard Warren, who owned and operated Pat’s Coffee Shop in downtown Mooresville. After his death in 2009, his former customers and Welcome Home Veterans, Inc. opened Richard’s Coffee Shop, a coffee shop and living military museum, in his honor. It’s a 501(c)(3) non-profit that hosts a veteran’s coffee shop every Thursday morning.

Tilley’s coffee shop is modeled after a similar movement in Winston-Salem. Rummage said at the time, they didn’t realize that Thelma’s also had one — they just thought it sounded like a good idea. While Rummage is not a veteran, he says helping run the coffee shop is his way of giving back.

“Most of these guys have sacrificed years of their lives to service,” he said.

For Luckey, providing a place for veterans to connect, grow and heal is what it’s all about.

“It just really brought a joy to me,” she said.

Frontier Coffee Shop at Thelma’s Down Home Cooking in West End Plaza offers free coffee and donuts for veterans every Tuesday at 10 a.m.

Tilley’s Harley-Davidson of Salisbury, 653 Bendix Drive has free coffee and pastries for veterans on the first Monday of every month at 10 a.m..

Thelma Luckey of Thelma’s Down Home Cooking says that Saturday’s veterans appreciation dinner is her way of giving back. “This... read more