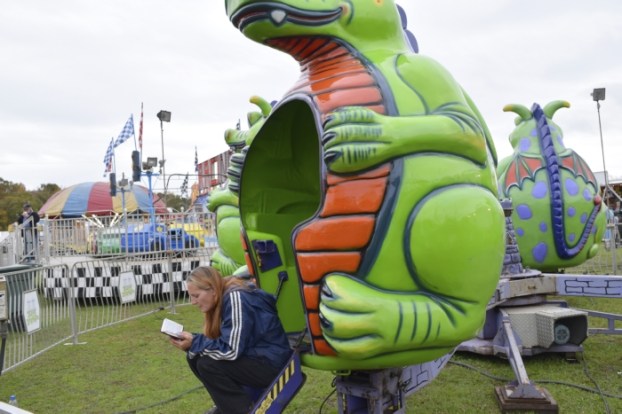 Rebecca Everhart reads while she waits for someone to pick her ride.

Lines were short at the “Rowan County Fair Part 2: Let the Sunshine Roll.” Despite the hope evident in the title, the small fair running at the Rowan County Fairgrounds has been beset by cloudy skies and slow, persistent rain.

In a previous article, Fair Association President Randall Barger told a Post reporter that the Rowan County Fair costs about $125,000 to put on every year. This year’s fair only brought in about $30,000, resulting in a huge loss for the Fair Association.

The Fair Part 2 opened Thursday evening at 5 p.m. with $1 parking, free admission, and $1 rides. There was a steady crowd, B&K Carnival Company employees said, but they reported that it still closed early. The same rain that washed out the first part of the fair has returned to dampen part two.

All proceeds from parking go to the Jaycees, Barger reported in a previous article, and admission is free till the fair closes Sunday Nov. 8. But even $20 armbands didn’t seem enough to tempt people to visit the fair Saturday.

The fairgrounds resembled a ghost town, with just a few families showing up by 2 p.m. Fair workers Lisa Rowen and Jean Dennis say this has been pretty typical of the Fair Part 2, and mentioned that the so far they’ve closed early every night. Rowen and Dennis are with B&K Carnival Company — the same company that runs the Faith Fourth of July Fair every year.

“This is the best auction around here,” hopeful buyer Paul Allyn said.

But he and his wife weren’t planning on trying out any of the rides.

For the families that did brave the puddles, the fair was a dream. When the rain held off yesterday, the temperature was a balmy 69 degrees, and there was no need to worry about losing a kid in the crowd.

Chris Cooper, of Concord, brought his three children to the fair and said that they’ve been having a great time.

“It’s been great,” Cooper said, “There’s nobody here. We can get on and off the rides.”

“We really did this for the community,” he said.

Love said the Association wanted families to be able to come out with their kids and enjoy rides, and it’s been unfortunate that rain crashed the party yet again.

“Unfortunately, the weather is the one thing we don’t have any control over,” he said.

Saturday night’s demolition derby was moved to Sunday due to mud on the track. Love said workers tried to even out and drain the field, but after a tractor got stuck in the mud, he knew cars wouldn’t be able to race on it.

While it’s not alleviating the Fair Association’s debt, fortunately the fair isn’t a big loss for them, either, Love stated.

“Other than the power and the manpower, we really didn’t have a whole lot invested,” he said.

Events like the derby were paid for by sponsors, and insurance has covered a lot of other costs. But there’s hope. Love says the association doesn’t “have a choice” but to work towards making it till next year’s fair.

“We’re definitely looking at some alternatives and new events to carry us through to the next fair,” he said.

In the meantime, Love hopes that people will come out today. A gospel band will perform starting at 4 p.m. and armbands are $20 all day. The demolition derby will be held at 3 p.m., admission is $5. The rain is supposed to hold off–and while the promised sunshine may not roll,the weather should be fine.

“The weather’s good, the rides are running,” Love said.

Rowen and Dennis hope people will brave the puddles and the chance of rain. Rides will run as long as the weather holds, and the games run even in bad weather. They have high hopes for Sunday’s crowd.

By Susan Shinn For the Salisbury Post CHINA GROVE — Everyone knows that Farmers Day is the hottest ticket in... read more