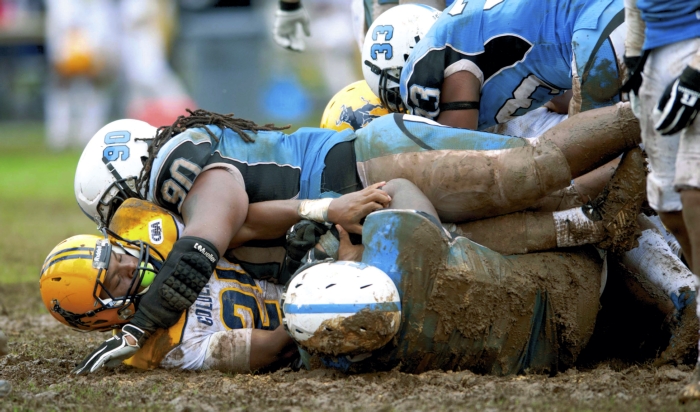 SALISBURY —That pesky monkey is finally off the backs of the Blue Bears.

And the game wasn’t even as close as the score indicates. In very muddy conditions after Salisbury’s week of rain, the Golden Bulls managed just 67 total yards and four first downs. Livingstone may have been looking at a shutout had it not been for two electrifying kick returns by the Bulls’ Fred Scott.

To celebrate the first football game between two historically black colleges in 1892, the Commemorative Classic began in 2009 and J.C. Smith had won the previous six games. The Blue Bears’ victory yesterday keeps the trophy in Salisbury for the first time.

Livingstone ends its season at 5-3 overall and 4-3 in the CIAA. J.C. Smith fell to 4-6 and 3-4. The Blue Bears also had two wins against NCAA-deemed “non-counting” schools.

“I couldn’t be more happy and proud of these guys,” said Livingstone coach Daryl Williams. “Winning this game was big because 17 years of losing is finally over. We started on a high note (season opener at Benedict) and ended on a high note.

“I’ve coached for 18 years and this is one of the finer moments,” continued Williams, in his third year at Livingstone. “From where we’ve come from to now, it is special. It was a total team effort. Everybody’s bought into the process and we’ve got great support from our administration, which has given us everything that we need to be successful.”

While the Livingstone defense was shutting down the Golden Bulls at every turn, the offense almost appeared to be playing on a dry field on a sunny day.

Drew Powell, the Blue Bears’ decorated four-year starter at quarterback, went out “on top” by completing 21 of 33 passes for 269 yards and two scores. Sure, a few passes slipped out of his hand, one of which he caught himself, but for the most part, he was Powell being Powell.

Powell’s rushing yards were only 27, but some of that was from losses when he slipped down in the muddy backfield. He connected with fellow seniors, receivers Jalen Hendricks, Will Tatum and Arthur Bowden, on big plays as usual.

Powell found Hendricks six times for 79 yards, Bowden once for 16 yards and Tatum four times for a game-high 109 yards.

“To avenge our rival that we haven’t beaten since I’ve been here and go out on top, it’s a great feeling,” said Powell. “I’m proud of my teammates, the way they played today in these conditions.”

“That earlier game in bad conditions, we had a tough time,” said Powell, remembering the team’s nine turnovers that day. “But this time, we just put that behind us and said, ‘we’ve got to do whatever it takes to win this game.'”

It was J.C. Smith which had trouble with turnovers on Saturday. The Golden Bulls fumbled six times in the mud, and was lucky to lose only three of them. And quarterback Harold Herbin came off the bench in the third quarter to throw two interceptions.

“The defense gave us the ball in great field position and we just made the plays to capitalize,” said Powell. “In the third quarter, we seniors knew that we had just 30 more minutes on this field and we were not going to be denied today.”

Livingstone outscored the Bulls in the third period, 22-0, salting the game away.

The game’s first 12 minutes was a slipping and sliding punt-fest.  Then 19 points came in a hurry.

On Livingstone’s third possession, Leo Manzo’s strong 51-yard punt to J.C. Smith’s 40-yard line quickly came back the other way as Scott returned it to the Blue Bears’ 7.

After a running play lost two yards, starting QB Jordan Lane found Eugene Holmes for a nine-yard TD pass with 2:47 left in the first period. J.C. Smith, which would complete only one more pass all day, botched the extra point for a 6-0 lead.

The Blue Bears then quickly went 72 yards on five plays, with Powell capping the drive with a nine-yard scoring romp around the left end. Manzo’s kick made it 7-6. The key to the drive was a 52-yard pass from Powell to Tatum that ended up at the JCSU 19-yard line.

The lead lasted just 14 seconds has Scott took Manzo’s ensuing kickoff and went 89 yards to the end zone. Again the extra point was missed, but the Bulls, with almost no offensive yardage, led 12-7 with 48 seconds left in the first quarter.

As the game moved into the second period, Livingstone went on a seven-play, 54-yard drive that reclaimed the lead at 13-12. Powell connected with Hendricks on consecutive plays of 17 and eight yards, the latter for the touchdown.

The third quarter was all Livingstone. Powell hit Hendricks for a 28-yard scoring pass midway through the period and then two interception returns broke the game open for the Blue Bears.

First, cornerback Kovarius Williams had a 37-yard return of an interception to the Bulls’ 13-yard line. On the next play, running back Marcus Baisey avoided pursuit deep in the backfield, got a great block from Latrell Flowers and sprinted into the end zone. Manzo’s PAT put the Blue Bears ahead, 28-12.

Two series later, Herbin was picked off by linebacker DeMarcus Nolan, who went the distance, 55 yards, for another touchdown and a 35-12 lead. Suddenly, the game was pretty much over.

“I saw Freddy (Scott) come out and I knew that he was their go-to receiver,” said Nolan, a junior who was the CIAA’s Linebacker of the Week for his performance against Fayetteville State. “I just jumped the route and ‘housed’ it. I just did my job and made a play.  I bobbled it a little, but recovered … I had to get it.”

The fourth quarter was more of victory lap than anything else for the Blue Bears. Williams allowed Powell to even return a punt, which he did for 34 yards, and got some linemen some carries at running back.

Eric Horne, a 330-pound senior defensive tackle, had an eight-yard carry that had the entire Livingstone sideline jumping up and down. “That was fun,” said a smiling Horne later, “but shutting down J.C. Smith’s run all day was even better.”

JCSU’s 67 total yards paled in comparison to Livingstone’s 403, but the Blue Bears also had three turnovers which kept the game close until the explosive third quarter.

“Not good enough,” said JCSU coach Kermit Blount. “We turned it over too many times and in these field conditions, you can’t afford to do that because you’re not going to get that many opportunities to make something good happen. We generated no offense today. We’ve got to get better up front and we will. We’re going to turn this JCSU program around.”

Note: Something caused ill feelings between the two teams during the post-game hand-shake line, causing a big tussle that went on for several minutes. There were some punches thrown and jerseys ripped to the point that Livingstone and Salisbury police were on the field, assisting the coaches from both teams, who were trying to calm the situation. When order was restored, J.C. Smith went to their locker room and Livingstone remained on the field for the trophy presentation.