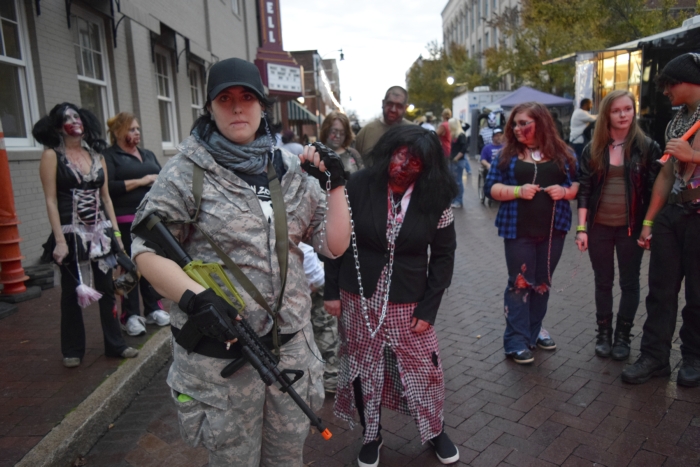 It was kill or be killed at last night’s Zombie Walk as more than 150 participants came decked out in blood and brains and ready to infect downtown Salisbury.

This is the sixth year Salisbury has hosted a zombie walk, and previous events have attracted nearly 1,000 participants. But the 2015 event was a little slow, Mary Thielemann, vice president of Rowan County, NC Zombie Outbreak Response Team, said. The walk was originally supposed to happen on Oct. 1, but was rescheduled when hurricane Joaquin blew through. Thielemann says she thought a lot of people dropped out after that, and that cloudy skies kept more people indoors.

“I think the threat of bad weather kept people away,” she said.

But many were still eager to get out, paint up and go in search for brains. The dystopian celebrations began at 1:30 p.m. with band performances in Nashville Nights and Uncle Buck’s All-American Pub and Grill. East Fisher Street was roped off for vendors and Salisbury’s own zombie apocalypse was unleashed.

The crowd was small, but some zombie fans traveled far for the chance to join the walk. Lance Hoffman and Sabrina Trimarchi drove down from Maryland. Hoffman says that he and his step-daughter love “The Walking Dead,” a comic series and AMC television series about a dystopian future where most of the world’s population has fallen prey to a zombie-like disease. Hoffman says he hasn’t heard of a zombie walk in Maryland, and doesn’t think it would be a big hit in the state.

“They don’t have this by us,” Hoffman said.

But he’s been friends with Thielemann for several years, and always enjoys her stories about the Zombie Walk.

“We always see the pictures,” he said, “and we wanted to do it.”

Madison Pittman recently moved back to Salisbury and saw the Zombie Walk as an excellent opportunity to test out her special effects make-up skills. Pittman says it’s been a hobby of hers for a few years, but this is her first chance to try it out zombie-style.

Angela Greening brought her daughter, Alexa, with her to the event. Angela is a “Walking Dead” fan, and says she wasn’t sure how her seven year-old daughter would handle the event, at first. But joining the walk was partly her daughter’s idea, and Alexa was eager to get started.

The walk includes activities like a rock climbing wall, and the original Oct. event featured a scavenger hunt. And the make-up and costumes are not something parents need to be worried about, she says.

“You know that it’s not real,” she said.

At 5:30 p.m.,  the undead livened up downtown as they shambled through the streets. While the event is free to attend and dress up, every re-animated corpse that joins the official march has to pay a registration fee. All proceeds of the walk are donated to the Humane Society of Rowan County, Mr. Mike’s Food Pantry, and Downtown Salisbury, Inc.