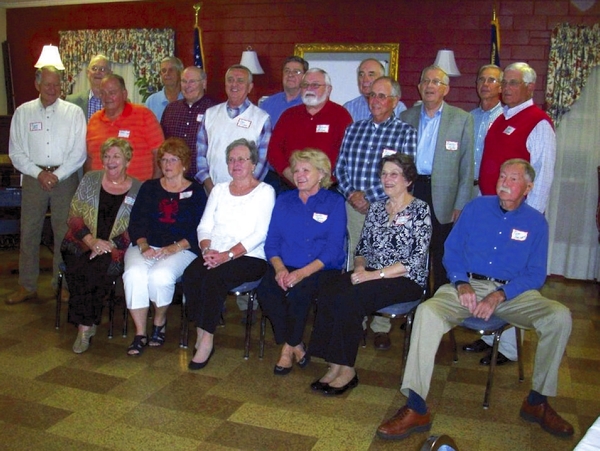 The 1960 Class of North Rowan High School held its 55th class reunion on Friday, Oct. 9 at Ryan’s in Salisbury and on Saturday, Oct. 10 at the Spencer Woman’s Club.

All class members and spouses enjoyed a wonderful buffet meal.

Windsor Eagle served as emcee for entertainment for the evening. Friendships were renewed and the good old times at North Rowan still remain after all these years. Each graduate was given a chance to update the class on thier lives.

A memorial table was set up with framed pictures of each of our 16 deceased class members. As each member’s name ws called, a candle was lit in their memory.

Everyone enjoyed the reunion very much and it seemed to be the best one ever.

The ninth Yadkin Mill Village Reunion was held Sept. 26 at the Yadkin Baptist Church fellowship building with approximately 40 present. Those in attendance enjoyed the fun fellowship, the geat food and reminisced about growing up and living in the Yadkin Mill Village. Gifts were given to the oldest female present, Irene Parker Clark, and to the oldest male present, Ernest Lanning. Trudy Parker Hassenplug and her husband Bill received the gift for traveling the longest distance. The 2016 Yadkin Kill Village Reunion will held Sept. 24, 2016.

Of those pictured in the class photo, there were six people present at the reunion.

Charles and Brenda Elliott of Statesville recently enjoyed a visit from Ed and Pam Landers and Joe and Jamie Seagroves.

Charles, Ed and Joe served together in Viet Nam from 1970-1971. They planned this visit after attending a reunion held in Gatlinburg, Tenn. last year for the 1st Air Calvary Division, Alpha Company, 2nd Battalion, 7th Cavalry, which was also known at Cold Steel Alpha.

Many memories came back among all the veterans of Cold Steel Alpha, some such as Charles, Ed and Joe after not seeing each other for 44 years.

The company was given this name due to the fact that they patrolled the jungles of Viet Nam and Cambodia with fixed bayonets. During this period they were one of the highest decorated companies of the 1st Air Cav because of the number of contact with the NVA enemy and the many weapon caches they discovered in Nam and Cambodia.

The group shared a special dinner in honor of the 36 comrades during the reunion that they lost in either Viet Nam or Cambodia. The group was also honored by the attendance of the mother, sisters and a brother of Vernon Rainey, which was the last casualty prior to the group leaving Viet Nam.

Charles, Ed and Joe plan to share many more reunions and visits together along with all the other men of Alpha Company.

Officer Cooper and cadets spoke about Halloween safety and distributed candy to the children. Members of the Ladies of Eloganze Social Club — Robin Taylor, Marlene Chambers, Barbara Summers and Lisa Shaw — set up booths and painted Halloween faces on the children which offset their costumes.

Commander Mae Carroll noted that this was the first time seven organizations had united to provide a high quality Halloween festivity for the West End neighborhood children. Councilwomen Karen Alexander provided more than 150 homemade cookies to the children and enjoyed music “wobble-wobble” provided by “DJ Neak” (Shenita Russell), sponsored by Comrade Wade Murphy. Children’s book atuhor Comrade Meesha Baig dressed in a witch costume and mesmerized the audience with Halloween stories and rules and tips for Halloween safety. She also danced with children and took photos with them.

Alpha Delta Kappa is an international organization of outstanding female educators founded in 1947. The goals of the sorority include: educational excellence, altruism, and world understanding.

The celebration closed with the singing of the “Lamp of Alpha Delta Kappa.” Nine chapters of the sorority joined to celebrate their theme of Cultivating Sisterhood. For more information on Alpha Delta Kappa visit alphadeltakappa.org or contact any ADK sister.

6:30 – 7:30 pm Thursday, Nov. 12 with Jane B. Taylor, founder of the domestic violence shelter in Charlotte, presently known as the Safe Alliance Domestic Violence Shelter. This forum is free.

Sponsored by American Association of University Women, Salisbury branch. Held at the Fellowship Hall of First United Church of Christ, 207 West Horah St. Use the ground entrance at the rear of the church.  Contact: Dr. Carol Cody, president, codycarol@bellsouth.net, http://salisbury-nc.aauw.net