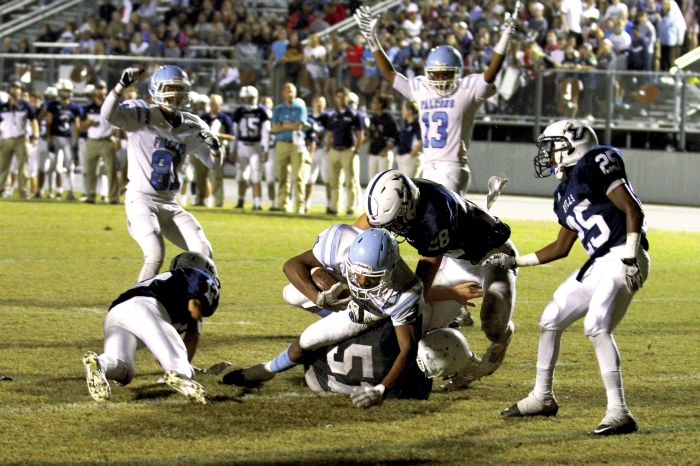 West Rowan's Jovon Quarles (3) crosses the goal line to put West on the board first. Photo by James Sipes, for the Salisbury Post.

HARRISBURG — West Rowan had the smile wiped off its face Friday night.

Just when it seemed the Falcons had everything in order in their SPC finale at Hickory Ridge, disorder prevailed and they scurried home with a 28-21 loss.

“This one hurt, but we’ve got to be ready to go next week in the state playoffs,” coach Joe Nixon said after West (8-3, 7-2) finished tied for second place in the league standings. “Still, our kids fought like crazy.”

On a night when West’s defense staged two goal-line stands, Hickory Ridge (7-4, 7-2) was clearly the better team. The Ragin’ Bulls rushed for 398 yards, scored three second-half touchdowns and took their only lead when slot back Petey Reaves scored on bizarre, 43-yard TD run with 2:36 remaining.

“We just gave up too many points, too many big plays,” said West defensive back Daquan Byrd. “We didn’t execute when we needed to.”

West’s offense scored on a couple of short-field drives and later took a 21-14 lead when quarterback Kacey Otto tumbled into the end zone with 5:29 to play in the third quarter. It capped a 76-yard scoring drive that featured Otto’s 51-yard completion to Kortez Weeks midway through the period.

“I feel like we all could have played a little better,” Otto said after passing for 163 yards and rushing for 76 and two scores. “But give them credit. They fought us until the end.”

Hickory Ridge was powered by thousand-yard rusher Jaylen Rudisell, a 212-pound workhorse who bumped and bruised his way for 206 yards and three touchdowns. His 1-yard slam over the left side and into the end zone drew the hosts within 21-20 as the third period expired. “He’s just a great player,” Nixon said, shaking his head before making a quick exit.

West closed the third quarter with Kam Caldwell’s reception to the 45-yard line. Then the Falcons did exactly what Nixon wanted them to — control the clock with their running game, mix in a handful of timely passes and advance into scoring position.

“We needed to make a few stops on defense and put up some points on offense,” junior back Jovon Quarles said after corkscrewing for 88 yards and his sixth touchdown of the season. “But we didn’t do either one.”

Otto spiraled completions to Weeks, Jai Hogue and two to Juwan Houston, steering the Falcons to HR 2-yard line. But the drive stalled after melting more than six minutes off the clock — thanks to successive illegal procedure penalties. On fourth-and-goal from the 12, Otto’s pass intended for Weeks fell incomplete.

“We needed to score some points off that drive,” Otto said. “But penalties happen. That’s football.”

It set the stage for Hickory Ridge’s game-winning drive. Instead of sticking with the hurry-up offense that worked so effectively, the Bulls used seven plays and three minutes to reach the West 43. On a third-and-4 play Reaves took a handoff from QB Greg Waslo and pounded up the middle. He found some space and angled toward the right sideline, advancing as he went. Then suddenly he faked a West defender, sliced back to the middle of the field and sprinted into the end zone. Rudisell’s two-point conversion run closed the scoring.

West’s final charge up the hill fell short when Otto’s fourth-down pass was deflected at the line and fluttered to the ground with 1:16 to go.

“It’s very upsetting, very disappointing,” Quarles said afterward. “This is nowhere near what we came here for. This one really hurts.”