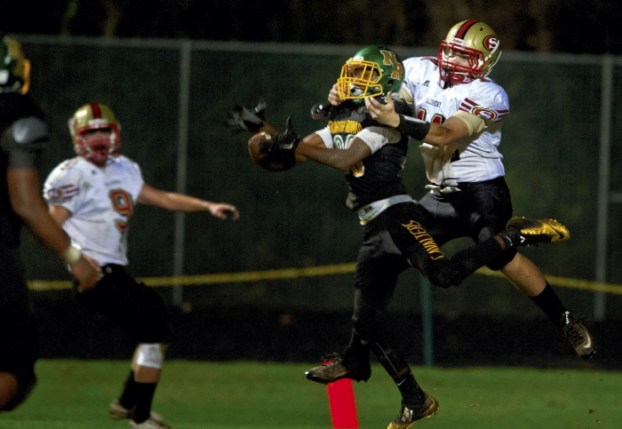 SPENCER — Thomasville’s comeback win against Lexington denied North Rowan a share of the 2A Central Carolina Conference title, but there were times when the Cavaliers played like champions in holding off Salisbury, 21-13, at Eagle Stadium.
The only thing the Cavaliers could control themselves on Friday was finding a way to survive a muddy struggle with their fiercest rival — and they did that.
“This game was the dogfight that we knew it would be,” North defensive end Jake Pritchard said. “With the field conditions, it was almost impossible to cut or turn out there. But we won, and that’s all we could do.”
North (5-6, 4-1 CCC) couldn’t move the chains a single time in the second half against Salisbury’s defense, but the Cavaliers made the one clutch offensive play they had to make.
Crunch-time arrived after Salisbury (3-8, 1-4 CCC), which had nothing to lose, bruised its way to a touchdown with 6:50 remaining in the game to slice a 14-0 North Rowan lead to 14-6.
Salisbury senior Antwond Glenn had a rugged 30-yard carry on that drive on which he plowed through several Cavaliers and smashed a shoulder into another one as he was falling to the ground to send Salisbury fans into a frenzy. Tywun Rivens, mostly a linebacker, also had a furious run in that drive, and when Glenn plunged through the mud to score from the 1, the Hornets were on the scoreboard.
Even after a surprise try for a 2-point conversion failed — kicks on that part of the field were an adventure — Salisbury had all the momentum and plenty of time.
But North had the right answer — a nice kickoff return by Jaden Perry for field position, and a stunning, 52-yard pass play from Corbin Smith to Alonzo Sirleaf for a backbreaking touchdown.
“We knew we needed to do something after Salisbury got that touchdown,” Smith said. “It was hard to run the ball on this field tonight, and we knew after we struggled on our first couple of possessions that we would need to hit some pass plays. We threw more than we usually do.”
On the touchdown, Smith spotted Sirleaf angling from the outside deep down the middle, an identical pattern to a 34-yard gain he and Sirleaf had executed in the first half. Smith fired a strike, and Sirleaf was off to the races.
“We completed that same play in the first half, but they caught me,” Sirleaf said. “The second time they weren’t catching me.”
Jacob Young’s third PAT gave North a 21-6 lead, and North fans relaxed a bit.
Then the teams traded turnovers. An interception by linebacker Omar Lipscomb gave North a chance to win comfortably, but the Cavaliers lost a fumble.
Then Salisbury’s part-time QB, part-time linebacker D.J. Alexander made a terrific individual play. Nearly sacked inside his own 10, he heaved an 88-yard scoring pass to Will Steinman. Steinman had to stop and wait for the ball, but then he outran pursuing defenders to the end zone.
That was Salisbury’s first passing TD of the season. It came with 68 seconds left in the Hornets’ season.
“Guys were coming at me, and I had to scramble,” Alexander said. “One guy had me, but I’ve got long arms and I stuck my arm out there, and he just fell off me. Then I looked up the field and saw Steinman. I was throwing on the run and I knew I was going to take a hit, but I slung it.”
Steinman’s first TD of the season made it 21-13.
Salisbury’s last gasp was an onside kick, but Dakerius Hoosier charged up aggressively to field it, and the Cavaliers had beaten the Hornets for the third time in a row.
The passing game did it for the Cavaliers.
“Teams stack the box against us and dare us to hit some passes,” North coach Hampton said. “Salisbury likes to blitz safeties, and we felt like we’d have opportunities to get vertical. We challenged our guys all week and they really came through when the chances were there.”
Xavier Haley had a 5-yard scoring run for North midway through the first quarter to cap a 55-yard drive.
Then North made it 14-0 when its other quarterback, Josh Ellis, squirmed into the end zone from the 3-yard line on a fourth-and-1 play with 24 seconds left in the first half.
“We feel like we should be able to convert fourth-and-1 85 percent of the time,” Hampton said. “Fourth-and-1 is just a matter of will.”
Salisbury coach Ryan Crowder watched his team’s season end. It was a senior-laden team, but it didn’t get many bounces.
“We fought all the way, even when we were down 21-6 and it was getting late we fought,” Crowder said. “But we had a few breakdowns on defense and we had some guys get cramps that it was tough to play without.”
Alexander, a senior, summed up things for his teammates.
“I’m hurting right now,” he said. “I know we left it all on the field, but it still hurts.”
North will find out its playoff opponent today. The Cavaliers will be the No. 2 seed from the CCC.
North had won a draw and would’ve been the No. 1 seed if Lexington had beaten Thomasville to create a three-way tie for first place in the CCC.

Staff report SALISBURY — Salisbury’s girls tennis team blanked Hendersonville, 6-0, in the third round of the state 2A dual... read more