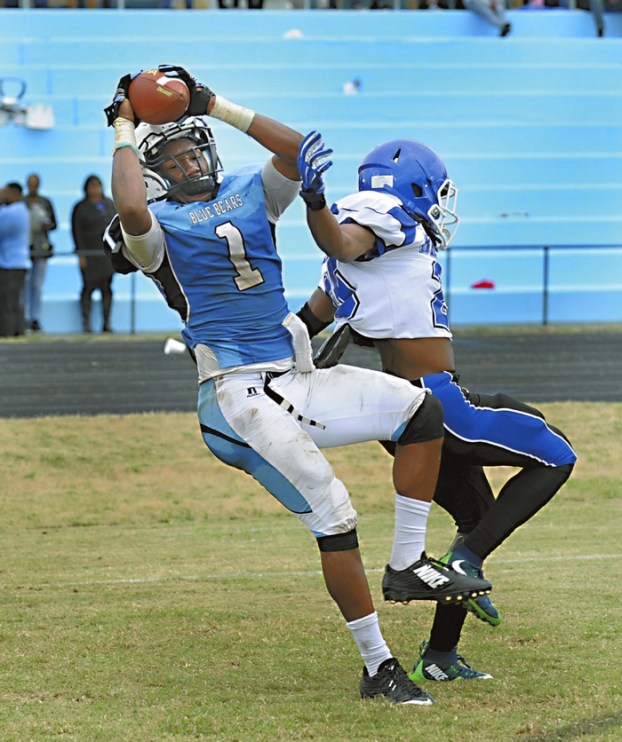 Wayne Hinshaw/for the Salisbury Post ... Livingstone’s Jalen Hendricks (1), shown catching a 10-yard TD pass last Saturday against Fayetteville State, is one of 17 seniors closing out their careers this afternoon at home against J.C. Smith. Game time is 1 p.m.

SALISBURY — Livingstone puts the wraps on another season here this afternoon at Alumni Memorial Stadium hosting the Commemorative Classic against Johnson C. Smith at 1 p.m.

The Blue Bears are hoping to finish in style, as with a win, they can achieve their first winning season in 17 years.

Livingstone is 4-3 overall and 3-3 in the CIAA. The Blue Bears also have two victories over NCAA “non-counters,” or that elusive winning campaign would already be in the books. J.C. Smith comes in 4-5 overall and also 3-3 in the conference.

“We have a huge task in front of us this week,” said Livingstone head coach Daryl Williams. “They have beaten us several years in a row, so we need to play hard and finish on a high note. We’ll be ready to go. It’s the last time our seniors we be playing on this field, so there’s no better way to cap off our season than to win that last game.”

The Blue Bears’ roster lists 17 seniors who are set to make their last appearance. While not all of the seniors play every snap, this has been an outstanding class of Blue Bears.

The senior group includes the notable combination of quarterback Drew Powell and wide receiver Jalen Hendricks, both All-CIAA selections, and undoubtedly, the pair will go down as possibly the most prolific passing tandem in school history.

Powell ranks second in the conference in passing this season at 217 yards per game and is 7th in rushing yards per game at 76.3. He has passed for 12 touchdowns and ran for seven more himself.

Hendricks continues to lead the CIAA in receiving with 7.4 catches and 93 yards per game. Hendricks was an All-American in 2014 and CIAA Offensive Player of the Year. Hendricks has 52 grabs this season, six for TDs.

Key defensive seniors who finish up today include safety Billy Moore, who made the game-saving pass interception in overtime last Saturday, securing a 42-35 win over Fayetteville State.

Defensive tackle Eric Horne, who has clogged up the middle for years, is also a senior, as are starting offensive linemen Shaquelle Sharperson, Michael Green, and Ekanem Ekanem.

In addition to Hendricks, two other receivers, Arthur Bowden and William Tatum, are seniors. Both Bowden and Tatum have had good seasons and Bowden was instrumental in last week’s win with eight catches for 173 yards. Tatum had a 2-yard touchdown pass last week as well.

Kicker Leo Manzo, who concludes his career as one of Livingstone’s all-time leading scorer, is another key senior. In addition to his solid place-kicking, Manzo has also punted and kicked off for the Blue Bears for years. This season, Manzo has scored 29 points and averaged 40 yards per punt.

Livingstone and J.C. Smith, then known as Biddle Institute, played in what is now recognized as the first collegiate football between historically black colleges.

The date was Dec. 27, 1892, and Biddle traveled to Salisbury by horse-drawn wagaon to play on the snow-covered front lawn at Livingstone.

The two teams played two 45-minutes halves and Biddle won, 5-0, although there was some controversy to the victory. According to historians, W.J. Trent scored Livingstone’s only touchdown on a fumble recovery.

Biddle argued that the fumble was recovered out of bounds and the snow covered the field’s markings. The official ruled in Biddle’s favor, allowing the score to remain at 5-0.

The two schools have played 63 more times since that snowy day in 1892, with J.C. Smith winning 41 of the games.

Livingstone dominated the series in the 1990s, winning six straight games between 1994 and 1999.

More recently, J.C. Smith has had the upper hand. The Golden Bulls have won eight of the last nine games, going back to 2006, including the last six games.

Livingstone was in the same situation last year, sitting at 5-4 while J.C. Smith came into the game with a record of 2-7. The Blue Bears needed a win for a winning season, but the Golden Bulls prevailed in Charlotte, 31-14.

“We scored first last year and then turned the ball over several times and they beat us,” said Williams. “I’m excited about this game. J.C. Smith plays extremely hard, so we’ve got be ready to go and meet the challenge.”

“It was a surreal moment,” Williams said of Moore’s game-ending interception. “I have to say that it was one of the best moments of my coaching career.

“It’s sort of a blur, but another thing I was excited about last week was how much our crowd was in the game,” continued Williams. “The crowd chanting, ‘Defense … Defense’ — that was some of the best fan support we’ve had since I’ve been coaching here. To see how important is was to win a Homecoming game, I couldn’t be happier that the team delivered it for them.”

From staff reports The Catawba athletics department has announced a Military Appreciation Day for its football game on Nov. 14... read more