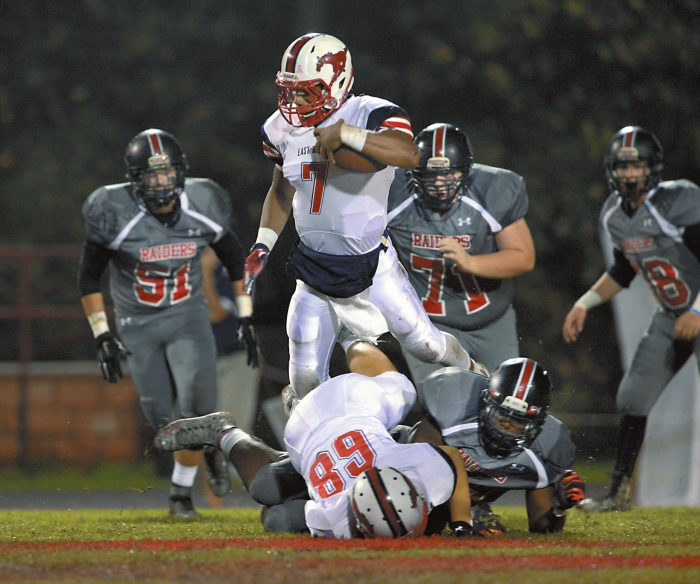 LANDIS — There were no championships, no play-off berths or even winning seasons at stake Friday night at Donnell Stadium, but that did not stop East Rowan and South Rowan from going toe-to-toe for four full quarters.

Mustang offensive weapons Max Wall and Keith Tillman provided the one-two punch needed in the second half as East (3-8, 2-7 SPC) pulled away from the Raiders 34-20. A strong defensive effort led by Wesley Porter’s two interception aided the East cause greatly as well as they expanded a tenuous one-point lead in the third period to finish a frustrating season on a high note.

“It feels good to end the season with a win,” said Wall, a junior who started and played the game at quarterback for the night. “But we are not satisfied and still have a lot of work to do.”

Wall ran the Mustang read-option to near perfection in the game with 19 carries for 176 yards and two scores. He also passed for 117 yards. Wall’s ground performance gave him 1,049 yards for the season and brought him closer to the Mustang career rushing mark. He teamed with sophomore running back Tillman to rack up an impressive 334 yards on the ground.

Tillman had 134 yards of his own to go with a pair of touchdowns, including a back breaking 47-yard sprint in the late third quarter. His first TD came in the second quarter when he ran essentially the same play off left tackle five straight times for 70 yards and a 15-0 lead.

“We just kept running that play until they stopped it but they never did,” Tillman said. “We ran it and ran it until I scored. I am kind of sad our season is over but at least we went out with a win.”

The 15-0 Mustang lead didn’t last long as the host Raiders fired up a senior night crowd with a two touchdown outburst in a span of 13 seconds late in the first half. Quarterback Heath Barringer connected on passes to Tyler Rary and Eli Eason to get the back inside the five, the big halfback Brian Cagler (230 pounds) bulled in from the two with 1:24 left in the half to make it 14-7. The Raiders then caught East off guard with an onside kick recovered by South’s Thomas Borkowski at the Mustang’s 38.

After one run and an unsportsmanlike conduct penalty on East, the Raiders struck again as Barringer lobbed a pass to Rary in the back corner of the end zone from 13 yards out. Brennan Lambert’s extra point made it 15-14 with 1:11 left in the half as South firmly seized momentum.

“We made a strong run there at the end of the half,” said first year Raider coach Daniel Yow whose team ended the season at 0-11, 0-9. “But the worst thing that could have happened to us did when East took the ball and drove it down the field and scored after halftime. That kind of took the wind out of our sails.”

Wall led the Mustangs on an 80-yard drive to open the second half including runs of 22 and 30 yards of his own off the option. He capped the effort with a 5-yard run on a broken play to make it 21-14. “We just came out trying to do everything right, limit the mistakes and get in the end zone, ” Wall said.

South gambled at midfield on the next series when they went for it on fourth and 3 but mis-fired on a pass play. East took over at the 47 and handed it to Tillman who twisted and twirled his way through the defense to quickly make the score 27-14. Porter stopped the next Raider drive with the first of his two second half interceptions to keep the margin the same.

“We were motivated not to lose this game,” Porter said. “There was no way we were going to close out this season with a loss.”

East capped their scoring in the fourth period on a three yard end-around run by Naquis Caldwell to make the score 34-14. South refused to fold as they responded with a 60-yard drive highlighted by a 20-yard pass from Barringer to Rary to close out the scoring for the game.

“If you are going to end the season, it is great to end it on a winning note, ” East Coach Kenneth McClamrock stated. “This season didn’t go the way we wanted it to but our kids showed a lot of resilience and a lot of character. We definitely went out on a high note. Our defense in the second half was especially strong.”

The Raiders’ Yow struck a similar tone despite his team’s winless campaign. “I told our kids we were not going to get better just because we go around the sun one time,” he said. “We have to get in the weight room and do our off-season work. That is what is going to make us better.”