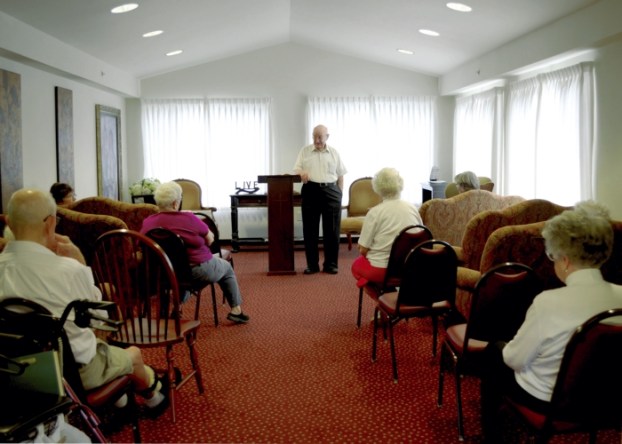 Hugh Fisher/For the Salisbury Post The Rev. Bob Freeman takes prayer requests during the weekly Sunday afternoon service at Oak Park Retirement in Salisbury. The services are organized by volunteers and led by ministers of local churches.

Up and down the hallways of Oak Park Retirement, chimes sounding over the intercom are followed by a reminder that Sunday’s afternoon worship service is about to begin.

And in the elevators, a sign announces the week’s minister – the Rev. Barrie Kirby, pastor of Spencer Presbyterian Church – along with the invitation, “Come, Join in Worshipping the Almighty God.”

Many residents at Oak Park, a retirement community on northwestern outskirts of Salisbury, have transportation to their home churches on Sundays, said the Rev. Bob Freeman, a retired pastor and resident at Oak Park.

For those who don’t, there’s a church home waiting every Sunday afternoon in the third floor chapel.

Freeman said he moved in on January 15, 2010. Not long after, activities director Karen Leonard asked if Freeman would mind taking on the role of inviting local pastors to lead Sunday afternoon worship.

By his calculations, Freeman said, ever since the first service he helped organize in March of 2010, he’s helped bring in pastors for 284 Sunday services led by about 150 different ministers.

But Freeman said he refuses to take credit. A lot of people – volunteers, residents and pastors from around Rowan County – combine to make the event a success, he said.

For Martha Hopkins, an Oak Park resident, the Sunday worship service is an event that brings together residents from different backgrounds.

Many of the ministers Freeman asks to volunteer are ones he’s known from his own career. “I know the vast majority of them,” Freeman said.

Arriving on Sunday for this week’s service, the Rev. Kirby, of Spencer Presbyterian, greeted the residents who’d already gathered early to look through the hymns and talk among themselves.

For this week’s message, the Rev. Kirby used a text out of the fifth chapter of Galatians, on the fruits of the Holy Spirit.

Conversationally, she asked the 12 congregants how many of them had ever planted gardens, and listened as they described the flowers, fruits and vegetables they’d grown.

“Planting them wasn’t so bad! It was gathering and canning them,” one resident said, drawing some laughter from the group.

The service is simple and straightforward. There’s no long sermon, and no collection plate is passed on most Sundays.

There’s a communion service on the first Sunday of each month, and on those Sundays they take up a collection for Rowan Helping Ministries.

That offering is something Freeman said connected the small congregation at Oak Park to the earliest Christians, who gave back to those in need.

Kirby, who’s led worship at Oak Park twice previously, said ministering to the residents is a unique opportunity – especially the opportunity to bring a message to residents at this stage of life, considering their experiences.

There’s also a personal connection: Kirby’s mother-in-law is a resident there. She and her husband, who’s also a pastor, have led services at Oak Park together in the past.

Because of this, Kirby said, coming to Oak Park for afternoon worship feels like being among friends. “There are familiar faces, and that makes it a rewarding experience,” she said.

Juanita Johnson and her husband, Marvin, have lived at Oak Park for about five years. Juanita is one of the volunteers who’s helped prepare communion on the first Sunday of the month.

“We have a good crowd most every Sunday,” Johnson said.

Erma Scarlette, who’s lived at Oak Park for almost four years, said it’s good for those who don’t have reliable transportation to know they have a Sunday service to attend.

“It’s nice to have this, to come face to face with your faith,” Scarlette said. “It lifts your spirits a bit, and gives you something to look forward to.”

The pastors of nearby Enon Baptist Church have been very involved in Oak Park’s ministries, Freeman said.

“I did some long-term weekly Bible studies there,” Mobley said. “I really enjoyed getting to know the residents, and being able to help them express their faith.

Mobley said the relaxed atmosphere gives those Sunday afternoon services a feeling of home. “And everybody is very appreciative of the pastors who come in,” Mobley said.

The occasional Bible studies are also a chance to help Oak Park residents live out their faith through scriptures, Mobley said.

“The one I remember the most was going chapter-by-chapter through the Gospel of Mark,” Mobley said. “We would read a key passage, sometimes we’d read the whole chapter, and then do a bit of historical background, looking at the theology of the text.”

“For them, it’s a chance to get the residents to talk about their lives, and how they can exercise their faith on a day-to-day basis,” Mobley said.

Freeman said he’s worked to bring in as many pastors from local churches as possible. He said most of the ministers who volunteer come from denominational churches, “because most of our residents, when they attended church, attended one of the denominations.”

For that reason, Freeman also said he’s made a special effort to invite pastors from as many denominations as possible.

The Rev. Carolyn Bratton, pastor at Moore’s Chapel AME Zion Church, has led worship at Oak Park three times in recent years. “I tell you, it was really a blessing to be able to bring the service to them, and to see the joy on their faces, especially when they join in singing the hymns with you,” Bratton said.

She said her husband, the Rev. Nathan Bratton, pastor of Ardis Chapel AME Zion in Salisbury, has also led the afternoon service at Oak Park, and had been there just a few weeks ago.

Bratton said that ministering at Oak Park “can be as much a blessing for the pastors as for the congregation.”

“Knowing that (the residents) might not be able to get out and go like they would like to, being able to bring the service to them is wonderful,” Bratton said.

What’s more, Freeman said, when times are troubled, the weekly services are a chance to draw together in prayer for those who are sick, or whose family members are in need of prayer.

“There was a lady who moved here about six months ago,” Freeman said. “About four months ago, she was diagnosed with brain cancer. She was coming here every Sunday. The last Sunday, she asked for special prayer.”

That was the last Sunday this resident was able to attend, Freeman said. Before long, she had passed away. Even so, Freeman said he believed that she had felt peace from her neighbors’ prayers.

Not only the residents, but visitors to Oak Park are welcome at the weekly services, which Freeman said he’s glad to help support – to help bring the word of God, and a time of fellowship, to the lives of those in his community.