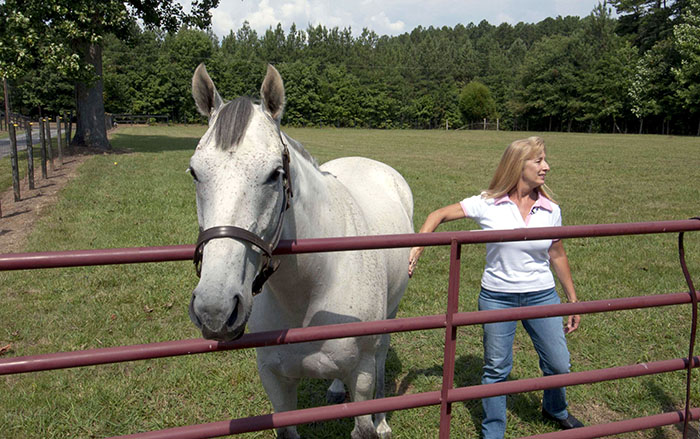 Ann Moulton with her horse Blue — registered as Gentleman Breck — in 2014. Blue is a great-great grandson of the American thoroughbred and Triple Crown winner Secretariat. It turns out he’s also related to this year’s grand slam winner American Pharoah. File photo by Jon C. Lakey/Salisbury Post

SALISBURY — Blue is a lot of horse, but he has some pretty big bloodlines to live up to.

Owned by Ann and Dave Moulton, who live on the Double M Farm off Price Road in eastern Rowan County, Blue is the great-great grandson of Secretariat. You know Secretariat. He won the Triple Crown in 1973, setting track records in the Kentucky Derby and Preakness and a world record at the Belmont Stakes.

But it turns out Blue — at times, Ann Moulton affectionately calls him “Knothead” — may have an even closer connection to the new horse of the century, American Pharoah.

Even before Saturday, American Pharoah had earned hall-of-fame status by being the first horse to win the Triple Crown since 1978. Add in the Breeders’ Cup Classic win, and American Pharoah’s future stud fees might be equal to the cost of a small mansion.

But what does an 8-year-old dapple-gray gelding roaming a Rowan County pasture have to do with the most famous horse in the world?

Follow the family tree closely. Blue’s sire (father) was a horse named Yankee Gentleman, an accomplished runner in Louisiana who collected $2.7 million in earnings before going to stud.

Blue is really the stable name for Ann Moulton’s horse. He is registered with The Jockey Club as “Gentleman Breck,” which refers to his sire and also the name of Breck High School in Louisville, Ky. His original owner, Patricia Skaggs, attended that high school.

The uncle connection comes in because Littleprincessemma is the dam of American Pharoah.

Ann Moulton bought Blue in 2011 from a horse farm in South Carolina without realizing his connection to Secretariat. When she brought him back to the Moultons’ Rowan County farm, she turned up his lip one day to see if he had a thoroughbred’s tattoo.

He did, and the number led her to The Jockey Club registration for Gentleman Breck. It turned out Blue was the grandson of Storm Cat, That horse was a grandson of Secretariat and the father of Yankee Gentleman.

Though a horse of a different color, Blue has the intimidating build of Secretariat. At 16.2 hands, he is the same height, and the stout, muscular gelding is now approaching 1,300 pounds, Ann reports.

It should be mentioned that Secretariat has many relatives. His life in stud led to 653 foals, and other famous racing descendants included A.P. Indy, Gone West and Smarty Jones.

Not until Saturday’s Breeders’ Cup Classic and a telephone call from her friend, Michelle, did Ann Moulton realize Blue also had a close connection to American Pharoah.

Ann was headed to church Saturday before the Breeders’ Cup Classic race when Michelle called and asked for the name of Blue’s father. Michelle was sure it was Yankee Gentleman, and she told Ann she had seen that name on television at the front of American Pharoah’s stall.

Ann went on line and searched for the name of American Pharoah’s parents. His sire was Pioneer of the Nile; his dam, Littleprincessemma. In one more leap, Ann learned that Littleprincessemma’s dad was Yankee Gentleman.

She couldn’t believe it. Blue was American Pharoah’s not-so-rich uncle.

Blue (Gentleman Breck) was born April 25, 2007, in Kentucky and nominated for the Breeders’ Cup as a 2-year-old, but he never raced, except for match races.

Ann theorizes when Blue’s racing career didn’t pan out, he was a stud for awhile, but she has no documentation to back that up. He was castrated somewhere along the line, before or after Skaggs sold him to the S.C. farm.

A horsewoman all her life, Ann Moulton has always said “a God thing” led her to Blue. The fact he can claim a connection to racing royalty is just a bonus.

“This is God,” she says. “I’ve had a lot of people tell me I have to write a little book or novel about Blue.”

Ann now has a goal of traveling to the farm in Kentucky where American Pharoah will be earning his exorbitant stud fees, just to view the famous horse and look for similarities to her boy Blue.

“He’s coming along well in the saddle,” she says. “He amazes me. When people come to see him, the first thing they say is, ‘This horse loves you.’ It makes my heart soar.”

On this particular day, Ann says, Blue is more red and black than blue and gray. He has been wallowing in the mud.

Longtime U.S. Rep. Howard Coble dies; ‘He had a…