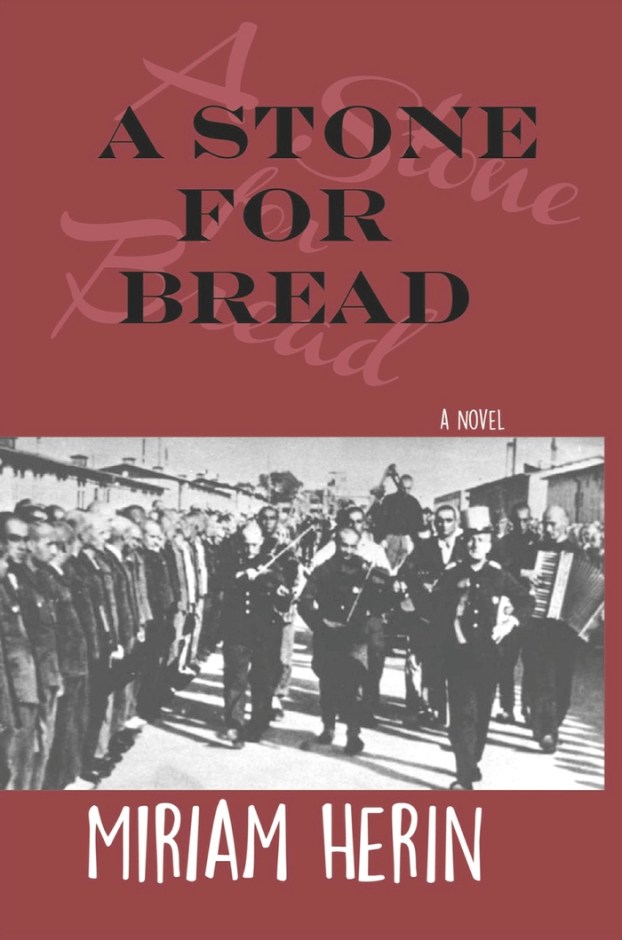 Miriam Herrin will sign and discuss her book,"A Stone for Bread" on Saturday, Nov. 14, 3-5 p.m. at Literary Bookpost.

The cover of “A Stone for Bread” does no favors for the content of the novel by Miriam Herin.

This is not a novel of concentration camps, though that is part of the story. This novel is about obligation, honesty, unrealized potential and the search for self. Herin creates a vivid picture of a man struggling with his past, trying to understand how that past and his desire to do the right thing ruined him.

Henry Beam, the picture of a washed up academic, had passion and fervor, but for the wrong cause. Raised poorly and poor in a shack in rural North Carolina, Henry was supposed to overcome his miserable beginnings with his facile brain.

But there’s an aimlessness to Henry, a restlessness. His mind is perhaps too active, always seeking for something just out of reach. Something indefinable. He’s a passionate youth looking for his muse, his cause.

René is the other part of the novel. René, who suffers from attacks by the ange noir, or black angel, is likely bipolar, but no one in his 1917 childhood in France knew what that was. A third person narrator sees through Rene’s eyes and his fears and fantasies to tell his story.

Herin constructs the novel with a modern frame based on a thin premise. Scott, a young man who works for UNC-TV, is assigned to do a documentary on Beam, a long forgotten, controversial poet who has just published after decades of silence.

The author introduces Rachel as Scott’s English major graduate student friend. It is Rachel whose compassion allows Henry to share secrets he’s hidden for most of his life.

The machinations of the taping are superfluous. Henry’s story and René’s story are both compelling enough to fill the novel and keep the reader dedicated to seeing the book through to the end.

Henry pours out his secret history to Rachel, his time in France in the 1950s, a pawn for a struggling resistance movement. Henry is an aimless 23-year-old who’s supposed to be studying poetry in France, possibly writing a novel. Instead, he becomes the stereotypical disaffected American, wasting his time and money in cafés.

He hangs out with a stringer for the Associated Press, Bert Yeager, and survives on a meager student stipend. He says little, drinks much and falls head-over-heels for Eugénie, whom he meets at a rally for Renard Marotte, a man campaigning against the establishment and communisum.

Henry doesn’t feel passionately about much but Eugénie, so as he gets caught up in rallies and demonstrations for Marcotte, it’s mainly because of her.

René begins the novel and has fewer chapters than Henry, although his story is arguably more compelling. René’s  earliest memory is of burying a grenade in the yard, only to see his brother blown to bits when he hits it. At 4, René does not know what a grenade is. The scene haunts him for years, until he learns to forget by immersing himself in books. He is intelligent, does well in school, but still has visits from the ange noir, who drives the boy with the piercing blue eyes mad and drains him physically.

His once-dedicated teacher gives him an undeserved failing grade when Rene says he wants to become a priest.

But in seminary, Rene continues to struggle with a growing desire for one of the other young seminarians and his faith burning out like fireworks. It seems René has an astounding mind, but cannot find anywhere to belong.

Aged Henry, in his own world in a rundown house in the woods outside Chapel Hill, slowly plays out his story, but won’t answer direct questions about the collection of poems, “Stones for Bread,” that ruined his reputation. Henry claims he was given the poems, but critics say he stole them and is a plagiarist.

The reader may decipher the truth about the poems, but a gut-wrenching revelation changes the entire picture.

Many chapters are spent with Henry telling his story to Rachel, again with a third person narrator who sees only through Henry’s eyes.

Truly, Henry comes across as a boring, naive child in much of the story, but his narrative is compelling enough to stave off the lassitude of his young life.

Ren’s story wants more telling. How did he survive after Mauthausen, the camp in Austria where he suffered unspeakable treatment and horrifying sights and sounds?

By the time the stories begin to wrap up, Rachel comes in handy as the keeper of the stories, the searcher for those lost fragments.

“A Stone For Bread” is a strong novel that has no moral fist-pounding to justify its existence. Instead, the message is more subtle.

Whoever we are, whatever we do, it has an impact. We never know how far it will go or who will feel it. We leave a legacy, if we’ve lived at all. And we never know who will discover that legacy, if it is ever known at all.

Being the local food and horticulture agent for Rowan County, I am privileged to learn about new things happening within... read more