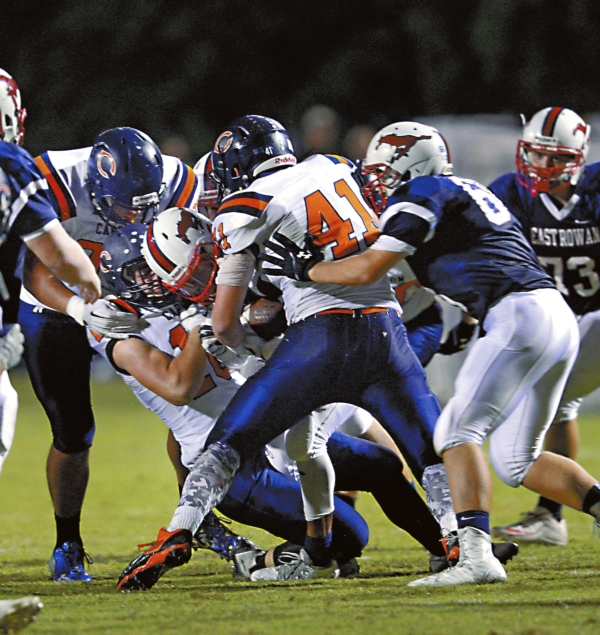 CHINA GROVE — At 6-foot-2, 188 pounds, Carson senior Logan Parker looks like the perfect high school tight end.
But Carson rarely employs a tight end, so coach Joe Pinyan had to search for a different role for Parker. He found it. While he’s undersized for the position, Parker has developed into a fine defensive tackle for the Cougars.
“I love defense, and it’s been a great transition for me,” Parker said. “I’m seeing more action and I’m contributing more to the team than I ever have. Defense is where I need to be.”
Pinyan remembers Parker dropping a wide-open pass last season when he was still a receiver. Now the only thing Parker is dropping are opposing running backs and quarterbacks.
“He’s a strong kid with pretty impressive numbers in the weight room,” Pinyan said. “He’s also an intelligent guy and a good athlete. Friday, in a really big game for this program, he came through.”
Parker, who has competed in the 200, 400 and hurdles for Carson’s track team, peaked in the Cougars’ 24-6 South Piedmont Conference win against stout Hickory Ridge. It was an upset that was, depending on whom you talk to, surprising, stunning or shocking.
Parker made 12 tackles, four for loss, and was Carson’s co-defensive player of the week. He shared the award with linebacker Ryan Bearden (nine tackles, four tackles for loss, forced fumble, fumble recovery), a frequent player of the week.
“We came into the game with the mindset that we weren’t going to take anything from Hickory Ridge,” explained Parker, who still wears the No. 18 jersey of a receiver. “We hit them in the mouth.”
Pinyan and Parker are certain Carson’s diligent week of preparation keyed the victory. It was a lousy-weather week, but Carson practiced outside every day, splashing through standing water, rather than retreating to the warmth of the gym.
“The weather was actually a blast,” Parker said. “We floundered around in the puddles a little bit, but we made the best of it. We got our work done. We were ready to play on Friday.”
Friday was Senior Night in China Grove. That added more emotion to the Cougars’ effort.
“We really made the Senior Night thing a big deal all week and we really tried to lift up our seniors,” Pinyan said. “The staff had a good game plan. The kids went out and executed it. Hickory Ridge is really good. They’ve got a smart quarterback and several good running backs. They gashed us right up the middle a few times, but for the most part, we contained them.”
Carson led, 17-6, at halftime. The Cougars sat attentively, waiting for the usual halftime adjustments. There weren’t any to be made.
“Coach just looked at us,” Parker said. “He said, ‘Hey, you’re playing great. Keep the intensity up.'”
Pinyan saved his best speech for the coaching staff. “The way our guys have played, we can’t let them lose this game.'” he told them.
Carson (6-4, 4-4 SPC) didn’t. The Cougars finished off the upset. Co-offensive players of the week Owen White and Austin Lear had big games. Feisty fullback Dylan Livengood barreled past 1,000 yards for his career. Brandon Huneycutt surpassed 1,000 receiving yards for his career. Austin Cain, a backup spur, made repeated tackles on special teams. Parker, Bearden and Matt Beaver (eight tackles) kept stopping Ragin’ Bulls in the backfield.
“This game was important to all of us,” Parker said. “There were doubters who didn’t think we belonged in the playoffs. We showed people we deserve to be in there. This was the best game we’ve played all year. Offense, defense and special teams — we put it all together.”
Pinyan wasn’t in a bragging mood. You’re only as good as your next game, and he’s concerned about going to Cox Mill for the Chargers’ Senior Night this Friday.
Still, the win against Hickory Ridge is one he’ll treasure. Pinyan made a couple of David vs. Goliath references, and the Cougars did slay one of the SPC’s giants.
“We lost an awful lot of offense when Brandon Sloop and Darren Isom walked across that stage last spring, and we were picked to finish seventh or eighth in the SPC,” Pinyan said. “Our guys have had a pretty good season.”