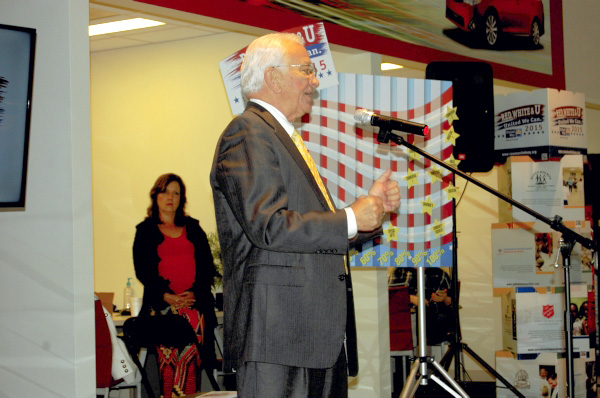 The United Way fundraising campaign is not looking too hot.

The Rowan County United Way held its fourth and last report meeting at Cloninger Ford of Salisbury on Wednesday.

“I’ll be quite honest. We should be about 90 percent of goal at this point,” Penny Greer-Link, the general campaign chairperson, said to the crowd.

Greer-Link said the agencies are working hard to raise funds, and there are still campaigns that have yet to be completed.

Paul Fisher, chairman emeritus, also spoke about the need for the United Way’s services in the community.

“I’m a little bit saddened that we are so far away from our goal,” he said.

Fisher said when the United Way wins as a team, the county wins as a whole.

To continue with the “Red, White and U” American spirit theme, some of the members of the Rowan Little League world champion softball team, along with coach Steve Yang, attended the event.

Yang talked about how much the win meant to the community and the many thank yous he and the team members have received.

“We never thought that this would impact our community in such a positive way,” Yang said.

The Sacred Heart Catholic School Varsity Cheerleaders also pumped up the crowd with a few cheers.

Names were drawn for the chance to win a free car. Judy Summitt from Rowan County government, Tammy Hill from Park Sterling Bank and Chris Messick from Innospec will all advance to the next stage of the drawing.

Steve Fisher, president of the board of directors, said he is encouraged by the campaigns that have come in.

“We need to get the rest of those campaigns in and make sure everyone that is finishing their campaign finishes strong,” he said.

The United Way campaign finale will be Nov. 13 at the YMCA.