Longtime U.S. Rep. Howard Coble dies; ‘He had a heart for people’ 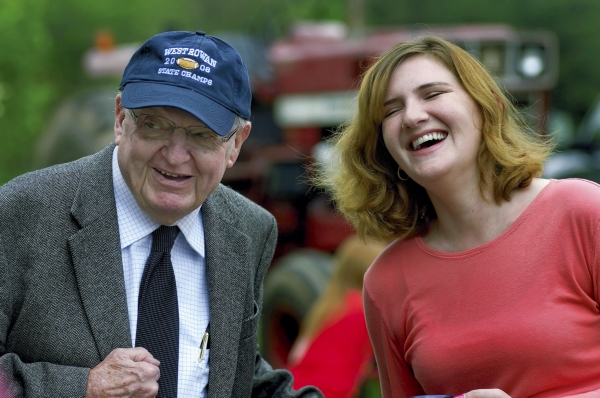 Former U.S. Rep. Howard Coble, who died late on Election Night Tuesday, was a lot of things in his life.

A principled conservative. An attorney. A bureaucrat, a Coast Guard veteran. A history buff. An avid tennis player. A confirmed bachelor. A lover of straw hats and loud sport jackets.

But the thing Coble might best be remembered for was his downright friendliness and his efforts to work for constituents in the 6th House District — a seat he doggedly held on to for three decades and only gave up with his retirement in 2014.

“Of course, everyone knew Howard,” said Fred Steen, the former Landis mayor who is now legislative director for Gov. Pat McCrory. “He was like their favorite uncle, and he was the kind of guy who loved serving the people of the 6th District.

Cancer took Coble’s life at the age of 84. He was living in an assisted-living facility in Greensboro on Social Security and his Coast Guard retirement. He was one of the few congressman who turned down his hefty federal pension — one that would have been considerable for Coble because of his many years in office.

“He kidded about that not being a smart decision, but it was the right one,” said Harry Welch, whose wife, Terri, was Coble’s district office manager in Rowan County for 18 years.

Terri Welch said she was “heartbroken at the loss of such a servant of the people, such an old-fashioned Southern gentleman, and such a warm, genuine man.”

Welch said she took great pride in running the Rowan County office for Coble and accompanying him around the district.

“He was always happy to meet the people, visit in the local businesses and see what was working for the people,” she said. “He was equally concerned in those things that weren’t working — loss of our local businesses that had been the foundation of small business, loss of our farms and agriculture and the needs of our military and veterans.”

Welch said Coble truly was a man of the people. He desired fairness, integrity  and honesty and conservative government spending, Terri Welch added.

Terry Osborne, general manager for the Rowan/Kannapoilis ABC Board, was one of Coble’s closest friends in Rowan County, Between 1981 and 1993, when he was teaching at West Rowan High School, Osborne took students in his civics and history classes to Washington, D.C., and he soon made a visit to Coble’s office part of the schedule.

“No one was as personable or genuine,” Osborne said. “He was there for the right reasons. He truly was a public servant.

“The people he helped and assisted in Rowan County was phenomenal. He had a wonderful, wonderful staff, like no one had ever seen before.”

Osborne said Coble was like a celebrity at The Monocle, a popular Washington restaurant. And when you visited his office for the first time, Coble encouraged you to sit in the high-backed chair behind his desk.

In the background was a good view of the Capitol dome.

Osborne said he and John Holshouser of Salisbury were among a group that took Coble to lunch only recently. “It was non-stop, the people coming up,” Osborne said. “It was phenomenal. He told us over and over, ‘Guys, you don’t know how much fun this has been.'”

Jake Alexander, a member of the N.C. Department of Transportation board, also knew Coble well and said he was one of the most charming public figures he has ever known.

“As many others did, I loved the man,”  Alexander said from Raleigh Wednesday. “… Both sides of the aisle will tell you he was  a gentlemen, a passionate defender of what he believed in, and his constituency sent him back election after election because of that.”

Osborne said the job drove Coble. And people often were impressed by his ability to remember their names or things about their families as he toured through the 6th District.

“He was the real deal,” Osborne said, “and he just loved people he knew. It meant so much for him to establish relationships asnd friendships.”

Coble was born March 18, 1931, in Greensboro. After high school, he attended Appalachian State University, where he earned a degree in history. He later received his law degree from the University of North Carolina at Chapel Hill.

Coble served in the N.C. General Assembly, was an assistant U.S. Attorney for North Carolina’s Middle District, secretary of the N.C. Department of Revenue and practiced law at the Greensboro firm of Turner, Enochs and Sparrow.

After being elected to Congress Nov. 6 1984, he served on a wide-ranging number of committees, including the Intellectual Property Subcommittee. Coble gained national attention as his committee oversaw parts of the music industry’s bout with the music-streaming service Napster, accused of stealing music and distributing it for free to consumers.

Coble initially may not have been well-versed in digital music streaming, but he learned quickly.

In Congress, he also served on committees dealing with fisheries, narcotics, textiles and the environment.

Following Coble’s death, he drew a wide breadth of praise from current members of Congress.

All of Rowan County’s U.S. representatives in Congress had a kind word to add about Coble.

Rep. Alma Adams, D-12, posted on Twitter that Coble was the epitome of a public servant and was said to have the best constituent services of all time.

“As a freshman member of Congress, I often look to Coble’s method of running his office, in serving my constituents – he was steadfast, attentive, and always put them first,” Adams said.

U.S. Sen. Richard Burr said Coble was a friend, colleague and mentor. Although they served in separate bodies of Congress for a time, Burr and Coble were both in the U.S. House of Representatives from 1995 to 2005 — when Burr represented the 5th Congressional District.

“Howard will be missed but never forgotten by all who called him friend,” Burr said in an emailed statement. It’s a sad day for North Carolina, but it is a joyous occasion that Howard is once again with his parents he loved so much.”

Boundaries of the 6th Congressional District have changed over time. At one point, the district stretched from Southern Pines at its southern end, to Guilford and Alamance counties in the north and Kannapolis and Cleveland in the west.

Much of what was Coble’s 6th District portion in Rowan now sits within the 8th District of Rep. Richard Hudson, R-N.C.. Hudson said Coble served North Carolina with honor, integrity and kindness.

“He never met a stranger and set the standard for constituent service,” Hudson said. “We join North Carolina in mourning the loss of a true gentleman and faithful public servant,.”

Steen, the legislative director for the governor, said Coble always wanted to visit Landis when Steen was mayor. Steen looked forward to those visits and always tried to clear his schedule so he could spend time with the congressman.

“We made sure we had something for him to do,” Steen said.

Coble also had a fascination with the mascot names of area high schools, because he often used it as a conversation starter with constituents. His ability to relate to people was much like late Agriculture Commissioner Jim Graham, Steen said.

“We’re missing that breed of politicians,” Steen said. “… A young person getting ready to be a politician – they need to follow his example.