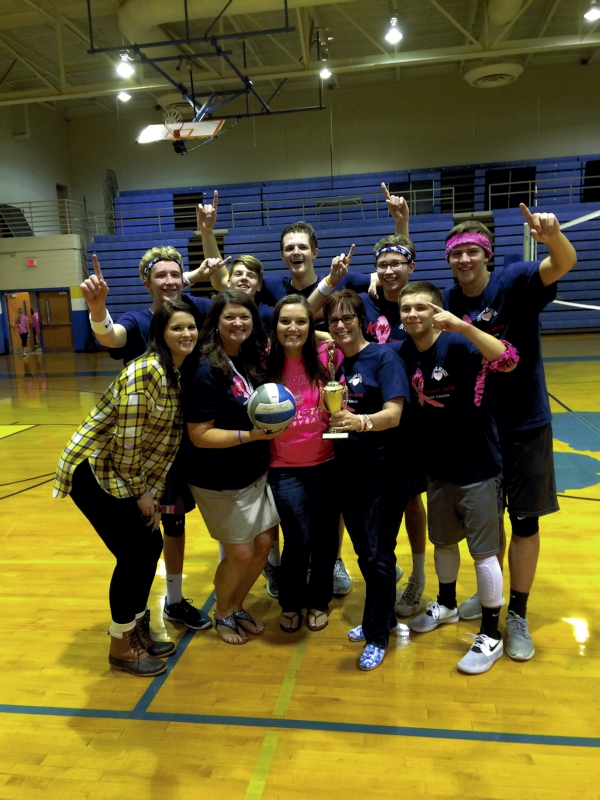 By McKenzie Collins and Emily Daubenmire

For the last eight years, male students representing all Cabarrus County High Schools have teamed up to play in the King of the Court volleyball tournament to raise awareness and funding for families that have been affected by Breast Cancer.

This year the event’s founder, Michael Landers, met with East Rowan Principal Julie Erdie and Student Leadership Team Advisor Wendy Fontenot in hopes of sharing this worthwhile venture and bring it to Rowan County in the future. As a result of that meeting, a team was invited to participate in their event in order to get a first-hand feel of how it all works.

Who could have guessed the six-man team of Ben Rollins, Sawyer Russell, Tanner McNabb, Corbin Elliot, Cody Meadows and Addison Fry would end up winning the tournament and bringing the trophy back home to East Rowan?

Marian Walters, a development officer for Novant Health Foundation at Rowan Medical Center in Salisbury, also met with Landers, Erdie and Fontenot this summer and attended the event to show her support.

“I was so excited to work with Mrs. Erdie and her team to make their first experience of King of the Court a success,” Walters said. “I have been part of King of the Court for three years now and have seen the impact it has on the community at various levels — from the students who plan the event, players, the spectators, to the families who benefit from the fundraiser. It’s a win-win for everyone!  I look forward to watching this event grow here in Rowan County and to have Novant Health Rowan Medical Center be part of that growth. There is so much potential for these young men and women to make a significant difference in the community they live in.”

Fontenot was very impressed with the efforts of Landers and Mt. Pleasant High School. She plans to work with the Student Leadership Team to bring this event to East Rowan next fall and hopes to have other Rowan county high schools join in the efforts to raise money for such a worthwhile cause.