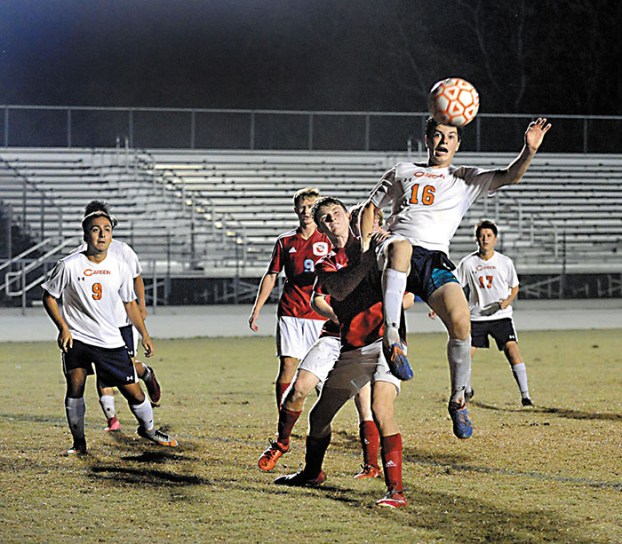 Carson's Cole Howard 16 scored a goal on a header into the goal. photo by Wayne Hinshaw, for the Salisbury Post

The Cougars launched yet another pursuit of the 3A state title Thursday night — with a different approach this postseason.

“In the past two years we’ve always had the state championship in mind, right from the start,” senior halfback Ricky Maldonado said after Carson gained a soggy, 5-1 first-round victory against North Iredell. “And we were stopped. Last year, we thought we had it with the No. 4 seed. That was a big surprise to go out in the second round. We know how that feels and we don’t want to feel that way again.”

Maldonado did his part to keep Carson (19-1) well-grounded and focused, especially after the Cougars found themselves enmeshed in a tougher-than-expected match. He scored a pair of second-half goals, just 57 seconds apart, to crack open a 2-1 game and help Carson earn a second-round date with South Iredell.

“It was 2-1 for six minutes and that six minutes was nerve-wracking,” said first-year coach Ryann Winchip. “But it kind of lit a fire under our butts. And once we got one, it was like, ‘Ok, we can smell blood now.'”

Carson played the first half without starters Brandon Flores and Pedro Perez — both sidelined by “coach’s decision.” That meant Maldonado and senior Colton Correll had to become go-to players and they flourished. Correll opened the scoring before the match was four-minutes old when he took a feed from Maldonado some 40 yards from the cage, sliced through the NI defense and curled a shot past sophomore keeper Scout Hix. It was a hustle play that netted his 21st goal of the season.

“Whenever someone like Brandon isn’t on the field it has a big impact,” said Correll. “But one player doesn’t make a team. Without him we had to keep playing our game, keep our heads on straight and execute well.”

Winchip threw Correll a verbal bouquet afterward. “He uses his body better than anyone else I’ve ever seen in high school soccer,” the coach said. “He shoulders people off, turns on the speed and goes to the goal. He’s having an all-state calibre season.”

The Cougars went up 2-0 at the 10-minute mark when defender Cole Howard charged the net and headed a corner kick by Irving Flores into the right side.

“I always make that run to the front post,” Howard said after scoring his fourth goal. “Sometimes I get the ball, sometimes I don’t. But I still make that run, even it’s just to free up other guys.”

Then came a Carson lull. The Cougars played a lot of kickball, sending passes to no one in particular and never mounting much of an attack the rest of the first half. North (10-13) finally capitalized 13 minutes into the second half when senior Curtis Fox pumped a high shot from the left side that eluded CHS keeper Grayson Owens. “Honestly,” Howard said, “that was my fault. They took the ball away from me and sent an over-the-top through ball. But after that, we really woke up.”

The alarm first sounded with 20:58 remaining when Maldonado took a pass from Flores and and ripped a shot into the upper right corner.”I talk to Brandon all the time,” Maldonado said. “I know when he’s going to make a run and he knows when I gonna make one.”

Before the crowd settled down, Maldonado struck again, this time accepting a chip pass from Correll and depositing a hard shot past Hix. “(Correll) dragged the defender with him,” he explained. “That freed me. I wasn’t expecting the chip, but thought it was the best option.”

Teammate Khalid Myers closed the scoring 10 minutes later on a sharp-angle grounder that Hix squeezed over the line, giving the Cougars three second-half goals in less than 11 minutes. It set off a well-contained celebration.

“It’s a different mindset this year,” Correll said. “We know we’ve got to take this one game at a time. It’s the only way. We know nothing is given to us and every match could be it.”

NOTES: Carson, which peppered 23 shots at North’s goal, hopes to host South Iredell on Saturday, weather permitting. No start time has been announced. … Owen was credited with five saves. Hix had 10. … Flores has 26 goals this season and 115 in an illustrious career.