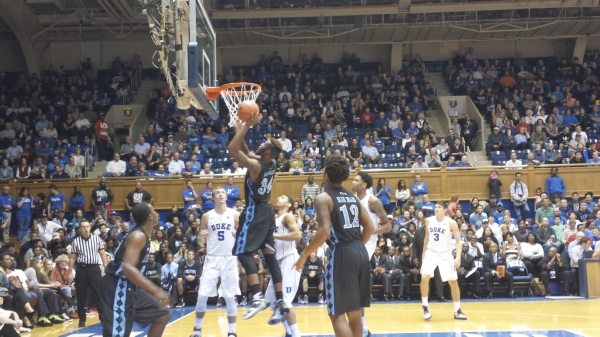 DURHAM — Youth was the story of the night as freshman Luke Kennard hit 6-of-11 three-point attempts on his way to a game-high 25 points as fifth-ranked Duke defeated NCAA Division II Livingstone, 119-54, in its final exhibition game on Wednesday evening at Cameron Indoor Stadium.

Duke took advantage of Livingstone miscues early, forcing the Blue Bears into four turnovers before the first media timeout, thanks in large part to a tenacious full-court press.

A pair of threes, hit by sophomore Grayson Allen and Kennard gave the Blue Devils a 12-4 lead heading into the under 16.

As the team continued to roll, the Blue Devils brought new life to the crowd as Allen swiped the inbound pass and found Jeter on a fast break for the alley-oop slam to give Duke a 24-7 lead with 12:50 remaining in the half.

Duke’s advantage in the turnover battle proved to be key in the first half, outscoring Livingstone 24-5 off of turnovers and 16-2 on fast break points while forcing 18 turnovers.

“Duke does a great job of taking you out of what you want to do offensively,” said Livingstone head coach James Stinson.

“They also minimize their own turnovers while creating some for themselves,” continued Stinson. “We knew that coming into the game.”

Ingram and Allen paced the Blue Devils in scoring in the first half, shooting a combined 8-of-16 (50.0) from the field and 11-of-13 (84.6) from the free throw line en route to scoring 14 points apiece in the opening half.

Kennard provided the spark for the Blue Devils, opening the half by hitting consecutive three pointers. The rookie out of Franklin, Ohio, erupted for 14 points over the final 20 minutes, fueled by a 4-of-6 shooting performance behind the arc.

The Blue Devils dominated inside early and often, outscoring the Blue Bears 54-24 in the paint over the course of the game.

The six freshmen on the squad saw significant playing time against the Blue Bears, accounting for 128 of the team’s 200 minutes (64.0 percent).

Ramel Belfield led Livingstone with 14 points off of the bench, followed by nine points from Cordero Holt.

The Blue Bears shot just 29 percent from the floor for the game, making 21 of 73 shots from the field.

The missed shots did result in 17 offensive rebounds for the Blue Bears.

“We’re scrappy,” said Stinson. “But the way we shot it tonight, we should be able to get some of those misses.”

Livingstone misfired on 24 of its 30 3-point field goal attempts.

Duke shot 38 free throws in the game, making 26. Livingstone was six-for-seven at the foul line.

In addition to Holt, the starters for Livingstone were Mark Johnson at forward, and three guards — Juwan Cole, Valworth Jones and Jimmy Wilson.

The Blues Bears’ starters combined for only 22  points.

Over its two exhibition games, the Blue Devils posted a winning margin of 54.5 points.

The Blue Devils will officially kick off the 2015-16 season next Friday, Nov. 13 by hosting Siena at 7:00 p.m. The contest against the Saints will be televised on ESPNU.

Livingstone opens its regular season on Nov. 13 as well, taking on the University of Charleston (W.Va.) in Winston-Salem, in the CIAA/MEC Basketball Challenge.