Is this the debate Republicans want? 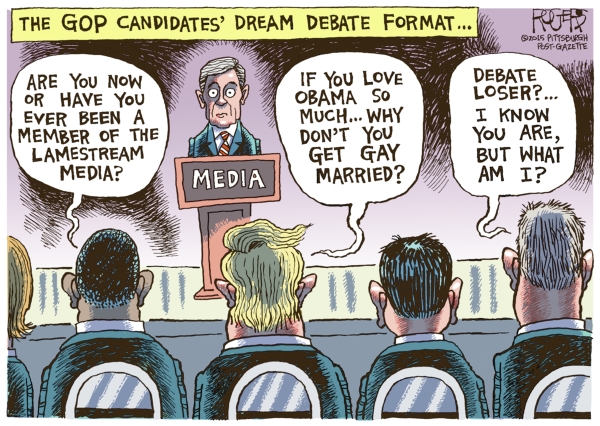 The Republican presidential candidates were infuriated by last week’s CNBC debate. They felt the tone was hostile, the questions were “gotcha” and the whole thing reeked of liberal media bias. As a result, the candidates have joined forces to craft a new debate format, one that will better and more fairly allow them to expound their views to the American people. Here’s an advance look at the result:

Hannity: Hi, I’m Sean Hannity and these are my fellow moderators, Ann Coulter and Rush Limbaugh. Let’s get right to it. This first question calls for a show of hands. If you think America is the greatest country in the entire universe, raise your hand. (All hands go up except for Dr. Ben Carson’s.)

Hannity: I’m sorry, Doctor. Could you please speak up?

Carson: I said there’s a problem with the question. I would say America is the greatest country in the entire universe and any parallel universes. (All hands go up. Applause.)

Coulter: Mr. Trump, you have said you will build a wall to keep Mexican illegals out of the country and that you will make the Mexican government pay for it. The obvious question is: How high do you think that wall should be?

Trump: Good question, Ann. Here’s the good news: Mexicans are not very tall. That’s why you don’t see any in the NBA. That means a 6-, 7-foot wall should do the job.

Coulter: I’m sorry, Governor, we need to move on. (Reince Priebus, chairman of the Republican National Committee, walks hurriedly on stage and whispers in Coulter’s ear.) My deepest apologies, Governor, I didn’t mean to interrupt.

Huckabee: I was just going to add that this is yet another example of how God has blessed this country. Just think if we shared a border with Africa. Then we’d need a much taller wall and the costs would soar. (Applause)

Limbaugh: This question is for Sen. Cruz. What’s your favorite color?

Limbaugh: What about you, Gov. Bush?

Hannity: Sen. Paul, I’d like to try a word association exercise with you.

Paul: First I want to address something very important that was discussed earlier. Cyan.

Hannity: Let me try this with you, Mrs. Fiorina. When I say Obamacare, what’s the first word that comes to mind?

Fiorina: A failed socialist experiment that was forced down the throats of the American people, which has resulted in thousands of lost jobs, skyrocketing insurance premiums, extreme tornadic activity in the Southwest and a tenfold rise in skin eruptions. (Applause.)

Coulter: Gov. Kasich, when Hillary Clinton goes to prison for her Benghazi crimes, you just know there’s going to be a hue and cry from the liberal media to pardon her. Will you?

Coulter: What about you, Gov. Christie?

Christie: Hell no, I wouldn’t pardon her. I’d make sure she served every day of her sentence.

Cruz: If I could jump in here. I agree with the governor, but I would go further. I would use all the powers of the presidency to make certain she served her entire sentence in solitary confinement.

Christie: I thought that was a given.

Fiorina: I’d also deny her visitors and reduce her food intake to water and dog kibble every other day.

Hannity: That’s all the time we have. I want to thank all the candidates for participating in tonight’s debate.

Bush: You know what? I think I may prefer beige.

Gary Jacobs is a former TV comedy writer and producer. He wrote this for the Los Angeles Times.