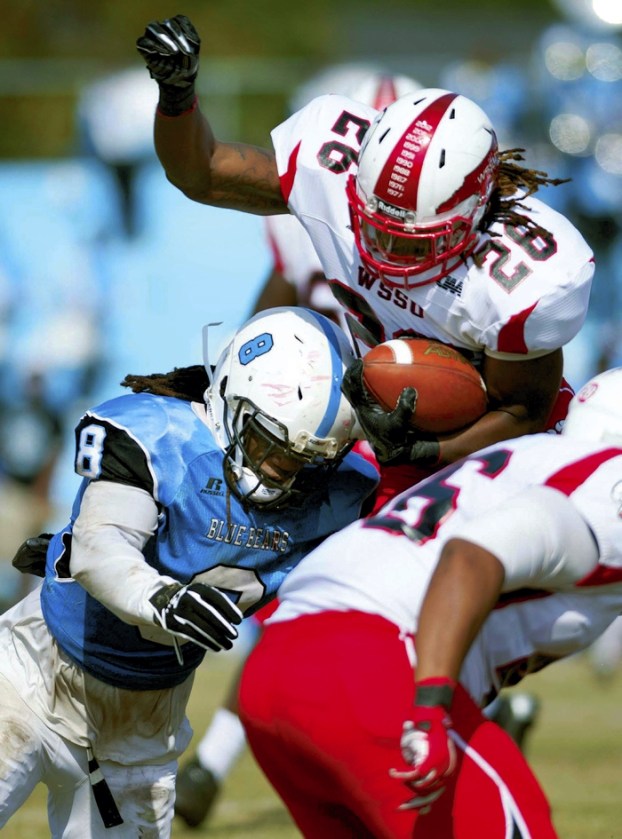 SALISBURY — Two Livingstone players received Player of the Week honors from the CIAA for their performances in Saturday’s dramatic 42-35 overtime win over Fayetteville State.

Marcus Nolan was selected as the CIAA’s Linebacker of the Week and Drew Powell was picked as the conference’s Quarterback of the Week.

Nolan was a tackling machine last Saturday at Alumni Memorial Stadium, sideline to sideline. Nolan, a junior from Knoxville, Tenn., made 18 tackles against Fayetteville State, including six solo stops. Three of Nolan’s stops were for losses of seven yards.

Four-year starter Powell, a senior from Upper Marlboro, Md., completed 28 of 35 passes for 364 yards and two touchdowns. He also rushed for 26 yards and two more scores.

Powell led the Blue Bears to a 35-21 fourth quarter lead before the Broncos rallied to tie the game and send it into overtime. In the extra period, Powell got the Blue Bears into the end zone in just four plays, capped by a two-yard dive by back Latrell Flowers.

Fayetteville State then had a chance to equal Livingstone’s score but free safety Billy Moore intercepted Derek Bryant’s pass at the three-yard line, ending the game.

Despite the interception and six tackles on the day, Moore did not receive honors from the CIAA. The conference’s Defensive Back of the Week was awarded to Shaw’s Bruce Parker Jr., who also ended the Bears’ game in overtime. Shaw won for the first time this season, upsetting Winston-Salem State on the road, 32-25. Parker had two interceptions on the day.

Livingstone is home again this week, hosting the Commemorative Classic against Johnson C. Smith at 1 p.m.

Livingstone and J.C. Smith, then known as Biddle Institute, played in what is now recognized as the first collegiate football between historically black colleges.

The date was Dec. 27, 1892, and Biddle traveled to play on the snow-covered front lawn of  Livingstone College’s Old Delta Grove campus in Salisbury.

The two teams played two 45-minutes halves and Biddle won, 5-0, although there was some controversy to the victory. According to historians, W.J. Trent scored Livingstone’s only touchdown on a fumble recovery.

Biddle argued that the fumble was recovered out of bounds and the snow covered the field’s markings. The official ruled in Biddle’s favor, allowing the score to remain at 5-0.

The two schools have played 63 more times since that snowy day in 1892, with J.C. Smith winning 41 of the games.

Livingstone dominated the series in the 1990s, winning six straight games between 1994 and 1999.

More recently, J.C. Smith has had the upper hand. The Golden Bulls have won eight of the last nine games, going back to 2006, including the last six games.

A win on Saturday would give Livingstone its first winning season in 17 years, so it’s an even bigger game for the Blue Bears. Livingstone is 4-3 overall and J.C. Smith is 4-5.

Livingstone was in the same situation last year, sitting at 5-4 while J.C. Smith came into the game with a record of 2-7. The Blue Bears needed a win for a winning season, but the Golden Bulls prevailed in Charlotte, 31-14.

“We’re excited about this week’s game,” said Livingstone coach Daryl Williams. “Obviously, there is a rich tradition with this rivalry but on top of that, we want to win our last home game and have a winning season — which was one of our goals.”

It appears that Livingstone is out of the running for the CIAA’s championship game on Nov. 14. A win over J.C. Smith would give the Blue Bears a 4-1 record in the Southern Division, but they would be just 4-3 in overall conference games.

The winner of Saturday’s Fayetteville St.-Winston-Salem St. game will have a 5-2 record in CIAA games and that would trump Livingstone’s 4-3 mark.  J.C. Smith would be in the same boat with Livingstone, as the Golden Bulls are currently 3-1 in the division and 3-3 in all CIAA games.

From staff reports Carson hosts North Iredell tonight at 7 p.m. in the first round of the 3A state playoffs... read more