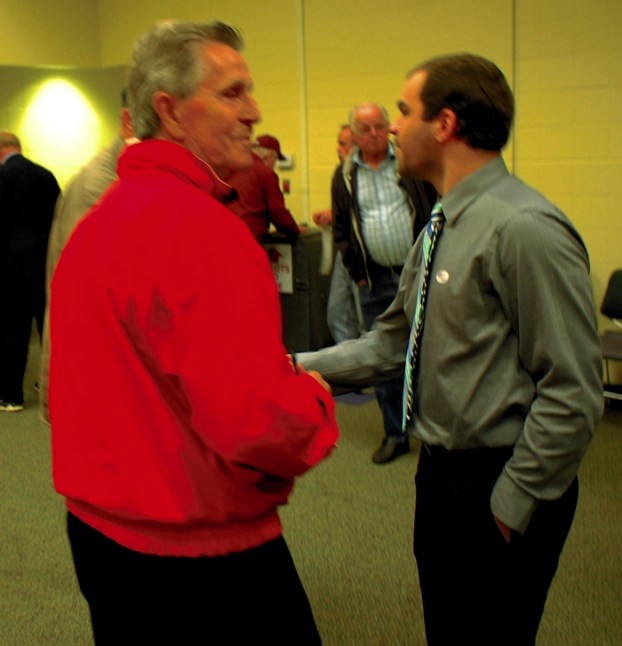 “They liked what we’ve been talking about, and now we’re going to have to deliver,” Mahaley said.

In the race for two seats on the Board of Aldermen, Landis voters again went for change in a big way. Newcomers Seth Moore and Tommy Garver, who joined forces with Mahaley for much of the campaign, ousted incumbents Tony Hilton and Roger Safrit by more than 2-to-1 spreads.

Mahaley, 73, is owner of Village Grill in Kannapolis.

Mahaley, Garver and Moore all made high utility rates (electric and water-sewer) and poor street conditions the main planks in their campaign platforms.

Garver said he doesn’t buy into the present board’s contention that electric rates cannot be lowered, and he promised that at his first meeting in December, he will propose the board look into what the budget can spare so customers will see some kind of relief on rates.

Moore, who is a specialist in anti-money laundering and global financial crimes for Bank of America in Charlotte, said he was shocked and happy in learning he had led the ticket.

“I’m definitely excited about being able to give back to the community,” Moore said. He added his election was an honor and privilege.

Moore took his campaign door-to-door into Landis neighborhoods. He said he received a lot of help from family and acknowledged that Mahaley reached out to him because the issues they were concerned about were similar.

“Our intentions do align,” Moore said, adding his concerns revolved around the high utility rates and trying to spur economic development. Moore said if the town can fix its water-sewer and electric rates and improve its infrastructure, it will help attract new business.

Moore worked more than 12 hours at the Landis poll Tuesday. He is a  fairly recent graduate of the University of North Carolina at Chapel Hill and was valedictorian of his 2010 graduating class at South Rowan High.

When Mahaley printed up some campaign cards, he also included the names of Moore and Garver.

Garver said Mahaley told him if they wanted a new direction it would take at least him as mayor and two new aldermen.

In losing the mayor’s race, Brown is not off the board. He still has two years remaining on the four-year term he won as alderman in 2013.

Landis’ other board member is Dorland Abernathy.

Brown, Hilton and Safrit warned during the campaign that Mahaley’s previous term as mayor was disastrous in financial terms, and Hilton said it led to the town’s going with a town manager form of government so the mayor would not have as much control.

The incumbents also said the board has spent recent years addressing infrastructure needs that had been neglected for a half century while also rebuilding the town’s cash reserves, as required by the Local Government Commission.