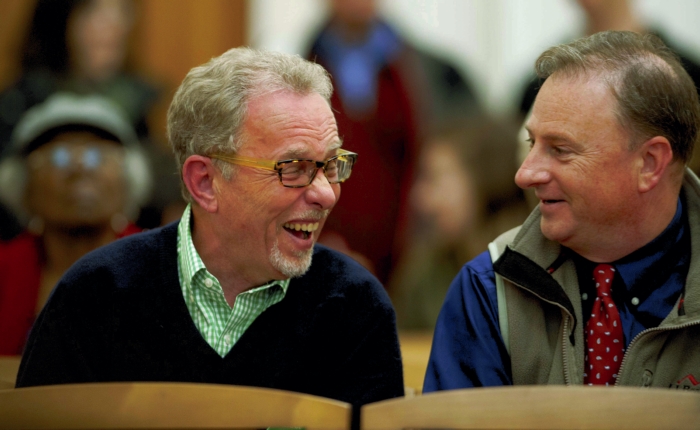 New Spencer Mayor-elect Jim Gobbel shares a laugh with David Lammano., who won election to the Spencer town board in 2015.

The citizens of Spencer have chosen Jim Gobbel as their new mayor.

Since former mayor Jody Everhart decided not to run for re-election, the position was open to new candidates. Scott Benfield and Bob Oswald also ran for mayor.

Gobbel gained an early lead and ended up with about 52.7 percent of the vote with 222 votes.

Gobbel, 65, has served as mayor pro-tem during his last two terms on the Spencer Board of Aldermen. He is retired from Miller Brewing Co. and went to Spartanburg Technical College and Rowan-Cabarrus Community College.

“I’m anxious to start working with my new board,” Gobbel said.

Gobbel said his first priority will be hiring a new town manager, but would also like to address Spencer’s empty storefronts while reworking what the board has been doing in the past to make it easier for businesses to come and stay in Spencer.

“We have many great neighborhoods but in our core area, it needs some work,” he said.

Gobbel said he is ready to work hard for the citizens of Spencer.

“I really thank the people of Spencer for putting their confidence in me … and let me go to work for our town,” Gobbel said.

There were seven candidates running for the six open seats on the Spencer Board of Aldermen. Reid Walters resigned in September, and Alderman Jeff Morris did not file for re-election.

For Chillcott, it was her first time running. She had the most votes and is now mayor pro-tem.

“I didn’t even think I’d get that many votes, and then to come out as mayor pro-term, it’s just unbelievable,” she said.

Chillcott said there are a lot of new plans in the works for Spencer.

“We are just excited about getting started and getting going and making Spencer what we know it can be,” Chillcott said.

After hiring a new town manager, Jones said the board should concentrate on getting to know each other.

“We need to get the new board in place and on the same page so we can figure out where we’re going to go,” he said.

Jones said the board members were concerned about property value issues, getting more people to live in the town and changing the perception of the town.

Lamanno said he was excited that he received the third most votes, especially since it was his first time running.

He said he wants to rewrite the town manager ad so that they can attract the best person for the job.

Boone said he was pleased with how the election turned out, and after hiring a new town manager, he wants to work on the town’s codes.

Smith said he was excited for what is to come.

Smith said economic development and improving the community were his top priorities for his term.

White said economic development is one of the most important things to concentrate on. He said he has a lot to learn in the realm of politics, but he is looking forward to it.

“I want to thank everybody who came out to vote period. Whether they voted for me or not,” he said.