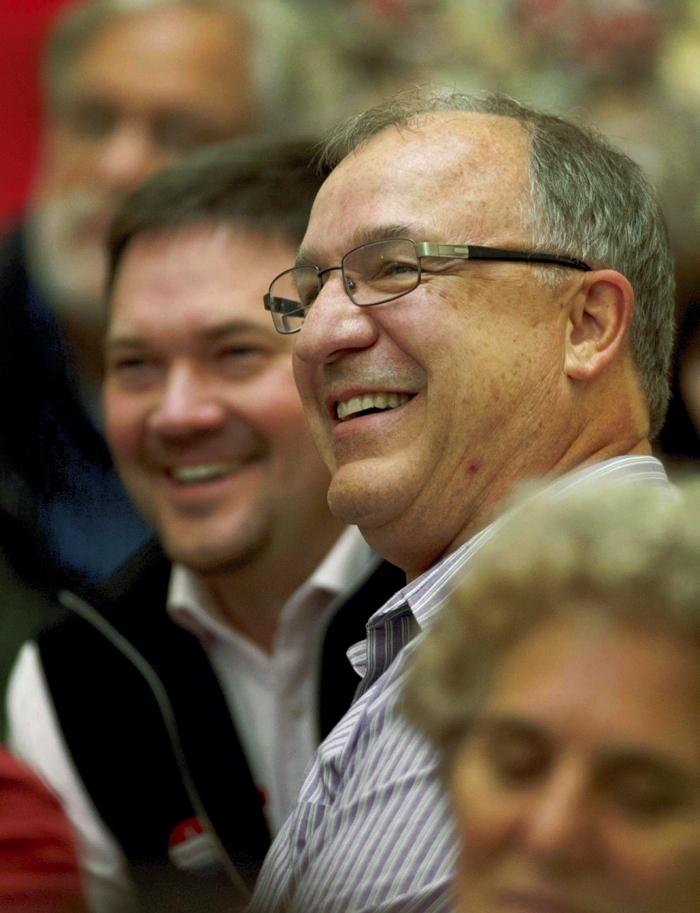 GRANITE QUARRY — Bill Feather shed a little bit of his modesty Tuesday and finally recognized that, yes, he is a part of Granite Quarry history.

“I’m proud of being the first elected mayor in Granite Quarry, and I’m proud to have the opportunity,” he said.

Granite Quarry voters elected a mayor separately for the first time Tuesday, thanks to a change the town board made in the electoral process heading into the 2015 municipal election.

Feather ended up being unopposed for the mayor’s job, which is a two-year term. Also elected to four-year terms as aldermen were Jim LaFevers, an incumbent, and newcomer Jim Costantino. They likewise were unopposed for the two seats up for election this year.

For the record, Feather received 86 votes in the balloting; Costantino, 85; and LaFevers, 76. There were five write-in votes for mayor and two for aldermen.

So the new Granite Quarry town board in December will include Feather as mayor and LaFevers, Costantino, Mike Brinkley and Arin Wilhelm as aldermen.

Mary S. Ponds did not seek re-election as alderwoman. She has served on the board 16 years, including 14 years as mayor. Feather has been mayor for the past two years since the board chose him over Ponds.

Before changing the electoral process to provide for a separate mayoral race, the town board members selected a mayor among themselves after every two-year election.

Feather said he looked at his election in two ways. From one aspect, he was disappointed that no one else ran for the position.

From another point of view, he was grateful people thought enough of him not to put up any opposition. “It sure made the process a lot easier,” Feather said.

Even though his election was essentially a lock, Feather still manned the Town Hall polling location for extended periods of time Tuesday.

Feather said he thought having an elected mayor makes for better town government. The mayor is now more responsible to the electorate — and not fellow board members.

Feather, 58, is a commercial property consultant for his own business, Concord Consulting Associates. He looks forward to the town’s continuing work on a downtown revitalization plan, a new subdivision off Faith Road and a new industrial park in cooperation with Rowan County — and what they all could mean in terms of growth.

Feather said he also hoped the new board could show progress in bringing a grocery store to Granite Quarry.

Costantino actually has some experience on the board. Owner of the Jim Costantino Insurance Agency located at the Brinkley Center, he served a year as alderman after he was appointed to fill an unexpired term in 1998. He lost his election bid for the seat in 1999.

Costantino, 65, has been affiliated with Allstate Insurance since 1987, and he opened his Granite Quarry office in 1995.

LaFevers is in the midst of his second stint on the town board. He served as an alderman from 2001-2005, and was elected again in 2011. LaFevers, currently serving as mayor pro tem, is a retired construction manager and general contractor.

Candidates in the Faith municipal election also were unopposed for the five spots up for grabs this year.