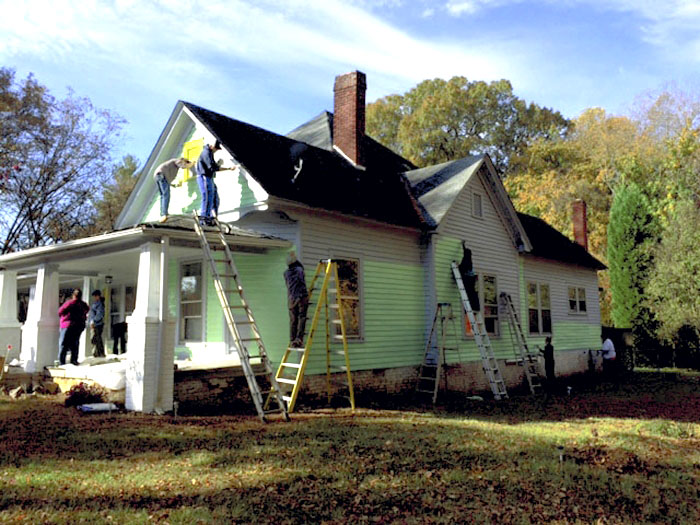 SPENCER — An enthusiastic group of Saturday volunteers — 26 in all — applied kiwi green, daisy yellow and snowbound white to transform the early 20th century home of Evan and Darlyn Baldwin.

It was Spencer’s first Paint Pals Project and reflected a partnership between the town of Spencer and Historic Salisbury Foundation.

The Baldwins live at 803 Third St., the first house on that street within Spencer’s residential historic district.

“We had a great day,” Spencer Land Management Director Kathryn Clifton said. “I was extremely pleased with how our first Paint Pals project went. “… It was great to see everybody working together.”

Brian Pfaff, a carpenter in Salisbury, did much of the preparation work, including scraping and priming.

“It turned out to be an all-day project,” Clifton said, describing how work started at 9 a.m. and materials weren’t packed away until 5:15 p.m.

In Spencer, the goal of Paint Pals is to paint one house in the residential historic district per year. Clifton said the program qualifies applicants, who must own the home to be painted.

It also looks to assist a family in need who live in the historic district. Evan Baldwin is on disability. Clifton said the program will accept applications for the next Paint Pals Project in February 2016 and hope to paint the next house the summer of 2016.

“We got lots of support,” Clifton said.

Sherwin-Williams donated all the paint, Food Lion in Spencer provided a gift card to pay for water and snacks. Hendrix Barbecue of Spencer donated barbecue sandwiches for the volunteer work crew; Krispy Kreme, coffee and doughnuts.

Lowe’s gave the project a substantial discount for any supplies that were needed.

Brian Davis, former executive director of HSF, told Clifton about a similar Paint Pals Project started in Galveston, Texas, where he had previously worked for the preservation foundation.

The Galveston preservation group sent her all its information on Paint Pals and a member also made a monetary donation, Clifton said.